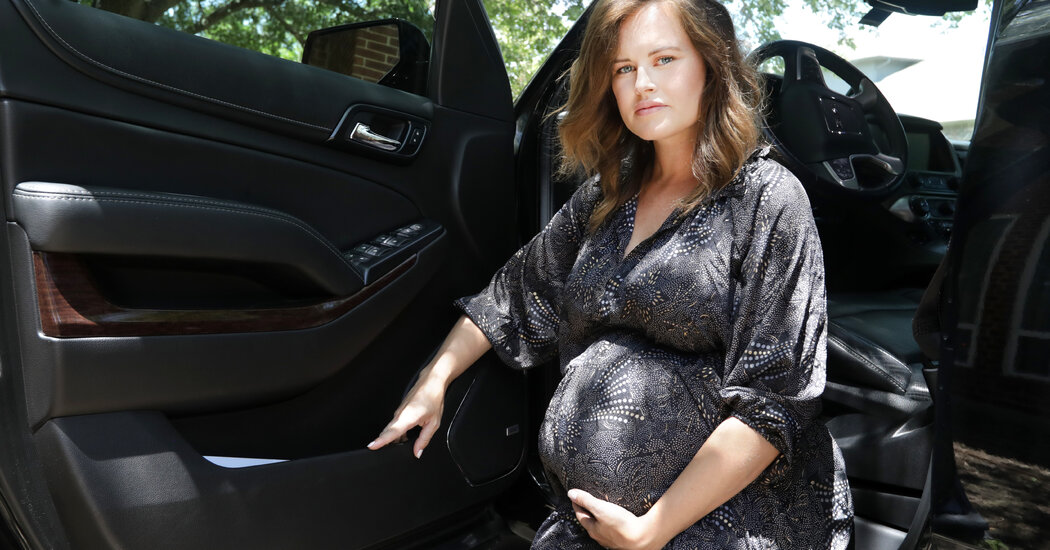 A woman in Texas said that, under the state’s abortion ban, she and her fetus qualified for the car pool lane. The argument could go well beyond driving.

A fundamental question in the abortion debate — when does a person’s life begin? — raises issues that extend far into the reaches of everyday life.

Even, perhaps, who gets to drive in an H.O.V. lane.

Last month, Brandy Bottone of Plano, Texas, was pulled over by a Dallas sheriff’s deputy and given a ticket for driving alone in a high-occupancy vehicle lane. But, she argued, she was not alone. Ms. Bottone told the officer that she did not commit a violation because, by her logic, Texas’ abortion ban meant there were two people in her car, and she pointed to her belly.

“The law says two or more persons; and I counted the baby as a person,” said Ms. Bottone, who was in her third trimester of pregnancy. “So I was like, that makes sense to me.” She was issued a $275 ticket.

Ms. Bottone’s defense, first reported in local outlets including The Dallas Morning News, was considered by many to be unusual, and the stakes of the particular case might seem relatively low. But legal experts said that in the wake of the Supreme Court’s overturning of Roe v. Wade, the incident raised a host of complicated legal and philosophical questions about what defines a person and how shifting definitions might soon filter out into other aspects of policy.

The Texas penal code recognizes an individual as including an unborn child “at every stage of gestation,” but, unlike a few states, Texas has not passed a so-called fetal personhood bill related to abortion. Some legal experts said it was doubtful that the state’s definition would protect a pregnant woman in a traffic stop.

“There’s a difference between banning abortion and recognizing personhood legally,” said Mary Ziegler, a law professor at the University of California, Davis, who has written several books on abortion and the law.

Many states, including Texas and California, define a fetus as a person in cases involving homicide.

For instance, one of the victims in a 2017 mass shooting in Sutherland Springs, Texas, included a woman who was pregnant. Texas included the unborn child in its final tally of victims.

In another high-profile case, Scott Peterson in 2004 was convicted in California of murdering his wife and unborn child. His wife, Laci Peterson, was eight months pregnant when she was killed.

Even if Ms. Bottone’s objection to her traffic ticket for driving alone in a car pool lane seemed unlikely to gain much legal traction, it did raise the prospect of future legal — and philosophical — debates.

“I think what this person is saying is more like anticipating where the law may go than where it is now,” Professor Ziegler said. “I think we will not see the end of these arguments in other conservative states, even if Texas law doesn’t yet support this particular woman.”

Ms. Bottone, a 32-year-old marketing director and mother of three children, said she was not trying to make a statement about abortion or the Supreme Court’s decision. She said she did not consider herself for or against abortion rights, and declined to share her view on the court’s overturning of Roe. Ms. Bottone said she was expected to give birth to her fourth child in early August and sees a “34-week-old baby as a person.”

Ultimately, Ms. Bottone said she just wanted to know whether she could keep driving in the H.O.V. lane for the remainder of her pregnancy, as she said she had in her previous pregnancies, long before the overturning of Roe. She said she was looking forward to her court date on July 20, two weeks before her baby is due.

Advocacy groups, though, spoke of the case in the context of the broader abortion debate.

Kim Schwartz, a spokeswoman for Texas Right to Life, the largest anti-abortion organization in the state, said in a statement that it supported Ms. Bottone along with the idea that fetuses “should be recognized as Texans in all areas of society.”

Three states have passed language into law broadly defining an unborn child as a person in the past decade. Alabama passed an amendment to its State Constitution in 2018 guaranteeing “the rights of the unborn child in all manners and measures lawful and appropriate.” Georgia passed a law recognizing the personhood of fetal life in 2019, and Arizona did so in 2021.

Because the provisions were all passed in the era of Roe, when abortion was established as a constitutional right, they were immediately challenged in the courts and have yet to go into effect. On Monday, Arizona’s fetal personhood law was temporarily blocked when a U.S. District Court ruled that it was “intolerably vague because it is entirely unclear what it means to construe and interpret Arizona law to ‘acknowledge’ the equal rights of the unborn.”

But since the Supreme Court issued its ruling last month, Prof. Ziegler said, debates over fetuses and personhood have represented a next step for anti-abortion activists.

Elizabeth Sepper, a law professor at the University of Texas at Austin, said acceptance of a fetal personhood standard would create new complications in all sorts of public policy realms. It could create new uncertainties around matters involving in vitro fertilization and the treatment of fertilized embryos, as well as exceptions to abortion bans in cases of rape and incest.

Ballot initiatives to define life as beginning at conception have failed in states such as Colorado and Mississippi, after medical providers warned that such laws could make some I.V.F. procedures illegal.

Prof. Ziegler said a new legal definition of fetal personhood could also have sweeping implications on matters such as welfare, tax credits, child care and even population counts.

“Georgia’s law spells out that once a fetus is 6 weeks old, then you can claim that person as a dependent on tax returns,” she said. “That fetus is counted as a person basically for census purposes.”

See you on the battlefield: Suvendu challenges Mamata after her announcement to contest from...

Pakistan will continue to remain on FATF Grey List