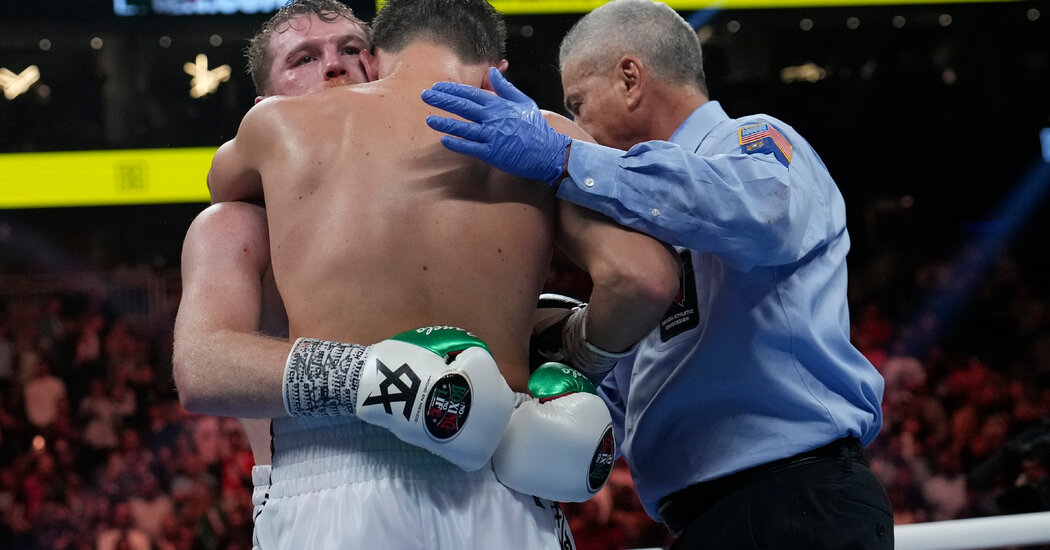 For all his successes and talent, Gennadiy Golovkin is destined to be remembered as Saúl Álvarez’s foil.

LAS VEGAS — Two days before they met in the ring, Saúl Álvarez and Gennadiy Golovkin sat behind a long table at a theater in the MGM Grand on the Strip. The theater normally houses Ká, one of Cirque du Soleil’s most high-flying productions, and offered an unfortunate contrast to the fighters’ perfunctory performance in answering questions from the promoter Eddie Hearn. Shortly after the news conference ended, Golovkin slunk out a side door.

Álvarez, however, stuck around for photographs. He posed with five belts, three on one arm and two on another, representing W.B.A., W.B.C. I.B.F., W.B.O. and The Ring magazine titles. Next to him stood Eddy Reynoso, his longtime trainer, holding a trainer of the year award plaque, as thousands of adoring fans yelled at them in Spanish.

Golovkin, for all his success, talent and victories, is destined to be remembered as the foil to Álvarez. To be remembered as the fighter whose greatest value lay in providing a canvas for Álvarez, known as Canelo, to paint on. It was even the case before their first fight, in which Golovkin held the middleweight belts and was the slight favorite, and it is certainly the case five years later after Álvarez won Saturday night’s bout in dominant fashion.

The fight, four years in the making, was the third time these two boxers competed against each other in five years. The first fight, in 2017, ended in a controversial draw even though most observers felt that Golovkin, of Kazakhstan, was the victor. Álvarez, who is from Mexico, won a narrow majority decision in the second contest in 2018.

Golovkin, then, over the course of 24 rounds, stuck as closely to Álvarez as anybody has. That he has contested few other barn burners with fighters equal to his talent is perhaps down to his well-deserved reputation.

Golovkin, 40, is such a fearsome puncher — he has won all of his professional fights against boxers not named Saúl Álvarez, and almost all of them by knockout — that he is regularly avoided. He had to wait two years for Álvarez, 32, to agree to fight him the first time, and four years for Álvarez to agree to their trilogy fight.

On Saturday night, however, he was not particularly threatening. Golovkin spent the first two-thirds of the fight weakly probing with his left jab and tagged Álvarez with damaging punches only when he abandoned caution late. “This fight is so smart,” Golovkin said afterward when asked how it differed from their first two bouts. “More tactical, like chess.”

It was a generous self-evaluation, confusing timidity for tactics. Golovkin won most of the later rounds on the judges’ scorecards, and he has to wonder what would have happened had he begun the fight aggressively. But he has often been a slow starter, and perhaps at his advanced age Golovkin is unable to sustain fighting on the front foot for 12 rounds.

“Probably it was a tactical mistake on my fight to start slow,” he conceded, though he added that he had wanted to see how the fight would develop.

After being on the raw end of judging decisions in their first fight, and maybe their second fight, too, Golovkin finally got the benefit of the doubt. The judges scored the fight 116-112, 115-113 and 115-113 in favor of Álvarez, scoring that did not do Álvarez’s dominant win justice.

Álvarez entered the fight coming off just the second loss in his career, a surprising upset to Dimitry Bivol in May. But Álvarez’s first loss in nine years did not dampen his fans’ enthusiasm. Fight weekends are always big in Las Vegas, and this time tens of thousands of Mexicans and Mexican Americans descended on The Strip to celebrate Mexico’s Independence Day, which was on Friday, in proximity to its favorite fighter.

Álvarez walks through crowds like the worldwide superstar he is. He cannot go anywhere in public without being surrounded by an entourage of dozens, with those dozens being surrounded by screaming thousands. There is law enforcement, private security, friends, family, trainers, videographers and guys whose jobs seem to be simply carrying his belts. Sometimes there are two guys freestyle-rapping about Canelo. Witness it just once and “Canelo! Canelo!” will forever be stuck in your head.

But while the defeat to Bivol this spring did not diminish Álvarez’s allure, it did change him. “I have shown that defeats are great, because they allow you to come back and show humility,” Álvarez said Saturday in the ring after his victory. It was perhaps an incongruous statement coming from Álvarez, ever the showman, considering he was wearing a crown as he said it.

The king of his rivalry with Golovkin certainly, finally. But even in victory the questions Bivol raised remain. This was not the Canelo who shattered the face of Billy Joe Saunders last year, or who defeated Sergey Kovalev as light heavyweight in 2019.

“I need to rest my body,” said Álvarez when asked if he wanted a rematch against Bivol next. “I need to rest my hand, my body, but I will come back stronger.” He said that he injured his left hand when defeating Caleb Plant last November and that the injury was so bad that he cannot hold a glass and might need surgery.

Whether he fights Bivol next, or somebody else, it seems Álvarez’s future resides in the super middleweight and light heavyweight divisions, one more reason his struggle with Golovkin is finally over. Golovkin has fought his entire career at middleweight — that’s what their first two bouts were contested at — and moved up to super middleweight only once, for Saturday’s fight. Their paths have diverged.

Golovkin said before the fight that he had many options no matter the outcome, perhaps anticipating what was next: Questions about retirement. “Remember, I’m still champion at 160,” he responded. “I come back, guys, I’m still champion.”

He then went and embraced Álvarez, a surprising act of post-fight equanimity. Their relationship at one point was professional or even warm — a much younger Álvarez sparred with Golovkin a few times at a training camp in Big Bear Lake, Calif. — but by the time of their second bout it had descended into acrimony. After the fight was delayed while Álvarez served a suspension for testing positive for clenbuterol (he blamed tainted meat he ate in Mexico and said he stopped eating beef), Golovkin called his onetime sparring partner a drug cheat.

“He’s not honest,” Álvarez told TMZ about Golovkin in the leadup to the fight. “He pretends to be a good person and be different, but he’s not.”

Maybe genuine animosity, or maybe just pre-fight smack talk designed to rile up fans. Whatever it was, the instant the bell rang for the final time the bad blood seemed to wash away.

Later, after the arena had long emptied out, Golovkin returned the favor. “We congratulated each other, said ‘excellent fight,’ and we moved on,” he said, adding: “At this level, this sport is so dangerous. We were very content with how this fight played out and how the rivalry ended.”

Parineeti Chopra on The Girl On The Train: Comparison with Emily Blunt bound to...