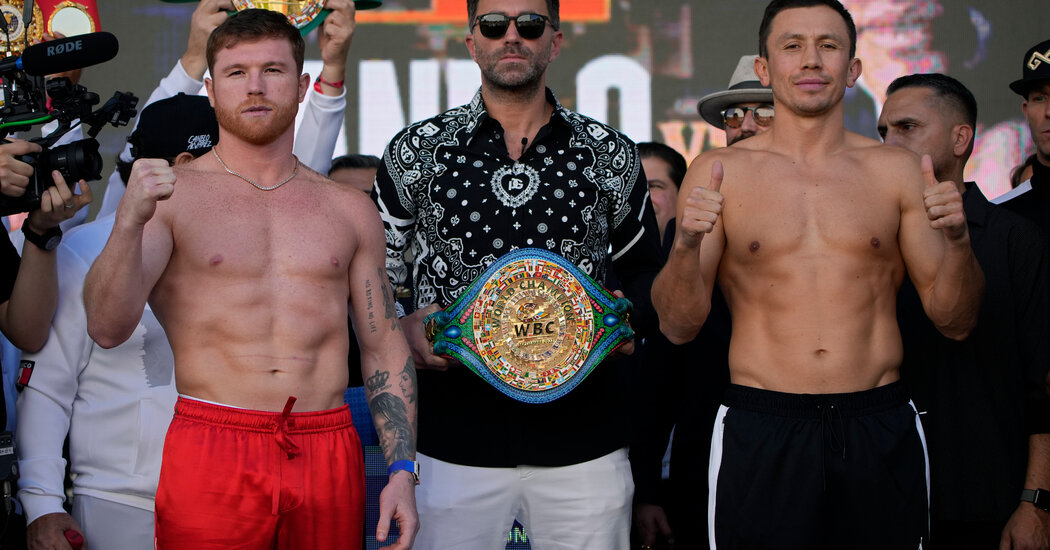 Saúl Álvarez and Gennadiy Golovkin, the fighters nicknamed Canelo and GGG, are expected to take the ring about 11 p.m. Eastern for their bout carried on DAZN pay-per-view in the United States.

Saúl Álvarez, who is known widely as Canelo, will take on Gennadiy Golovkin in a super middleweight showdown from Las Vegas on Saturday night.

The main card begins at 8 p.m. Eastern (5 p.m. Pacific), and you can tune in as early as 5 p.m. Eastern for the early preliminary fights. while Álvarez and Golovkin are expected to enter the ring around 11 p.m. Eastern, depending on the timing of the earlier bouts.

In the United States, and in most of the rest of the world besides Latin America, the fight will be carried on DAZN, a sports streaming service that has struggled to win viewers.

For current subscribers to DAZN, the pay-per-view fight will cost $65, but for nonsubscribers it will cost $85, with a month of DAZN included in the fee. The fight can also be purchased through more traditional cable and satellite providers.

In Mexico, the fight can be seen on TV Azteca.

As befits a boxing trilogy, what looks to be a straightforward fight — Álvarez, a heavy favorite, wringing a solid payday out of the continued interest in a bout against Golovkin — is anything but.

Álvarez and Golovkin (who is nicknamed GGG) are competing at a new weight, Álvarez is coming off a loss for the first time in a decade and both fighters will be hunting for a knockout.

Here are some things to watch for in the bout:

Álvarez has more experience fighting at this weight.

Unlike their first two bouts, which were fought in the middleweight division, at 160 pounds, the third fight between Álvarez and Golovkin is being contested at super middleweight, 168 pounds.

It is hard to remember now, but Álvarez fought most of his early career at super welterweight (154 pounds), only finally moving up to middleweight for the first two fights against Golovkin. But in the last few years he has fought at super middleweight and even at light heavyweight (175 lbs.), which is where he lost to Dmitry Bivol in May.

Golovkin, on the other hand, has spent his entire career in the middleweight division; this will be the first time he has ever gone up a division.

That opens up several questions for this fight: Golovkin is one of the greatest knockout artists in boxing history, but how will his power translate going up in weight and against a beefier Álvarez? Can Álvarez rebound from just the second loss in his professional career at a weight he is more comfortable at? And finally, how does what both fighters think they know from their first two bouts change in a different weight class?

Álvarez has said he’ll be seeking a knockout. That’s a tall order.

Supposedly (always take boxing lore with a grain of salt), it never happened in his amateur career either.

All week long, however, Álvarez has been boasting that the fight will not go to a decision. “The pressure I have put on myself is to finish this inside the distance of the 12 rounds,” Álvarez told reporters at a news conference during the week.

Golovkin might want the fight out of the judges’ hands.

Golovkin and Álvarez have fought two extremely close fights. Their first was a draw, and Álvarez was only narrowly decided as the victor in the rematch. To some, Golovkin won both fights, especially the first one, where one judge, Adalaide Byrd, turned in a scorecard that read 118-110 in favor of Álvarez, and was widely derided immediately afterward.

“118-110 for Canelo. No, that did not happen,” the HBO announcer Jim Lampley said after the scorecards were revealed. “That is fiction, unfortunately.”

An astonishing 84 percent of Golovkin’s fights have ended with him knocking out his opponent. If he can knock out Álvarez, it won’t matter what the judges have on the scorecards.

Álvarez is coming off his first loss in nine years?

Álvarez has only been beaten twice: once when he was just 23 against Floyd Mayweather Jr. in 2013, and much more surprisingly to Bivol earlier this year.

The recent loss could just be written off as the price Álvarez paid for fighting in a division he is unsuited for. But it could also have signaled that Álvarez is not quite as untouchable as he was thought to be.

Will any doubt creep into Álvarez’s game, or will he be back to the same dominant fighter he has always been?

Is this Golovkin’s last stand?

After beginning his career in the boxing hinterlands of Germany, Golovkin rocketed to stardom in the 2010s with a series of knockouts and title wins, leading up to his first two fights against Álvarez. But since then, his career has petered out some even as he has regained some of his titles.

Golovkin is 40, and his best days in boxing are clearly behind him, even though he says he will continue to fight. Can he turn back the clock and defeat Álvarez, giving his career a marquee victory? Or will this be his last big fight as Golovkin fades from the limelight, as all athletes, no matter how good they were, eventually must do.

A big payday on Saturday night certainly rewards Golovkin for years of buildup as a fearsome fighter and worthy adversary for Álvarez. But a win would almost certainly immediately renew that marketability and make him a fighter that others would pursue for bouts.

We now have provided assistance, we are getting help: international Secy Shringla on foreign...

AUS vs IND: KL Rahul ruled out of Test series with wrist injury