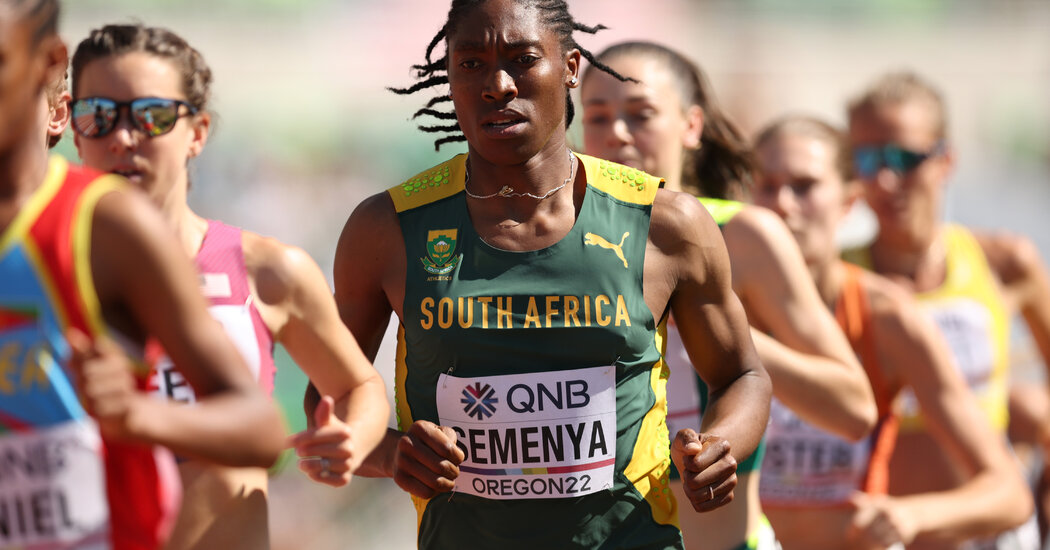 Caster Semenya of South Africa, the two-time Olympic champion and three-time world champion at 800 meters, is not permitted to compete in her favorite event this week at the world track and field championships because of rules governing intersex athletes and permissible testosterone levels in events from the quarter mile to the mile, which combine speed and endurance.

But Semenya was able to run the 5,000, a race of 3.1 miles. It is not governed by the regulations for athletes like Semenya, who are classified as having a disorder of sexual development — a genetic variant known as 46, XY DSD — and who possess both X and Y chromosomes, the standard male pattern.

Semenya, 31, did not achieve the qualifying time of 15 minutes 10 seconds in the 5,000, but others ranked ahead of her did not compete, so Semenya was added to complete the field.

She failed to advance beyond Wednesday’s semifinal heats, finishing 13th in her heat with a time of 15:46.12. But she certainly added intrigue to an event that featured the Tokyo Olympic champion at the distance, Sifan Hassan of the Netherlands, and the world-record holder, Letesenbet Gidey of Ethiopia, who won the 10,000 at these championships. The final of the event is scheduled for Saturday evening.

Semenya, who was assigned female at birth and identifies as female, has proclaimed, “I am a woman and I am fast.” But in a highly charged case about biological sex, gender identity and fair play, she has lost challenges to compete in the 800, without lowering her natural testosterone levels, in the Swiss Supreme Court and the Court of Arbitration for Sport, or CAS.

CAS ruled in 2021 that World Athletics, the governing body of track and field, had imposed “discriminatory” rules governing intersex athletes, but that the rules were “necessary, reasonable and proportionate” in providing a level playing field in certain running events.

World Athletics argued that intersex athletes have an unfair advantage in lean muscle mass, strength and oxygen-carrying capacity. The lowest level in the male testosterone range is four times greater than the highest level in the women’s range, according to the governing body.

But Semenya’s case is complicated. Scientists have not been able to determine the precise impact of testosterone on performance. Last year, World Athletics corrected its own research, saying it could not find a causal relationship between high levels of testosterone and enhanced athletic performance among elite female athletes.

Semenya has declined to take hormone therapy to reduce her natural testosterone levels, saying it would imperil her health. She has also called the rules that prevent her from running the 800 a violation of her basic human rights. She has an ally in the World Medical Association, which says the World Athletics regulations are based on “weak evidence.”

But the requirements for competing in women’s races may get even stricter.

Track and field is expected by many to enact a rule recently imposed by FINA, swimming’s world governing body, involving the separate but related topic of transgender athletes. The FINA rule effectively bars transgender women from competing at the highest international levels unless they began medical treatments to suppress the production of testosterone before going through one of the early stages of puberty, or by age 12, whichever occurred later.

Military chopper crash: Why the rescue ops are tough