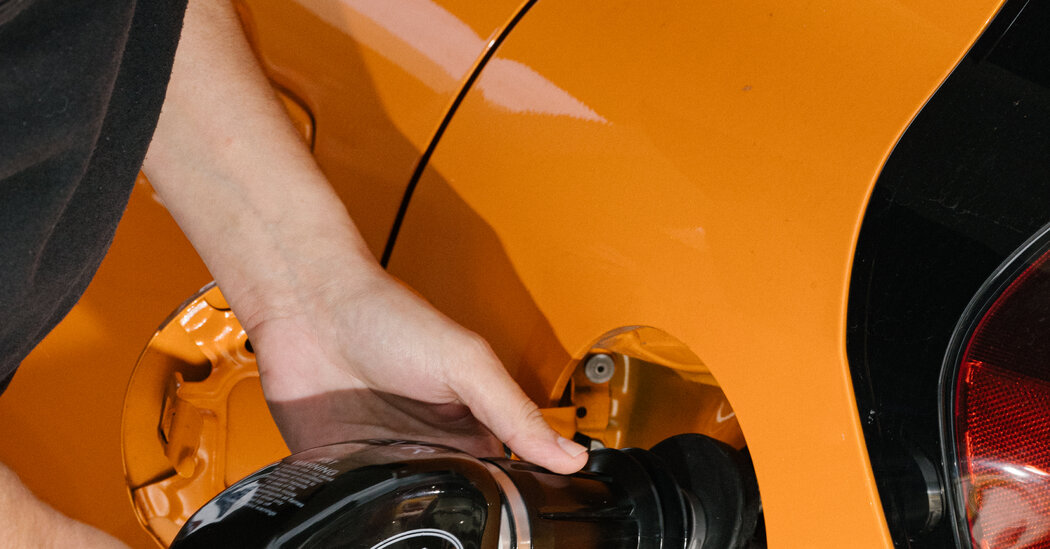 Prices have now fallen for more than a month.

After months of gas prices making life more expensive, they have quietly started to go down — providing financial relief for many Americans.

The average nationwide price this week was $4.49 a gallon, down from a peak of $5.01 in June. The average price of gas is still about $1.30 higher than it was a year ago, but it has now fallen for more than a month.

That is welcome news for consumers: Higher gas prices affect not just people filling their cars but also, through higher transportation costs, the price of almost everything else.

Falling prices are also potentially good news for political and social stability. Because gas prices are so visible — posted on giant signs across the country — they have an outsize impact on how Americans feel things are going, experts say. The sentiment can extend beyond financial concerns.

Historically, rising gas prices have also hurt incumbent political leaders. Sure enough, approval ratings for President Biden and European leaders have fallen as the prices of gas and other goods have increased. Unchecked, it is the kind of widespread disapproval that can lead to global political instability and extremism. In Italy, for example, the recent collapse of the government could give way to a takeover by a far-right alliance that includes a political party with neo-fascist roots.

But gas prices also get at something deeper than partisan politics or any individual policy debate: They help dictate the public mood. As the pandemic has waned, Americans have hoped for a return to normal. But rising gas prices and inflation, along with an increase in violent crime and the war in Ukraine, instead feed into a broader sense of chaos and anomie already fueled by Covid. It is as if Americans have traded some crises for others.

“Is this for real?” Caroline McNaney in New Jersey recalled thinking. “I took a job further from home to make more money, and now I feel like I didn’t do anything for myself because gas is so high.”

Falling gas prices, then, offer the kind of reprieve people have wanted after a few chaotic years.

Several factors are behind the good news. Oil and gas production has ticked up in the U.S. and elsewhere, increasing supply. Some people are driving less to avoid high prices, decreasing demand. Continued Covid disruptions, particularly in China, have also played a role; lockdowns lead to fewer people traveling, further reducing global demand for oil and gas.

The process is playing out slowly — a result of what experts call the “rocket and feather” effect: Gas prices tend to rise quickly, like a rocket, and fall more slowly, like a feather. Gas stations are quicker to increase prices and slower to reduce them to maximize profits. And while rising gas prices drive consumers to comparison-shop more, falling prices ease the need to do so — reducing competitive pressure.

Since gas prices fall more slowly than they rise, they still have room in the coming weeks to drop further — to catch up with reduced oil prices, said Christopher Knittel, an economist at M.I.T.

And as strange as it may sound, a weakening economy could help further reduce gas prices. The Federal Reserve has recently increased interest rates, raising the cost of borrowing in an effort to pull down demand and tame inflation. That could lead to more unemployment, but also to a slowdown in price increases after months of record inflation.

Beyond a few weeks, the future of gas prices is less certain. “There are still risks out there,” said Rachel Ziemba, an energy expert at the Center for a New American Security.

Among them: More atrocities in Ukraine could further push Europe to stop buying Russian oil and gas. Russia could retaliate against Western sanctions by withholding its shipments, tightening worldwide supply again. Climate change continues to make oil and gas companies cautious about boosting production too much. China’s economy could improve and increase demand, particularly if Covid restrictions ease.

But for now, falling gas prices are one bit of good news during a summer marred by headlines about inflation, war, heat waves and rising Covid cases.

To understand the fall of Roe, look at the Supreme Court’s embrace of religious doctrine, Linda Greenhouse writes.

David Brooks asks: Is life a story or a game?

It’s never too late: to learn the tango and fall in love.

Survival plan: He thought he had built the safest house in Kentucky. Tragedy found him anyway.

Advice from Wirecutter: How to delete your tweets — and why you should.

Lives Lived: Werner Reich was a frightened 16-year-old prisoner at Auschwitz when a fellow inmate, a magician, taught him a card trick. It changed his life. He died at 94.

Kyler Murray gets his deal: The Arizona Cardinals quarterback had been clear he desired a new contract, and yesterday the team obliged with a five-year, $230.5 million deal ($160 million guaranteed). It’s the second-highest average annual value ($46.1 million) in N.F.L. history.

Paul Goldschmidt’s quiet ascension: The Cardinals slugger is the overwhelming favorite for National League M.V.P., though you’d never know it judging by the headlines. His teammates call him a “robot.”

Why are the “Three True Outcomes” down? Home runs, walks and strikeouts are all down across baseball. Ken Rosenthal and Eno Sarris dig into the trend that has league executives baffled.

“Nope,” in theaters today, is one of the summer’s feverishly anticipated movies. That’s because the film’s director, Jordan Peele, has become Hollywood’s best bet for a good time.

This is Peele’s third film, after “Us” and the politically pointed “Get Out,” which satirized post-Obama race relations to nightmarish effect. As A.A. Dowd writes at The Ringer, audiences associate Peele’s name with mind-bending thrillers, much as they did with M. Night Shyamalan in the early 2000s. “What really links the two,” Dowd writes, is “an affinity for the place where horror, science fiction, and drama intersect.”

The Times review: Does “Nope” live up to the hype, our critic asks? Yup.

Salt and pepper tofu is crispy on the outside and pillowy on the inside.

Riku Onda is a fixture of Japanese suspense literature. Her novel “Fish Swimming in Dappled Sunlight” is a dreamy psychological thriller.

“The Gray Man,” a big-budget action film starring Ryan Gosling, has “a screenplay that is an assault of amusement.”

How well did you keep up with the headlines this week?

The pangram from yesterday’s Spelling Bee was optimal. Here is today’s puzzle.

P.S. Scott Blumenthal, an editor who has worked on our weekly news quiz, is leaving The Times to explore a career as a chaplain.

“The Daily” is about the Great Salt Lake. “The Ezra Klein Show” examines America’s struggle to address its mental health crisis.