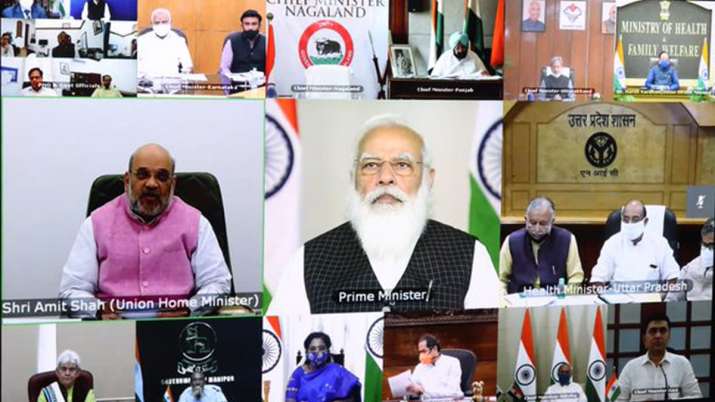 Prime Minister Narendra Modi on Wednesday stressed on the urgent need of stopping the ’emerging second peak’ of coronavirus cases in the country. During a virtual interaction with chief ministers, PM Modi said that the spike in Covid cases in some states such as Maharashtra, Punjab, Madhya Pradesh was a cause of concern and highlighted that the mantra for the people should be ‘dawai bhi, kadai bhi’.

PM Modi asked the states to focus on effective contact tracing and micro-containment zones to control the surge in cases.

“We have to immediately stop the emerging second peak and take big and decisive steps. The self-confidence that we gained in our corona fight should not turn into overconfidence,” PM Modi said warning against any carelessness.

ALSO READ: THESE 5 states account for over 70 per cent of daily COVID-19 infections

He also stressed that increasing RT-PCR tests for effective tracking is important. The prime minister also raised the issue of wastage of vaccine in states like Telangana, Andhra Pradesh and Uttar Pradesh.

Today’s meeting came in the backdrop of a fresh wave of coronavirus in the country. According to the Union Health Ministry data, a total of 28,903 cases, the highest so far this year and an increase for the seventh day in a row, have been recorded in the last 24 hours, taking the COVID-19 tally to 1,14,38,734. The death toll increased to 1,59,044 with 188 new fatalities, the highest in around two months.

The Centre is planning to ramp up the inoculation exercise amid a rise in infection in some states. PM Modi’s interaction with the CMs is not new, an exercise which he has been holding regularly since the outbreak of the pandemic. Modi’s last interaction with chief ministers was in January before the vaccination roll-out. He had announced that the Centre will bear the expenses of vaccinating nearly three crore healthcare and frontline workers in the first round and suggested that public representatives, a reference to politicians, should not be part of this initial exercise. The drive has now moved on to the next round to cover people over 60 years of age, and those aged above 45 years and have comorbidities.

The Health Ministry data showed that total active caseload has increased to 2,34,406 which now comprises 2.05 per cent of the total infections, while the recovery rate has further dropped to 96.56 per cent.

Maharashtra, Punjab, Karnataka, Gujarat and Tamil Nadu continue to report a high number of daily COVID-19 cases, accounting for 71.10 per cent of the 28,903 new infections, the Union Health Ministry said on Wednesday.