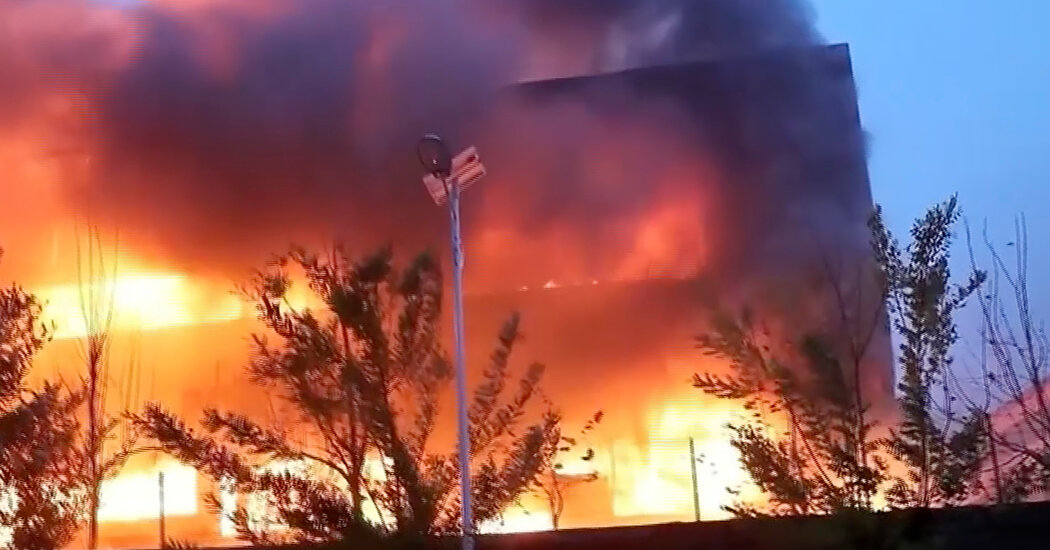 Officials say an investigation is underway into what caused the tragedy at the two-story facility operated by a wholesaler of industrial equipment, clothing and chemical products.

A fire swept through a two-story factory in central China on Monday, killing 38 people in one of the most deadly fires in the country in recent years.

According to a statement from local officials, the fire started at around 4 p.m. at Kaixinda Trading, a wholesaler that deals in a range of goods, in Anyang, a city in Henan Province known as a high-tech development zone that was once an ancient Chinese capital. Teams of rescue workers extinguished the fire by around 11 p.m., state media reported.

On Tuesday, state media attributed the cause of the fire to electrical welding that violated regulations. In a statement released on Monday, the Anyang police said they had “placed relevant suspects under control.”

A video shared by state media showed a bright-orange fire raging at the end of a street, as firefighters fastened a hose onto a fire truck and a column of smoke billowed up. State media reported on Tuesday that the fire was fueled by the burning of “plastics, cloths, furnitures and medications, among others.”

Kaixinda Trading sells, among others, clothing, furniture, chemical products and industrial equipment. It was established in 2007, according to public records.

The company did not respond to requests for comment.

In 2013, a fire in a poultry plant in Jilin province killed 120 people and stirred public outrage over workplace safety concerns. State media outlets reported at the time that doors and windows at the factory had been locked to keep workers from leaving during work hours. Similar accusations were reported after a 1993 fire at a Shenzhen doll factory that killed 81 people.

After a deadly factory blast in Jiangsu killed 69 workers and injured hundreds more in 2014, President Xi Jinping ordered an investigation and Li Keqiang, China’s premier, called for more stringent safety checks at factories across the country, according to a government statement at the time.

In recent years, China has moved to reduce factory accidents and fire regulations around fire management in dense areas have proliferated.

“Just because there are laws and regulations does not mean there are guarantees” of safety, said Jiang Dining, a fire safety expert and a member of the Chinese Fire Protection Association.

Mr. Jiang called the Henan blaze a “particularly serious fire,” a term used in his field for fires that kill more than 30 people or cause 100 million yuan, or $13 million, in damages. Monday’s fire was the first in China to claim that many lives in the past years, he said.

Amitabh Bachchan shares intriguing ‘now and then’ post, reveals what changed in 78 years