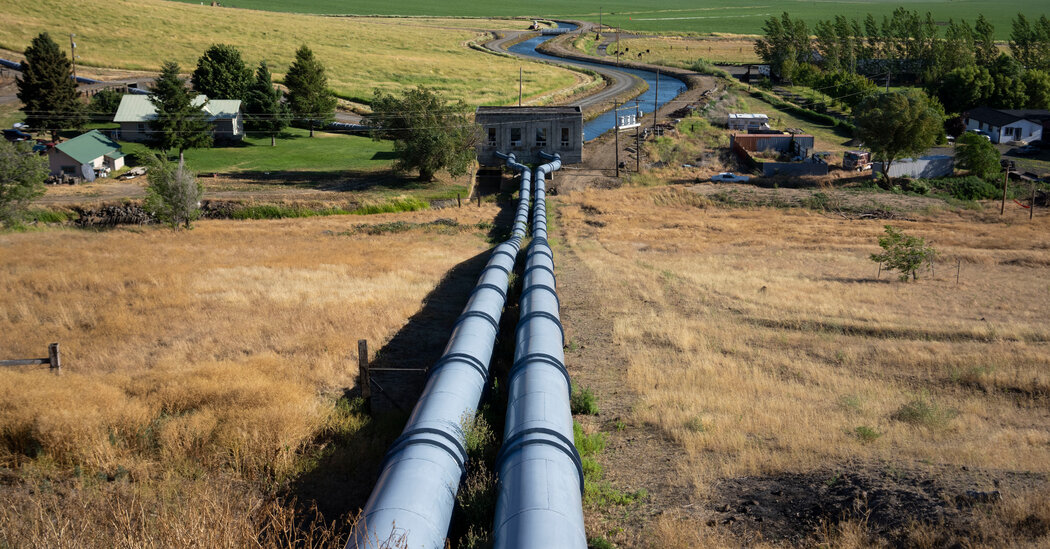 Success in the Yakima River Basin in Washington holds lessons for the seven states at war over water in the American West.

YAKIMA, Wash. — The water managers of the Yakima River basin in arid Central Washington know what it’s like to fight over water, just like their counterparts along the Colorado River are fighting now. They know what it’s like to be desperate, while drought, climate change, population growth and agriculture shrink water supplies to crisis levels.

They understand the acrimony among the seven Colorado Basin states, unable to agree on a plan for deep cuts in water use that the federal government has demanded to stave off disaster.

But a decade ago, the water managers of the Yakima Basin tried something different. Tired of spending more time in courtrooms than at conference tables, and faced with studies showing the situation would only get worse, they hashed out a plan to manage the Yakima River and its tributaries for the next 30 years to ensure a stable supply of water.

The circumstances aren’t completely parallel, but some experts on Western water point to the Yakima plan as a model for the kind of cooperative effort that needs to happen on the Colorado right now.

“It’s going to require collaboration on an unprecedented level,” said Maurice Hall, vice president for climate resilient water systems at the Environmental Defense Fund. The Yakima Basin plan, he said, “is the most complete example of what we need that I have observed.”

Representative Melanie Stansbury, a New Mexico Democrat who worked on the Yakima Basin and other water issues for years before being elected to Congress in 2021, said the plan “represents the best of a collaborative, science-based process.”

“It’s a successful model of bringing science and stakeholders to the table,” she said.

But it began out of a strong sense of desperation.

Climate change and recurring drought had wreaked havoc with the water supply for irrigation managers and farmers in the Yakima Basin, one of the most productive agricultural regions in the country. Conservationists were concerned that habitats were drying up, threatening species. Old dams built to store water had blocked the passage of fish, all but eliminating the trout and salmon that the Indigenous Yakama Nation had harvested for centuries. In droughts, water allocations to many farms were cut.

Years of court fights had left everyone dissatisfied, and a proposal in 2008 for a costly new dam and reservoir that favored some groups over others had not helped.

Ron Van Gundy, manager of the Roza Irrigation District at the southern end of the basin, went to see Phil Rigdon, director of the Yakama Nation’s natural resources division. The two had been battling for years, largely through lawyers. They both opposed the dam, but for different reasons.

“I was walking into a meeting,” Mr. Rigdon recalled in an interview. “And he said, ‘Hey Phil, can we talk?’ I started laughing and said, ‘I don’t know, can we? Our attorneys would probably freak out if we did.’”

Melting ice. In a more drastic forecast than earlier assessments, a new study found that the melting of the Greenland ice sheet could eventually raise global sea levels by at least 10 inches. The study reached the conclusion in part because it used a different measure to gauge ice loss that takes into account the warming that has already occurred.

Boosting soy crops. Researchers say that they were able to significantly increase yields in soybean crops by using genetic modifications to increase the efficiency of photosynthesis. The findings hold promise that these methods could increase the food supply as climate change and other threats make it harder for vulnerable populations across the globe to feed their families.

Forever chemicals. Scientists have found a cheap, effective way to destroy so-called forever chemicals, a group of compounds that pose a global threat to human health. The Environmental Protection Agency said it will designate the two most commonly detected chemicals, which have been linked to cancer and have been found in everything from drinking water to furniture, as hazardous substances.

The two met, and eventually other stakeholders, joined them in developing a plan for better management of the river. After several years of give-and-take, the result was the Yakima Basin Integrated Plan, a blueprint for ensuring a reliable and resilient water supply for farmers, municipalities, natural habitats and fish, even in the face of continued warming and potentially more droughts.

A decade into the plan, there are tens of millions of dollars’ worth of projects up and down the river designed to achieve those goals, including canal lining and other improvements in irrigation efficiency, increasing reservoir storage, and removing barriers to fish.

Now, hundreds of miles to the south and east, there’s a similar sense of desperation among the users of the Colorado.

With the river’s two main reservoirs at all-time lows, the federal government is asking the seven states that use the Colorado to cut consumption next year by a staggering amount, up to one-third of the river’s normal annual flow. And beyond 2023, as climate change continues to take a toll on the river, painful long-term cuts in water use will be necessary.

All the reductions will have to be negotiated among states that, more often than not have been fiercely protective of their share of the river’s water. Those shares were originally negotiated during wetter times a century ago.

The states have negotiated some important agreements over the years, including one that prescribed cuts, based on water levels at Lake Mead on the lower Colorado, that were first implemented last year. But the demand for much larger reductions has put a spotlight on perennial tensions between the upper basin states of Colorado, Utah, New Mexico and Wyoming, who collectively use less than their allotted share, and the lower basin states of California, Nevada and Arizona, who use their full allotment or more.

The states missed a mid-August deadline to negotiate next year’s cuts. The federal government has effectively given them more time, but is threatening to step in and order the reductions.

The Yakima Basin is far smaller than the Colorado, with a population of 350,000 compared with the 40 million people who rely, to varying degrees, on the Colorado’s supply. While farmland in the basin is important (among other things, it produces about 75 percent of the country’s hops that impart a tang to countless beers and ales) agricultural production along the Colorado is much larger.

The Yakima River, itself a tributary of the Columbia, is only 210 miles long, one-seventh the Colorado’s length, and lies within a single state, not seven plus Mexico. Thirty Native tribes have rights to Colorado water, compared with just the Yakama Nation.

All of that makes some water managers on the Colorado doubt that the Yakima plan could be much of a model.

“The Colorado River is orders of magnitude more complex and difficult than the Yakima,” said Jim Lochhead, chief executive of Denver Water, which supplies drinking water to the city and surrounding communities. “That makes it extremely difficult to sit down a group of stakeholders and agree on a grand solution.”

But those who are intimately familiar with the Yakima plan say the plan’s fundamental principle, of shared sacrifice and cooperation among groups that were often adversaries, can apply anywhere.

“Everyone can’t get everything what they want,” said Thomas Tebb, director of the Columbia River office of the state Department of Ecology. “But if they can get something, that’s really the basis of the plan.”

The Yakima River has a long history of overuse, dating to the early white settlers who arrived after a treaty was signed between the federal government and the Yakama Nation in 1855. The river and its tributaries were dammed and diverted, and irrigation systems were built. Water shortages quickly became an issue, especially in dry years, leading to decades of conflicts among users.

As on the Colorado, there were earlier efforts to ensure a stable supply, especially following droughts in the 1930s and 40s. After another severe drought, in 1977, state and federal officials developed a “watershed enhancement” plan to try to improve fish passage.

But it wasn’t enough. For one thing, the droughts kept coming, said Urban Eberhart, who grew up on a farm in the basin and now manages the Kittitas Reclamation District in the northern part.

“Instead of just being one of these droughts, we started getting them back-to-back and then three in a row,” he said.

In 2010, the federal Bureau of Reclamation undertook a study of the basin, looking at how it would fare as the world continued to warm. The findings added impetus to the drive to develop a plan.

“What we went through from 1977 to 2009 was nothing in comparison to where we were headed,” Mr. Eberhart said. There was a growing sense that drastic action was needed. “We won’t recognize this economy or this ecosystem if we don’t act.”

With so much information to discuss, the meetings on the plan were intense and time consuming, Mr. Eberhart said. But that had a benefit: Pressed for time, participants started taking breaks and lunches together.

“Pretty soon, over time, all of us who were very suspicious of each other would talk, and that turned into friendship, trust and respect,” he said.

Mr. Rigdon of the Yakama Nation said that now, as likely as not, a project gets widespread support, even from groups that might not see as much benefit from it. Though challenges remain, he said, “We’ve understood what the other side needs. And they’re no longer the other side.”

The fruits of those relationships can be seen throughout the basin, in projects that usually serve more than one purpose and benefit more than one group of stakeholders.

In his irrigation district, Mr. Eberhart has led successful efforts to use the canals to deliver water to long-dried-up streams, to restore fish.

There are several projects, under construction and proposed, to increase water storage to help make it through dry years. And in the city of Yakima itself, Nelson Dam, an old diversion dam on a tributary has been removed, replaced by an engineered channel that will allow passage of both fish and boats, redistribute sediment through the river system and reduce flooding, all while continuing to divert water for the city’s needs.

“It’s not doing one thing — do things that meet everybody’s criteria,” said David Brown, the city’s assistant public works director. “If you do that, everybody agrees.”

Handling Coughing Plus Cool: Methods to Safeguard Your self You