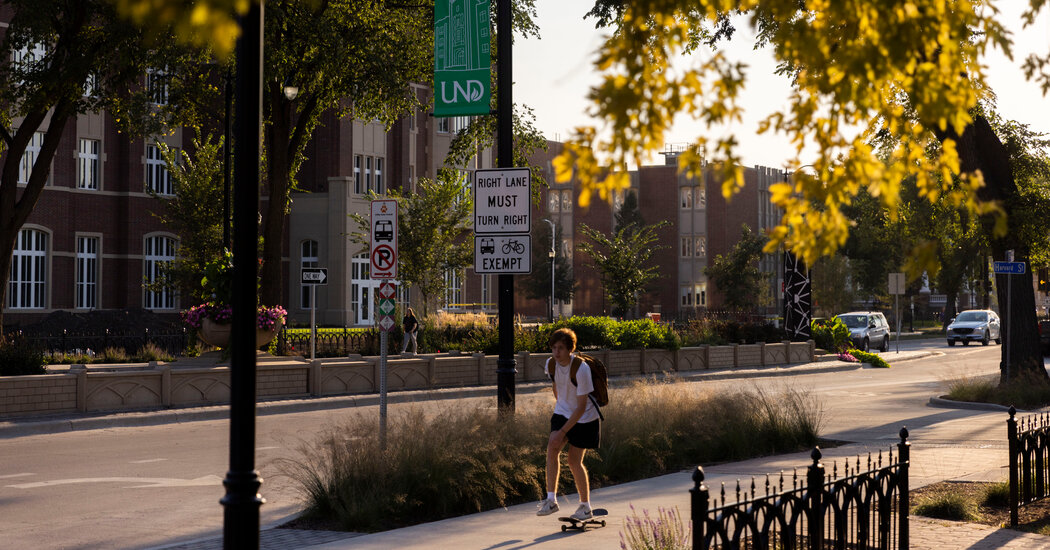 The University of North Dakota, the latest U.S. college to acknowledge keeping Indigenous bones and artifacts, pledged to work with tribal leaders on returning them.

GRAND FORKS, N.D. — The tribal leaders arrived at the University of North Dakota last month for a somber, secret task.

For three days, they scoured storage rooms, recited prayers and hauled boxes. The move required closing hallways, pausing construction projects and turning off smoke detectors so that the burning of sage or sweet grass would not trigger an alarm.

It was a first step in the long process of returning artifacts and the remains of Native American people from the university to tribes.

More than 30 years ago, Congress passed a law requiring colleges and museums to return Native remains and artifacts in their possession. But a generation later, the returns have been slow and halting, when they have happened at all. Many institutions have dragged out the process, questioning tribes’ links to artifacts and, in some cases, disputing whether items should be returned. Others, like the University of North Dakota, seem to have made no comprehensive effort to find and return items until recently, leaving questions about how so many decades passed without progress.

“There had to have been someone who opened a box, saw something, looked and then they walked away,” said Crystal Alberts, an English professor at the University of North Dakota who was present when a first box of human remains was located on campus in March.

The process is especially painful and personal on North Dakota’s campus because of the school’s demographics as well as its past. The university has a significant population of Native American students, an on-campus center for American Indians and thriving academic programs for Native students pursuing careers in medicine, psychology and nursing. But the college’s history includes a long-running dispute over a former mascot, the Fighting Sioux, that remains a common sight on campus even though many find it offensive.

“U.N.D. set the standard for desecrating and disrespecting, dishonoring Indigenous people,” said Hillary Kempenich, a graduate of the university who is a member of the Turtle Mountain Anishinaabe, and who said racism against Native Americans was a defining part of her campus experience about 20 years ago. “While they may be giving those remains back, they have a lot of responsibility to help us heal, to help us move forward.”

North Dakota is one of many colleges grappling with these issues. Through much of the 20th century, collecting Native artifacts and remains was seen by many academic institutions in this country as a legitimate pursuit, with archaeologists digging up burial sites to gather items for study and display. Harvard, the University of California, Berkeley, and the University of Alabama are among the schools that have faced criticism in recent years for their handling of returning remains and artifacts. Remains from more than 108,000 Indigenous people and more than 765,000 artifacts are known to be held by museums, universities and federal agencies, according to the National Park Service.

Late last month, campus officials in North Dakota announced that they had found the remains and artifacts this year. They promised that they would be guided by the wishes of tribal leaders as they returned what had long ago been plundered. But they are only in the beginning stages of the difficult process of determining which human remains belong to which tribes.

“The clock is ticking and we have to get moving quickly,” said Andrew Armacost, the university president, who has repeatedly apologized to Native Americans in recent days. “And we have to think about the trade-offs,” he added. “Do we wait for the set of ancestors and items to be fully identified and marked to specific sites? Or do we do it in segments?”

On the neatly landscaped campus in Grand Forks, the announcement pained Native Americans. Devon Headdress, a senior who is Hidatsa and wants to become a doctor, said he initially felt a deep anger and struggled to focus in class after he heard the news. Nerissa Dolney, who is pursuing a doctorate in psychology, described it as a “soul wound.”

“You feel it so deeply, and it’s not really a feeling you can describe to other people,” said Ms. Dolney, who is a member of the Sisseton Wahpeton Oyate, whose reservation is in South Dakota and North Dakota.

Native students and faculty spoke of reconciling anger over the university’s past wrongdoing with what most described as a good-faith effort, at least so far, to return the remains. Mr. Headdress, the president of the university’s Indian Association, said his initial frustration that Dr. Armacost waited six months to publicize the discovery subsided when the president explained that he had done so at the request of tribal leaders. Elleh Driscoll, a graduate student, said she was counting on the university to keep its promises.

“This is going to be something that we carry around probably for the rest of the time we’re at U.N.D.,” said Ms. Driscoll, who is from the Meskwaki tribe, which is based in Iowa. “It’s something that’s going to be weighing on us.”

University leaders have been vague about where the remains and artifacts were found on campus, about which faculty members might have collected and stored them, and about which tribes might have claims.

Some university officials said they believed that most or all of the human remains were from people who died before the 19th century, though Dr. Armacost, who became president in 2020, said it was too soon to know that. Some of the remains may have been used as teaching aids in classrooms.

One professor and acting president in the early days of the university, Henry Montgomery, whose photo is on display in the administrative building, was well known for excavating Native burial mounds. In 1906, he published a paper called “Remains of Prehistoric Man in the Dakotas.”

Until recent decades, Native Americans’ objections to excavations of burial sites were routinely brushed aside in favor of arguments that skeletal remains and objects had scholarly value.

That attitude slowly evolved — after focused activism from Native Americans — to prioritize the desires of tribal members, who often choose to take remains and bury them according to their own practices. The Native American Graves Protection and Repatriation Act, commonly known as NAGPRA and enacted in 1990, set criteria for Native American tribes to reclaim remains and sacred objects.

April M. Beisaw, the chair of the anthropology department at Vassar College, said she and other academics who entered the field after NAGPRA were accustomed to taking the wishes of tribes into account.

“Those in my generation don’t know a world without NAGPRA, so we accept that this is the right thing to do,” said Dr. Beisaw, who added that the slow return of remains and artifacts could be partly blamed on the attitudes of some older archaeologists who opposed the law. “They felt entitled to those collections,” she said. “They felt they had been personally attacked.”

At Harvard, which has thousands of Native American remains that are subject to NAGPRA, officials have apologized for the collection of the items and promised to return them to their proper tribes, but have moved at a slow pace.

At the University of California, Berkeley, a process to return thousands of skeletal remains and sacred objects has begun, but the university has been criticized for failing to work closely with tribe members on repatriation.

The remains on North Dakota’s campus, it seems, had long been stored out of public sight, unknown to current campus leadership and not spoken about openly. Most of the bones were not parts of complete skeletons, officials said, and some of the remains had been damaged. Many of them were believed to have been kept at the university since the early 20th century, the result of digs at grave sites by archaeologists. Such digs continued into the 1980s, the university said.

University officials said they did not know whether there were efforts to return remains and artifacts when NAGPRA took effect in the 1990s. In addition to finding remains from dozens of people, they said the university also improperly possessed headdresses, pipes and other artifacts.

The return of remains comes amid growing national recognition of other historical wrongs perpetrated against Native Americans, including residential schools where Native students were taken against their will.

“You’re shocked but you’re not shocked,” said Jamie Azure, the chairman of the Turtle Mountain Band of Chippewa Indians, who believes that some of the remains and artifacts at the University of North Dakota were taken from his tribe. “You’re almost desensitized to it, because, well, what’s next?”

Some Native Americans at the university spoke of complicated, even conflicting views of their school. Doug McDonald, a psychology professor for more than 30 years who is Oglala Lakota, described “loving this institution and at the same time recognizing that its relations with American Indian tribes and people is and has always been strained.”

Over the decades, Dr. McDonald said, he had been proud of his work training Native American psychologists. But he was continually disheartened by the dispute over the Fighting Sioux name and logo, which remains prominently displayed on car bumper stickers and the outside of the hockey arena even though it was officially retired in 2012.

About 6 percent of North Dakota residents are Native American, making them the state’s largest nonwhite racial group, and five reservations are situated at least partly within the state’s borders. University of North Dakota officials said about 3.8 percent of students identified as American Indian or Alaska Native.

Tribal relations with the state government have regularly been tense. When Native Americans gathered by the thousands in 2016 and 2017 to protest the Dakota Access Pipeline, which runs near a reservation, National Guard members and state troopers were called in. Law enforcement clashed violently with protesters, and state officials eventually ordered the protest site cleared.

Gov. Doug Burgum, a Republican who took office in the middle of the pipeline protests, has tried to improve ties. In 2019, the flags of North Dakota’s five tribal nations were put on permanent display in the State Capitol. He called the treatment of the remains and artifacts at the university “deeply insensitive” and apologized to tribes.

The process that still lies ahead for the university will, in many ways, be the hardest part. Though some of the remains and artifacts include detailed documentation, officials said, little is known about the provenance of others. Some may be more than 1,000 years old.

There will also be questions of responsibility, both for the university and for individuals, and the difficult truth that learning the full story could require talking to current or former employees who were complicit in taking or storing the remains.

Laine Lyons, a director of development in the College of Arts and Sciences and a member of the Turtle Mountain Band of Chippewa Indians, was part of the group that opened the first box of remains in March, an experience that she described as traumatic and shocking. She had been searching for artifacts stored on campus, perhaps some arrowheads, when she found those bones.

The focus now, Ms. Lyons says, is ensuring accountability from the university and seeing that the ancestors’ remains are respectfully returned to their tribes.

“There needs to be action that goes beyond just words,” she said. “It hurts to know that people who are no longer here can’t say anything.”

US to modify H1B visa selection process, to give priority to wages, skill level