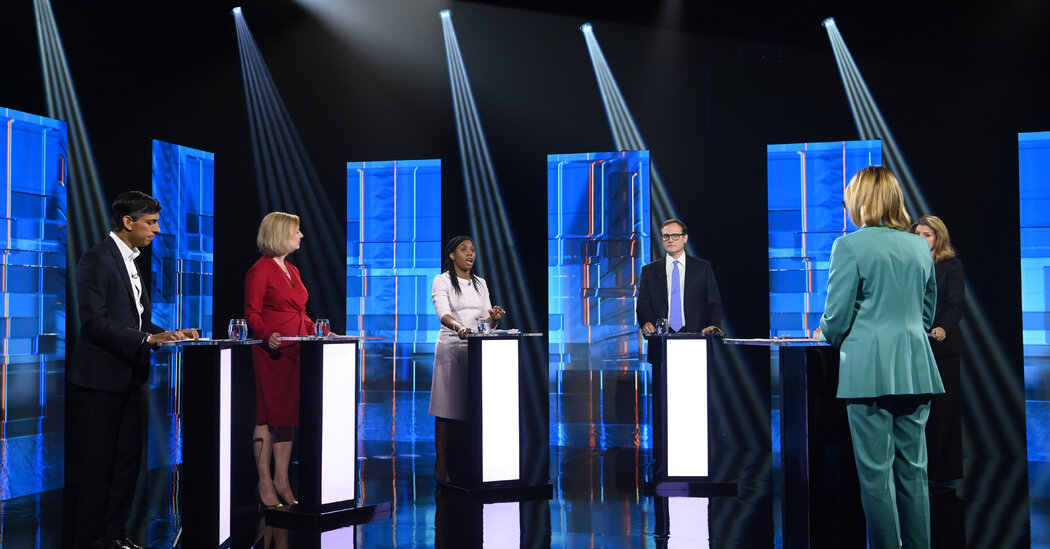 LONDON — The prospect of record-breaking temperatures in Britain might have been expected to raise the heat on leading politicians over the ambition of their climate protection plans.

Instead, with a ferocious battle underway to succeed the prime minister, Boris Johnson, top contenders are talking less about global warming and more about how to blunt the impact of spiking energy bills on hard-pressed consumers.

Scientists have found that some of the heat extremes around the world in recent years have been influenced by human-induced climate change.

But the direction of the debate has so alarmed Alok Sharma, a cabinet minister who led last year’s COP26 climate conference in Glasgow, that on Sunday in an interview with The Observer he threatened to quit if Mr. Johnson’s replacement ditches current commitments to reach net-zero carbon emissions by 2050.

The five politicians who are still in the race to succeed Mr. Johnson as leader of the Conservative Party are not proposing to do that, but in a TV debate on Sunday, the three front-runners all said they wanted to protect consumers whose rising domestic energy bills are expected to surge again this fall.

Rishi Sunak, the former chancellor of the Exchequer, warned that “if we go too hard and too fast we will lose people”; Penny Mordaunt, a middle-ranking trade minister, said that the net-zero plan “mustn’t clobber people”; and Liz Truss, the foreign secretary, said that it needed to be delivered in a way that “doesn’t harm people and businesses.” She promised a moratorium on the “green levies” added to energy bills to help finance the cost of transition.

Those positions might be explained both by Britain’s surging inflation and by the leadership contest rules, which require Conservative lawmakers to whittle down the contenders to two, with the final decision to be taken in a ballot of party members.

According to a poll commissioned by The Times of London, only 4 percent of Conservative Party members surveyed said that hitting the target of net-zero emissions by 2050 was one of their three priorities for their next leader.

Data suggests that the wider public cares much more, and that whoever wins will probably need to take that into consideration if they hope to win a general election.

But Ed Miliband, who speaks for the opposition Labour Party on climate issues, criticized the Conservative contenders, writing on Twitter that “as Britain faces its worst heat wave warning ever, it beggars belief that leadership candidates are tripping over each other to dump climate commitments,” and adding: “The Conservative Party is completely detached from reality and the British people.”

Extinction Rebellion, a climate action group, said that a number medical professionals had been released by the police after a protest that involved cracking eight panes of glass at the offices of the investment bank JPMorgan Chase in Canary Wharf, London, on Sunday.

Juliette Brown, a consultant psychiatrist who took part in the action, said in a statement, “This week may see the hottest day in recorded history in the U.K., putting my patients — with dementia and with serious mental illness — at very high risk from heat stress.” said

“It’s absolutely my professional duty to sound the alarm just as so many other health workers, scientists, activists and leaders are doing,” she added, accusing the firm of continuing to profit from fossil fuel interests and “knowingly fueling this climate crisis.”

Can Donald Trump be removed from White House before Joe Biden’s inauguration? Explained