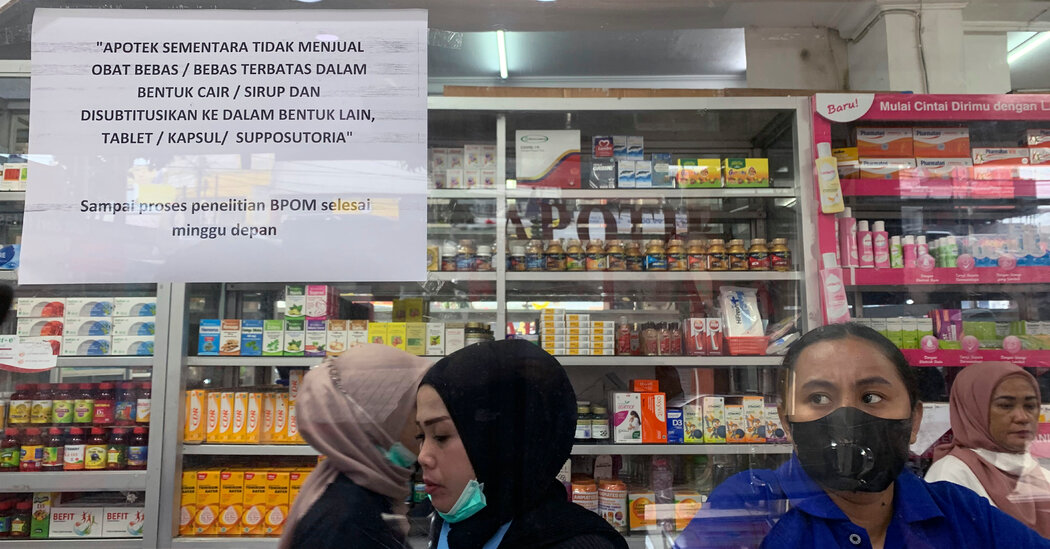 Tainted syrup from India may be connected to the deaths of dozens of children in Gambia, officials said. Indonesia banned cough syrup sales, though the link there is unclear.

Early this month, the World Health Organization’s director said that ingredients in four cold and cough syrups made in India may have been linked to acute kidney injuries and the deaths of 66 children in Gambia — and that the products may have been distributed to other countries.

Days later, the authorities in India began an investigation and halted all production by the company that made the tainted medication.

This week, the authorities in Indonesia banned the sale of all cough syrups nationwide. They are now investigating the deaths of more than 130 people, mostly children from acute kidney injuries this year. But so far, there is no proof of a connection to tainted medicine there, though contaminated cough syrups have been found in some of the children’s homes.

Here’s what we know so far:

Where did the tainted syrup come from?

The four medicines linked to the deaths in Gambia were produced by Maiden Pharmaceuticals, a company based in New Delhi that exports medicines across the developing world.

The W.H.O.’s director, Tedros Adhanom Ghebreyesus, told reporters on Oct. 5 that the agency was conducting an investigation. In a medical product alert issued the same day, the agency said that analysis of the four medicines had found “unacceptable” amounts of diethylene glycol and ethylene glycol, two industrial chemicals that are toxic to people and can cause serious injury or death in children. The next day, the health authorities in Gambia ordered a recall of the four tainted products.

The police in Gambia later said that the deaths of 69 children from acute kidney injury were linked to the four cough syrups made by Maiden Pharmaceuticals.

Last week, the authorities in India said they had suspended all manufacturing by the company after discovering violations at its factory in Haryana State, outside New Delhi. The state drug regulator said the tainted products sold in Gambia had been made at the Haryana factory in December 2021.

The Indian government formed a committee to investigate the tainted drugs and the deaths in Gambia. Vivek Goyal, the director of Maiden Pharmaceuticals, has said that the company is cooperating with investigators.

Are the Indonesia deaths related?

At this point, there is no evidence of that.

This week, the government of Indonesia banned all syrup-based medications, saying it was investigating the deaths of 133 people, mostly children, from fatal acute kidney injury. Health Minister Budi Gunadi Sadikin said on Friday that cough syrups containing diethylene glycol and ethylene glycol had been found in some of the homes where children had died.

But it was not clear how many of the deaths, if any, were connected to tainted syrup. A 2020 academic study said that while epidemiological data on acute kidney injury cases in Indonesia was limited, the condition was a common problem in intensive care units of the country’s hospitals.

Penny K. Lukito, the head of Indonesia’s food and drug agency, said on Oct. 15 that no products made by Maiden Pharmaceuticals, including the four medicines linked to the Gambia deaths, were registered in Indonesia. It is very unlikely that an imported drug could be sold legally in Indonesia without being registered.

India has said that Maiden’s tainted products were sent only to Gambia, but the W.H.O. has said that they may have been distributed to other countries.

Why are these two chemicals so harmful?

Diethylene glycol and ethylene glycol are clear, colorless and syrupy alcohols used for antifreeze and other industrial applications. Unlike the kind of alcohol that humans drink safely, they are potentially deadly even in small quantities.

The effects of ingesting them can include headache, abdominal pain, vomiting, diarrhea and inability to urinate. The chemicals can also damage the liver, kidneys and central nervous system.

The primary way that medical professionals treat people who have taken the chemicals is by giving them a drug, fomepizole, that prevents the body from metabolizing them, said Leo Schep, a toxicologist in New Zealand.

“But you’ve got to get in early” to ward off severe complications, he added. “Otherwise you’re on a slippery slope.”

Diethylene glycol has been used in the past as a cheap substitute for glycerin, a sweet syrup that is a safe ingredient in many over-the-counter drugs.

That has sometimes led to mass poisonings. At least 84 children died in Nigeria in 2009 after taking a medicine for teething pain that contained diethylene glycol.

In India, 33 children died in 1998 after taking a contaminated cough expectorant. Eight children also died that year after taking paracetemol syrup. Both of those products contained diethylene glycol.

Could something this deadly happen in the United States?

After contaminated drugs killed more than 100 people across the United States in 1937, Congress passed a law that increased the federal government’s ability to regulate drugs.

Dr. Schep said that because of that law and other regulations, the risk of another mass poisoning from contaminated medicine in the United States is low. The same is true for Australia, New Zealand and the European Union because they all have similar laws, he added.

Rs 1 crore recovered from relative of BJP leader in Telangana

Tech’s Biggest Companies Are Sending Worrying Signals About the Economy