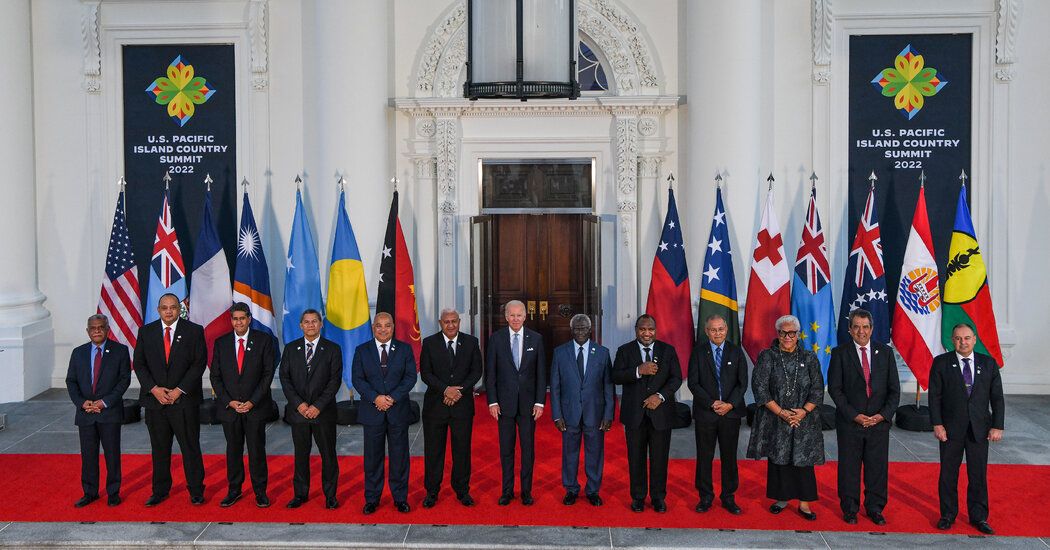 Beijing’s inroads in a strategic region are pushing the Biden administration to shore up withered ties.

SYDNEY, Australia — The United States and 14 Pacific Island nations signed a broad partnership agreement on Thursday at a summit in Washington, putting climate change, economic growth and stronger security ties at the center of an American push to counter Chinese influence in the region.

“A great deal of history of our world is going to be written in the Indo-Pacific over the coming years and decades,” President Biden said at a meeting with island leaders. “And the Pacific Islands are a critical voice in shaping the future.”

His comments — and his promise of greater funding and cooperation from the United States — reflected a realization that has only recently become more urgent in Washington: that China has made significant inroads in the island chains of the North and South Pacific, where thousands of Americans fought and died in World War II, and that America needs to catch up.

The summit this week was first announced soon after the Solomon Islands signed a security deal in April with Beijing that opened the door to Chinese training of law enforcement and a possible foothold for Chinese security forces.

That agreement may end up being a high-water mark for China, which is viewed more skeptically across the Pacific than it was just a few years ago, but the sensitivities around China’s foreign policy priorities still seemed to hover over the Washington summit.

Manasseh Sogavare, the prime minister of the Solomon Islands, initially declined to sign the partnership agreement, in what critics described as a nod to Beijing. His signature and those of the other leaders landed on the declaration only after a provision mentioning Taiwan, an island democracy that China sees as a breakaway province, was stricken from the draft.

In briefings, White House officials said that the United States was committed to dialogue with countries in the region about complicated issues. They emphasized that the summit had produced additional partnership opportunities and commitments beyond the recent promise of three new American embassies, in Tonga, the Solomon Islands and Kiribati.

The United States will invest more than $810 million in expanded programs for the Pacific Islands, on top of the more than $1.5 billion provided in the past decade, according to a White House fact sheet.

Much of the money would be for climate resilience and maritime security, including a $600 million request to Congress related to a decades-old fisheries treaty that allows the United States to catch tuna in South Pacific waters.

But the package also includes a few interesting bonbons — a $20 million grant to the Solomon Islands for tourism development, $3.5 million for digital connectivity in the country and $2.8 million for F.B.I.-led law enforcement training.

Initially set aside for three Pacific Island nations, the law enforcement aid will now be spread to six: the Federated States of Micronesia, the Marshall Islands, Palau, Papua New Guinea, Vanuatu and the Solomons.

Peace Corps volunteers will also return to Fiji, Tonga, Samoa and Vanuatu, while other countries are also being considered for the program. And the United States, according to the White House, is also engaged in bilateral negotiations with Fiji on a defense cooperation agreement, and will soon begin talks with Papua New Guinea.

Leaders from the region seemed mostly pleased with the summit. China’s leader, Xi Jinping, has been providing red carpet welcomes to Pacific leaders for nearly a decade. The Biden charm offensive seemed to be more casual.

Regional analysts said the American assistance, spread across so many countries, would be far from transformative.

“The dilemma, as always, is how do you get private U.S. companies to invest more in the Pacific,” said Graeme Smith, a Pacific Islands expert at the Australian National University. “You can turn the military tap on and, with congressional approval, the aid tap, but unlike China, they can’t push their companies to engage with the region.”

Anna Powles, a senior lecturer in security studies at Massey University in New Zealand, noted that the announcements of the initiatives were a bit thin on administrative details.

One of the main complaints about American diplomacy in the Pacific is that it is too bogged down by bureaucratic requirements and too under-resourced in terms of personnel, making the United States a red-taped tortoise to China’s speedy hare. For many people in the islands, it will take more than fact sheets and summits to change that perception.

Turkey plans to complete inoculation in May or June: President Recep Tayyip Erdogan