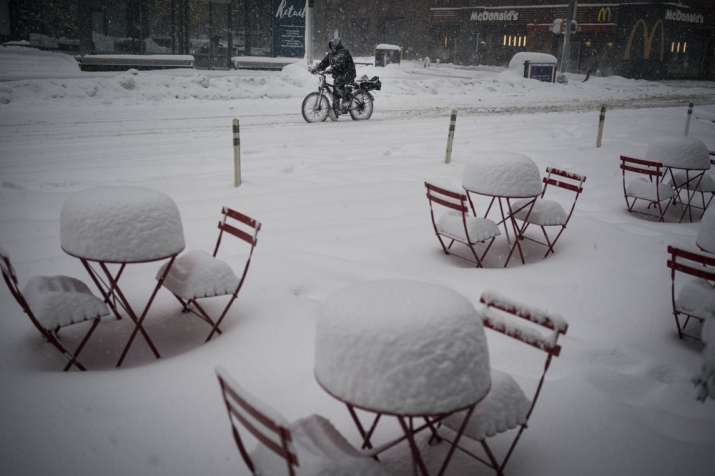 A sprawling, lumbering winter storm walloped the eastern U.S. on Monday, shutting down coronavirus vaccination sites, closing schools, and halting transit as snow piled up from the Appalachians to New England, with the heaviest accumulations yet to come in some places.

With flakes falling since Sunday evening, the National Weather Service said more than 13 inches (33 centimeters) of snow had fallen in Manhattan’s Central Park as of 1 p.m., and as much as 16 inches (41 centimeters) was reported in northern New Jersey. Although the heaviest parts of the storm had moved through the metropolitan area by Monday evening, lighter snow showers were expected to continue virtually all day Tuesday, forecaster James Tomasini said.

Parts of New England also braced for a foot (31 centimeters) or more by the time the snow finally tapers off in the northernmost states by Wednesday evening, the weather service said. At least three deaths that appeared to be related to the storm were reported, in Pennsylvania.

In Pennsylvania, authorities said a 67-year-old woman with Alzheimer’s disease who reportedly wandered away from her home was found dead of hypothermia on an Allentown street Monday morning. About 60 miles (97 kilometers) north in Plains Township, a shooting after an argument over snow removal killed a married couple, and the suspect was later found dead at his nearby home of a wound believed to have been self-inflicted, officials in Luzerne County said.

A preliminary investigation indicates the people involved had a long-running conflict, but “this morning, the dispute was exacerbated by a disagreement over snow disposal,” District Attorney Stefanie Salavantis said.

In Virginia, four firefighters were taken to hospitals with injuries that were not life-threatening after their firetruck overturned Sunday on snow-covered roads in Henrico County, The Richmond Times-Dispatch reported.

Across the Northeast, many coronavirus vaccination sites closed Monday.

Connecticut Gov. Ned Lamont said the storm forced the postponement of about 10,000 shots and delayed the state’s weekly resupply of vaccine, now expected Tuesday. He urged providers that called off vaccination appointments to extend their hours if needed to reschedule the shots by the end of the week.

READ more...  IND vs ENG | Final three T20Is in Ahmedabad to be played behind closed doors

The storm disrupted the second phase of Massachusetts’ vaccine rollout as a Boston site that was supposed to open Monday for residents ages 75 and over did not; some other mass vaccination sites were open. The state was expected to get 12 to 18 inches (31 to 61 centimeters) of heavy, wet snow and wind gusts of up to 55 mph (88 km/h) along the coast, according to Gov. Charlie Baker.

“We’re used to dealing with snow this time of year, but it’s important for folks to take this one seriously due to the heavy snowfall, the high winds, and the speed with which this snow is going to fall when it starts to come down,” Baker said at a press conference.

In a school year when many students are already learning from home, in-person classes were canceled in many places.

“I’d like to think there is still some virtual learning going on, with a little bit of time for sledding along the way,” Lamont quipped.

READ more...  'Didi is winning Nandigram, no question of her contesting from another seat': TMC

New York City mom Alyssa Burnham was happy for her son to have “a break from his regular routine.” Now that snow days have blurred into remote-learning days, “it’s fun for him to just get out here and be a kid,” she said as he played in the snow.

The New York City area had scattered power outages by early evening, affecting about 3,200 homes and businesses in the city and its New York suburbs, 4,000 in New Jersey, and 1,200 in Connecticut.

Hundreds of flights and many trains and were canceled, and aboveground New York City subway service stopped at 2 p.m.

In recent days, a storm system blanketed parts of the Midwest, with some areas getting the most snow in several years. Ohio and Washington, D.C., also got snow.

The snow and cold in Washington led President Joe Biden to postpone a visit to the State Department that had been planned for Monday. White House press secretary Jen Psaki said the administration had been in contact with governors states affected by the weather.

ALSO READ | It’s snowing in Shimla: These pics will leave you spellbound