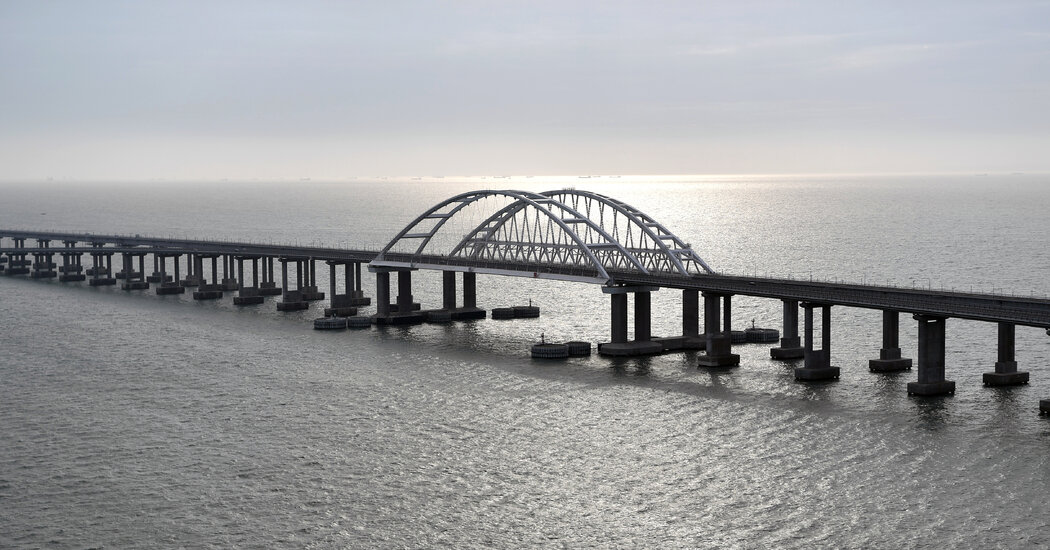 The 12-mile Kerch Strait Bridge linking the Crimean Peninsula to the Russian mainland, which was badly damaged by an explosion on Saturday, is not just the primary supply route for Moscow’s forces fighting in southern Ukraine. It is also deeply symbolic for President Vladimir V. Putin of Russia, a pillar of his disputed claim to the Crimean Peninsula since the completion of the twin road spans in 2018.

Mr. Putin presided over the bridge’s opening, personally driving a truck across what is a physical link between Russia and Crimea — land that Mr. Putin seized from Ukraine in 2014 and annexed to international outcry.

Ukrainians loathe the bridge, whose symbolism and strategic importance for resupply has long made it a potential target. Over the summer, the Ukrainian military posted a taunting image on Twitter threatening to strike it with American-provided guided rockets. The video showed the launch vehicle, a High Mobility Artillery Rocket system, floating on a pink inflatable pool raft in the strait, and the bridge in the background.

And at one point over the summer, it appeared to have been targeted: Russian officials said that a drone had triggered air defense systems. The Ukrainian government had no official comment at the time.

The damage to the bridge could sever the single overland route to bring supplies from Russia to its bases in Crimea.

Moscow had stepped up countermeasures to defend the structure, deploying a target ship — replete with an array of radar reflectors — to protect the bridge from attack and running drills to cover the bridge with a smoke screen.

As well as military value, the structure holds deep symbolic significance for the Kremlin. After illegally annexing Crimea in 2014, Moscow vowed to physically connect the peninsula to Russia.

For a century, talks of building a bridge across the strait — which runs between two mountain ranges, creating a fierce wind tunnel — had failed to result in action. But Mr. Putin put his weight behind the project, despite that and other engineering challenges, which include a seabed covered with some 250 feet of fine silt deposited by the alluvial flow from various rivers.

During World War II, an ice floe unleashed during the spring thaw toppled a German military bridge that been hastily constructed across the waters to aid the Nazi war effort.

In 2018, when the new bridge was opened, Mr. Putin hailed it a “remarkable” achievement that, he said, referring to a major city on the peninsula, “makes Crimea and legendary Sevastopol even stronger, and all of us are even closer to each other.”

But after explosions at the Saki airfield on Crimea in August, the bridge served a different purpose: It was a quick escape route as the war came to the peninsula, with more than 38,000 cars crossing in one day, the most recorded since Mr. Putin declared it open.