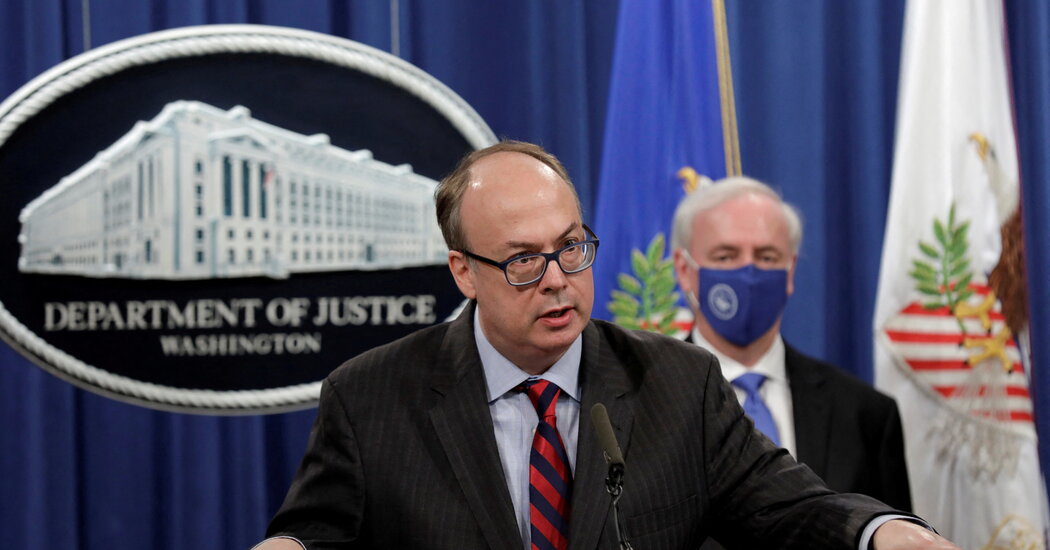 A D.C. Bar office filed a complaint against Jeffrey Clark, the former Justice Department official who worked to undo the results of the 2020 election.

WASHINGTON — A disciplinary board is moving to penalize Jeffrey Clark, the former Justice Department official who worked to undo the results of the 2020 election, including the possibility of disbarment.

A complaint filed this week by the D.C. Bar’s Office of Disciplinary Counsel, which governs lawyers in Washington, accused Mr. Clark of interfering in the administration of justice in his bid to keep President Donald J. Trump in power.

The ethics complaint comes as the Justice Department’s watchdog and federal prosecutors are also scrutinizing Mr. Clark for his efforts to wield the department’s authority to falsely persuade election officials and the American public that Mr. Trump had won the presidential race.

Once Mr. Clark receives the complaint, he has 20 days to respond to the accusations, according to a filing by the D.C. Bar. Mr. Clark and his lawyers can present evidence in his defense and cross-examine witnesses. Should he lose his case, the board could ultimately strip him of his law license.

Numerous inquiries. Since Donald J. Trump left office, the former president has been facing civil and criminal investigations across the country into his business dealings and political activities. Here is a look at the notable inquiries:

Jan. 6 inquiries. A House select committee and federal prosecutors are investigating the Jan. 6 assault on the Capitol and examining the possible culpability of a broad range of figures — including Mr. Trump and his allies — involved in efforts to overturn the 2020 election. In a series of public hearings, the committee appears to be laying out evidence that could allow prosecutors to indict Mr. Trump.

Georgia criminal inquiry. Mr. Trump himself is under scrutiny in Georgia, where the district attorney of Fulton County has been investigating whether he and others criminally interfered with the 2020 election results in the state. Several allies of the former president, including Rudolph W. Giuliani, have been subpoenaed. Prosecutors have informed some state officials and Trump supporters that they could face charges.

Manhattan criminal case. The Manhattan district attorney’s office has been investigating whether Mr. Trump or his family business, the Trump Organization, intentionally submitted false property values to potential lenders. But new signs have emerged that the inquiry may be losing steam.

New York State civil inquiry. The New York attorney general’s office has been assisting with the Manhattan district attorney’s investigation while conducting its own civil inquiry into some of the same conduct. The civil inquiry is focused on whether Mr. Trump’s statements about the value of his assets were part of a pattern of fraud or were simply Trumpian showmanship.

Trump’s social media merger. A federal grand jury in Manhattan has issued subpoenas regarding the merger of Mr. Trump’s social media company, Truth Social, with Digital World Acquisition, a special purpose acquisition company, or SPAC. Federal authorities are also investigating a surge in trading that preceded the announcement of the $300 million deal.

Westchester County criminal investigation. The district attorney’s office in Westchester County, N.Y., appears to be focused at least in part on whether the Trump Organization misled local officials about the value of a golf course, Trump National Golf Club Westchester, to reduce its taxes.

Mr. Clark did not respond to a request for comment.

Rachel Semmel, a spokeswoman for the Center for Renewing America, where Mr. Clark is a senior fellow, called Mr. Clark “an American hero” and said that the ethics complaint was “the latest attack on the legal qualifications of one of the only lawyers at the Department of Justice who had the interests of the American people at heart.”

The complaint was earlier reported by Law & Crime.

Mr. Clark largely flew under the radar at the Justice Department. In 2018, he was confirmed to run the environmental and natural resources division, and he took on the additional role of acting chief of the civil division after its leader resigned in the summer of 2020.

But he drew national attention after The New York Times reported that he had been part of an attempt to overthrow the Justice Department’s leadership in order to wield the agency’s power to keep Mr. Trump in office.

The complaint focuses on that effort, which included John Eastman, a lawyer close to Mr. Trump; Kenneth Klukowski, a White House official who began working with Mr. Clark at the Justice Department after the election; and Representative Scott Perry, Republican of Pennsylvania, who was one of Mr. Trump’s top allies in Congress.

Nevertheless, the complaint says that on Dec. 28, Mr. Clark asked Mr. Klukowski to research whether state legislatures could submit unauthorized slates of electors to Congress.

Mr. Clark reportedly used that research to draft a “proof-of-concept letter” to Georgia state election officials, falsely stating that fraud affected the state’s election results. The letter urged the state legislature to convene a special session and reconsider the slate of electors who had cast their ballots for Joseph R. Biden Jr.

Mr. Rosen and Mr. Donoghue refused Mr. Clark’s entreaties to sign and send the letter. Within a week, Mr. Clark informed them that the president planned to install him as acting attorney general, a plan that top Justice Department officials and White House lawyers ultimately derailed.

Last month, federal investigators carried out an early-morning search of Mr. Clark’s Virginia home in connection with the inspector general’s investigation into efforts by former Justice Department officials to overturn the 2020 election.

Federal prosecutors in Washington are also digging into the broader plan by Mr. Trump’s allies to have key swing states submit to Congress slates of electors falsely stating that Mr. Trump had won.

Kajol: 2021 will bring us nothing if we stay underconfident