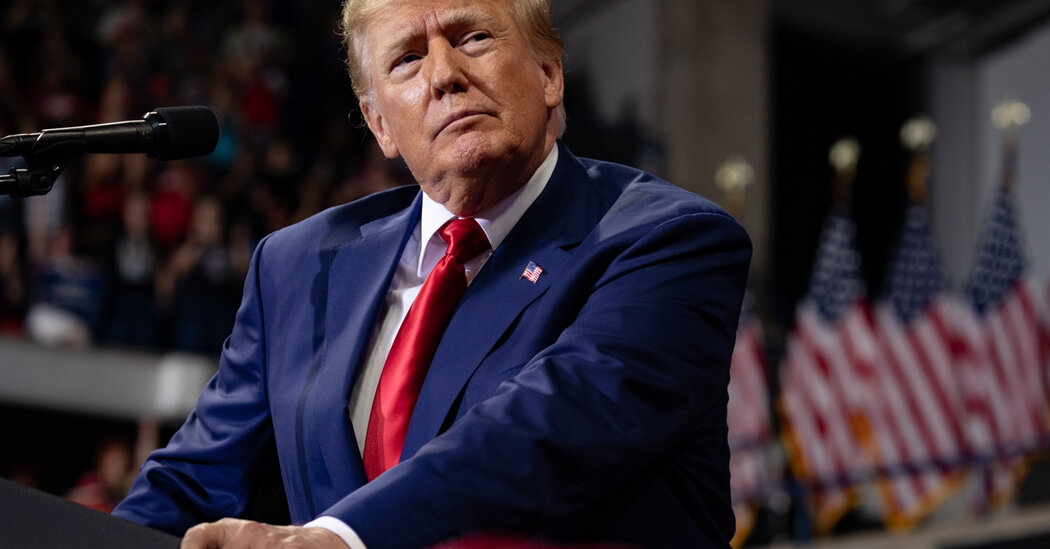 The company seeking to acquire the social media site needs shareholder approval to extend the time to complete the deal. The results of the vote are to be announced on Tuesday.

The cash-rich company that seeks to merge with former President Donald J. Trump’s social media company is facing a looming deadline and is asking shareholders to give it more time to complete the deal.

Digital World Acquisition Corporation, a so-called special purpose acquisition company, or SPAC, has given shareholders until Tuesday to decide whether to give it another year to complete the merger with Trump Media & Technology Group.

Digital World, which went public a year ago, had originally given itself until Sept. 8 to complete a merger with a company or return the hundreds of millions raised in its initial public offering to investors. Dual investigations by federal prosecutors and securities regulators into the deal have bogged down the merger and led to the delay.

The outcome of shareholder vote is expected to be announced at a special meeting on Tuesday. If Digital World does not get at least 65 percent of shareholders to approve the extension, the company has the option of adjourning the meeting to allow it more time to gather additional “yes” votes.

If Digital World’s shareholders do not approve the one-year extension, the SPAC will be forced to liquidate and return to investors the roughly $300 million it raised last September. A liquidation would leave Trump Media and its upstart social media platform, Truth Social, searching for a new business partner.

Numerous inquiries. Since former President Donald J. Trump left office, he has been facing several civil and criminal investigations into his business dealings and political activities. Here is a look at some notable cases:

Classified documents inquiry. The F.B.I. searched Mr. Trump’s Florida home as part of the Justice Department’s investigation into his handling of classified materials. The inquiry is focused on documents that Mr. Trump had brought with him to Mar-a-Lago, his private club and residence, when he left the White House.

Jan. 6 investigations. In a series of public hearings, the House select committee investigating the Jan. 6 attack laid out a comprehensive narrative of Mr. Trump’s efforts to overturn the 2020 election. This evidence could allow federal prosecutors, who are conducting a parallel criminal investigation, to indict Mr. Trump.

Georgia election interference case. Fani T. Willis, the Atlanta-area district attorney, has been leading a wide-ranging criminal investigation into the efforts of Mr. Trump and his allies to overturn his 2020 election loss in Georgia. This case could pose the most immediate legal peril for the former president and his associates.

New York State civil inquiry. Letitia James, the New York attorney general, has been conducting a civil investigation into Mr. Trump and his family business. The case is focused on whether Mr. Trump’s statements about the value of his assets were part of a pattern of fraud or were simply Trumpian showmanship.

Manhattan criminal case. Alvin L. Bragg, the Manhattan district attorney, has been investigating whether Mr. Trump or his family business intentionally submitted false property values to potential lenders. But the inquiry faded from view after signs emerged suggesting that Mr. Trump was unlikely to be indicted.

Over the weekend, Mr. Trump, in a post on Truth Social, suggested that he’d be all right if the deal with Digital World failed: “I don’t need financing, ‘I’m really rich!’ Private company anyone???”

In the run-up to the special meeting, Digital World embarked on an aggressive campaign to get out the votes, with a special appeal to the many retail investors who bought shares after the I.P.O. to show support for the former president.

Patrick Orlando, chief executive officer of Digital World and the SPAC’s primary promoter, gave a number of interviews on various social media platforms — including Truth Social — urging the many retail investors to vote. In one appearance, a Christian musician began by invoking a prayer to bless Mr. Orlando in his quest to get the extension approved.

Mr. Orlando has posted often on Truth Social, sometimes wearing a “Truth” baseball cap, telling investors how to cast a vote for the extension. Mr. Orlando did not respond to requests for comment.

Trump Media started Truth Social as an alternative to Twitter after Twitter banned Mr. Trump in the wake of the Jan. 6, 2021, attack on the Capitol by thousands of his supporters.

Digital World can adjourn the meeting for a few days to gather the votes. But if the sponsors of the SPAC want to unilaterally extend the deadline by three months or more, they will have to deposit several million dollars into the special bank account that holds the money raised in the I.P.O., according to a regulatory filing.

Even with a one-year extension, many hurdles remain for any deal between Trump Media and Digital World.

The biggest is the ongoing investigations by the Securities and Exchange Commission and federal prosecutors into potentially improper communications between representatives of Digital World and Trump Media before Digital World’s I.PO., and the unusual trading in Digital World securities before the merger announcement last October.

Read More on the Trump Investigations

Key developments in the inquiries into the former president and his allies.

Also, there is no guarantee the three dozen hedge funds that committed last year to provide $1 billion in financing if the deal closes will agree to a similar extension.

Without the cash infusion from Digital World, Trump Media may need to raise additional financing.

To date, Trump Media has raised about $37 million in financing from unnamed investors, including $15 million this year. But it is unclear how much money Trump Media has been spending to operate Truth Social since it started in February.

Its future growth could be hampered by Google’s decision not to distribute Truth Social on its app store until Trump Media removes content that incites violence.

IND vs ENG | Final three T20Is in Ahmedabad to be played behind closed...