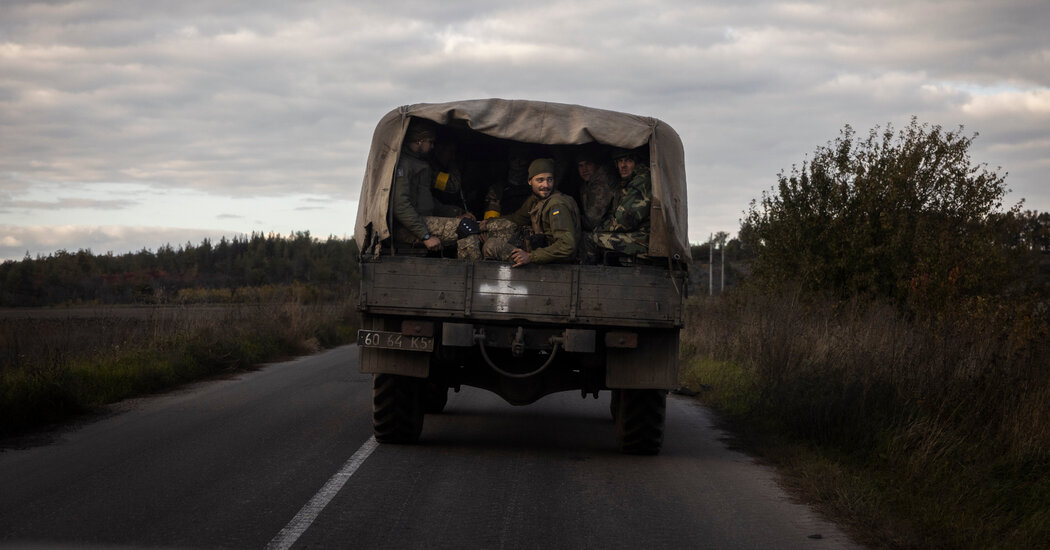 “They use their expensive rockets for nothing, just to frighten people,” a member of Ukraine’s Parliament said of Russian attacks on the country’s cities and infrastructure.

KYIV, Ukraine — They exploded with dull thuds on the outskirts of towns and detonated in the center of cities with deafening booms. Strikes in Kyiv, Ukraine’s capital, left cars burning and splatters of blood on the sidewalks.

Throughout this week, the Russian military fired its most intensive barrage of missiles at Ukraine since the start of the war in February, killing three dozen civilians, knocking out electricity and overwhelming air defenses. One thing the missiles did not do was change the course of the ground war.

Fought mostly in trenches, with the most intense combat now in an area of rolling hills and pine forests in the east and on the open plains in the south, these battles are where control of territory is decided — and where Russia’s military continued to lose ground, despite its missile strikes.

“They use their expensive rockets for nothing, just to frighten people,” Volodymyr Ariev, a member of Ukraine’s Parliament, said of the Russian cruise missiles, rockets and self-destructing drones used in the strikes. “They think they can scare Ukrainians. But the goal they achieved is only making us angrier.”

The war in the country’s south and east continued apace through the strikes, with Russia mostly falling back, though it was attacking along one section of the front in the Donbas region in eastern Ukraine.

President Vladimir V. Putin of Russia moved on Friday to reassure his country that it was making progress getting fresh troops to the front, saying that 16,000 draftees had recently been deployed “in units that get involved in fulfilling combat tasks.” He made the remarks as pro-war bloggers intensified their criticism over the reported deaths of new recruits fighting in Ukraine.

Still, during the most intensive days of Russian missile strikes — on Monday and Tuesday — the Ukrainian army continued its offensive in the Kherson region, reclaiming five villages over the two days, according to the military command. The Ukrainian army also liberated a village in the east amid the strikes.

“The Kremlin continues to struggle to message itself out of the reality of mobilization and military failures,” the Institute for the Study of War, a research group, wrote in an analysis published Thursday. “The Kremlin continued its general pattern of temporarily appeasing the nationalist communities by conducting retaliatory missile strikes.”

The war is now separated into two largely unconnected arenas: The battles in the sky, in which Russia seeks to demoralize Ukrainians and cripple their economy with cruise missiles and drones by destroying heating, electricity and water infrastructure as winter sets in, and the battles on the ground, in which Ukraine continues to advance against Russian forces in two areas of the front line.

Russia has even been using the newest addition to its arsenal, Shahed-136 kamikaze drones purchased from Iran, principally for the strategic strikes far from the front line, not in efforts to slow the Ukrainian attacks.

The drones that get past Ukrainian air defenses buzz into cities and explode, blowing up electrical power stations and municipal boilers used to heat neighborhoods.

The Ukrainian General Staff said in its morning report on Friday that in the previous 24 hours, the Russian army and air force had attacked sites around the country with missiles, rockets and self-destructing drones, from the region around Kyiv to Mykolaiv in the south, near the Black Sea.

“The enemy is not halting strikes on critical infrastructure and civilian objects,” it said, listing 88 strikes.

The strikes have refocused Ukrainians’ attention on the war in cities where a sense of normalcy had been returning, including Kyiv.

But even successful advances for the Ukrainian army have been bloody and costly, as the Russian military has been skirmishing and firing artillery to cover its retreat and its continuing attacks in the Donbas. Fighting raged along the entire front and in cross-border skirmishes in northern Ukraine overnight Thursday to Friday, the military command said in a morning statement.

The military reported mortar and artillery fire from inside Russia hitting near four towns in the Sumy and Chernihiv regions in northern Ukraine, in a slowly escalating fight along the border that has gone mostly unnoticed amid the missile strikes.

Across the border in Russia, the governor of the Belgorod region wrote on the messaging app Telegram that an ammunition depot had exploded on Friday after being hit by Ukrainian artillery. Residents told Russian news media that the blasts could be heard in the city of Belgorod, and local news media reported that a sugar mill in the area was burning.

Following their policy of ambiguity about cross-border strikes, Ukrainian officials made no claims of responsibility for the ammunition depot explosion.

Officials have hinted at a Ukrainian hand in past attacks inside Russia — for example, posting “no smoking” signs on Twitter in a running joke about the supposed, improbable cause of such explosions. Ukrainian strikes and sabotage have hit military targets and energy and transportation infrastructure in southern Russia.

In the eastern Donbas region, the Ukrainian military on Friday reported intense artillery and tank battles raging along the eastern rim of the city of Bakhmut, one of the few areas where the Russians are still consistently attacking and the Ukrainians defending.

But seesaw fighting is common even in the east and south, where the broader trend has been Ukrainian advances. On the heights around the city of Sloviansk in eastern Ukraine, Ukrainian soldiers were still guarding lines of trenches and machine gun positions Friday, but said it had been weeks since they had needed to take cover from artillery fire. The Russians there have pulled back about 30 miles.

Strikes on Russian supply routes and storage depots had hampered them badly, said a Ukrainian commander, who used only his code name, Artur, according to military protocol.

“They are running out of ammunition,” Artur said. In fighting in the spring, he said, Russian troops had fired 50 artillery rounds for every one the Ukrainians fired. “And now it’s the opposite.”

The Ukrainian military in its report on the battlefield on Friday also highlighted what it believed to be Russian manpower shortages, as well as deployments of newly mobilized recruits and mercenaries into the war zone.

It said Russia had moved about 400 foreign mercenaries from unspecified third countries to the Crimean Peninsula, with plans to send them to frontline positions. The assertion could not be independently verified.

Worry has mounted in recent days in Ukraine that Russia will respond to losses in the east and south with missile strikes on cities and infrastructure and a significant incursion into northern Ukraine.

Hints from the authorities in Belarus, Ukraine’s northern neighbor, that the country could enter the war have emerged daily, possibly to force Ukraine to divert soldiers to the north from its offensives in the east or south.

On Thursday, for example, the Belarusian foreign minister, Vladimir Makey, said the country had declared the start of a counterterrorist operation to counter supposed threats from “a neighboring country.” The declaration suggested heightened military readiness, which Ukrainians interpreted as yet another threat.

What to Cook Right Now

Caught on camera: Elderly woman dies after her own son slaps her

WHO chief points to decreasing trend in COVID-19 cases, says pandemic can be controlled