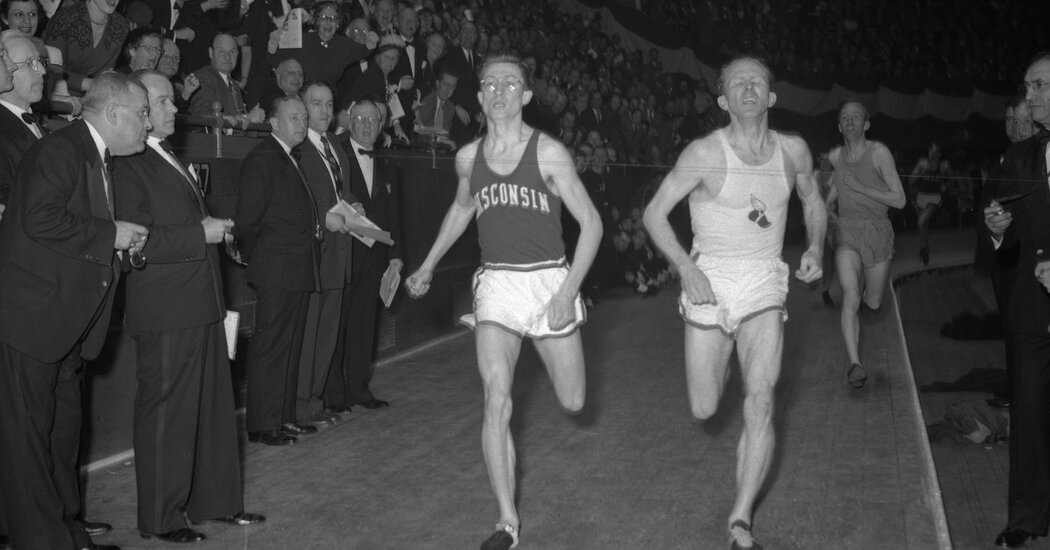 After a dead-heat finish in the 1950 Wanamaker Mile in New York and a series of yes-no-yes rulings, he was finally declared the winner almost a year later.

Don Gehrmann, a celebrated American runner who won a major one-mile race — the 1950 Wanamaker Mile — that took almost 11 months to decide, died on July 23 in a nursing home in Madison, Wis. He was 94.

His son Jim on Wednesday confirmed the death, which was not widely reported at the time.

In a college career at the University of Wisconsin from 1946 to 1950, Gehrmann won 87 of 99 races from a half-mile to two miles. From 1948 to 1951, he won 39 consecutive major mile races indoors and outdoors. His winning streak included four victories (1949-52) in the Wanamaker Mile in the Millrose Games, then held in Madison Square Garden.

In the 1950 Wanamaker Mile, on Jan. 28, Gehrmann seemed to catch Fred Wilt at the tape, or did he? Both first-place judges said Wilt had won. Both second-place judges said Wilt had finished second. The finish-line picture from the phototimer was inadvertently blocked by a judge. And so it was left to the chief judge, Asa Bushnell, who was at the finish line, to make the call. He declared Gehrmann the winner, with a time of 4 minutes, 9.3. seconds.

But that did not settle the matter. Wilt, an F.B.I. agent when not competing and a future inductee of the National Track & Field Hall of Fame, protested, and 13 days later the Metropolitan Amateur Athletic Union’s registration committee, reversing Bushnell, declared him the winner.

Then Gehrmann protested that decision, and the matter carried over almost a year later to the A.A.U.’s national convention in Washington. By a vote of 314 to 108 — 314 days after the race — that ruling body’s board of governors upheld the chief judge’s decision and declared Gehrmann, forevermore, the victor.

Some were skeptical. As Howard Schmertz, the Millrose Games’ assistant meet director in 1950, told The New York Times in 2011, “The final decision was made by maybe a dozen people who saw the race and a few hundred who didn’t.”

At 5-foot-10 and 134 pounds, Gehrmann, recognizable by his eyeglasses, won three N.C.A.A. mile or 1,500-meter championships outdoors and two A.A.U. 1,000-yard titles indoors. He won a record 12 Big Ten titles in indoor track, outdoor track and cross-country and in 1950 was voted the Big Ten’s best runner in its first 50 years.

In the 1948 Olympics in London, at age 20, he was the only non-European to reach the 1,500-meter final. He finished somewhere between seventh and 10th (the record books disagree).

In 1952, less than an hour after he had broken the world 1,000-yard outdoor record in London, Gehrmann was sitting in the stands and watching the rest of the meet. He had just downed hot dogs and a soda when the only American in the quarter-mile decided that he could not run because of an injury. Gehrmann rushed to the track, ran the race and beat the best English runners, winning in 47.9 seconds.

As he told the website Gary Cohen Running in 2011, “That may have been my greatest accomplishment.” It was one of his last in the sport because, in that era before there was professional track, he retired from running later that year to earn a living.

After earning a bachelor’s degree in education and a master’s in educational psychology, Gehrmann worked in public relations and later taught at a high school in Wauwatosa, Wis., a suburb of Milwaukee, and coached its track and cross country teams. He was a school administrator, educational consultant and a highway safety coordinator for the Wisconsin state government before retiring in 1985.

Donald Arthur Gehrmann was born on Nov. 16, 1927, in Milwaukee to Frank and Mamie (Stremke) Gehrmann. He grew up on the south side of town and attended Pulaski High School, where he learned to run indoors on his high school’s slippery gymnasium floor, and where he met Dolores Marine, known as Lori, whom he married in 1950. She died in 2016.

Gehrmann’s fastest mile was 4:7.5 seconds, pedestrian for leading runners now, but he said he never ran for time, just to win. (In 1954, Roger Bannister of England became the first to run the mile in under four minutes.)

In a 1976 interview with United Press International, Gehrmann described how the sport, by then having gone professional, had changed. He recalled that for his workouts he had usually run just 2 ¼ miles, that his pre-meet meal had usually consisted of a hamburger, French fries and soda pop, and that the cinder tracks he had run on stole a lot of energy.

“The big differences between milers now and yesterday is mental, not physical,” he said. “We didn’t train real hard in those days, but we didn’t have to. We could win without it.

“I wonder sometimes how I would have done running today, all things being equal,” he added, recalling his amateur status. “I would probably be a millionaire.”

NIA raids in Terror funding case in Srinagar and Delhi