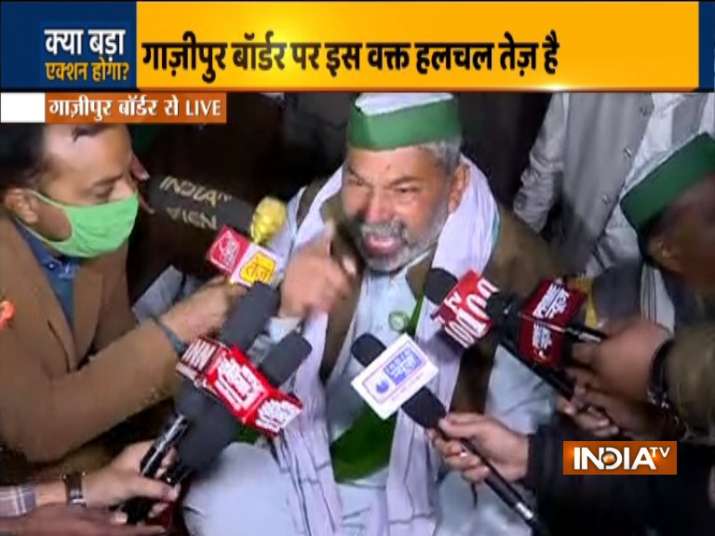 Tension prevails at Delhi-Ghaziabad border near Ghazipur as the distriction administration is reportedly preparing to evict hundreds of farmers camping at the site for over two months. Ghaziabad administration has asked protestors to vacate the UP Gate by Thursday night or else force will be used to remove them, news agency PTI reported quoting official sources.

“A notice has been served to them (farmers) under Section 133 of CrPC (conditional order for removal of nuisance),” Ghaziabad ADM City Shailendra Kumar Singh said at Ghazipur border.

Despite the administration’s orders to vacate the  protest site, farmers refused to budge with Bhartiya Kisan Union spokesperson Rakesh Tikait declaring that he was ready to face any consequences.

Addressing the crowd, Rakesh Tikait, who has been named in one of the FIRs filed in connection with Republic Day violence during tractor rally, said he wanted to surrender peacefully but warned of violence if the administration uses force.

Tikait even threatened to hang himself if he is removed forcefully. “There is a conspiracy to create trouble here. Our protest will continue, I am not surrendering. I will face the bullet. The police will open fire here if I am arrested,” Rakesh Tikait announced from the stage in the presence of top police officials of Ghaziabad district. He later broke down talking to reporters but insisted that the protest won’t end.

A heavy police deployment was made at Ghazipur border after the UP government’s ultimatum to farmer unions to vacate the protest sites across the state.

The agitation at the Ghazipur border against the three farm laws is being led by Bhartiya Kisan Union spokesperson Rakesh Tikait, who has been named in the FIR by the Delhi Police in connection with the Republic Day violence. Nearly 37 farmer leaders, including Tikait, Yogendra Yadav and others were named in the FIR. So far 25 FIRs have been filed over the January 26 incident.

The action against the farmer leaders came as Delhi Police Commissioner SN Shrivastava alleged that several of them made inflammatory speeches and were involved in the violence.