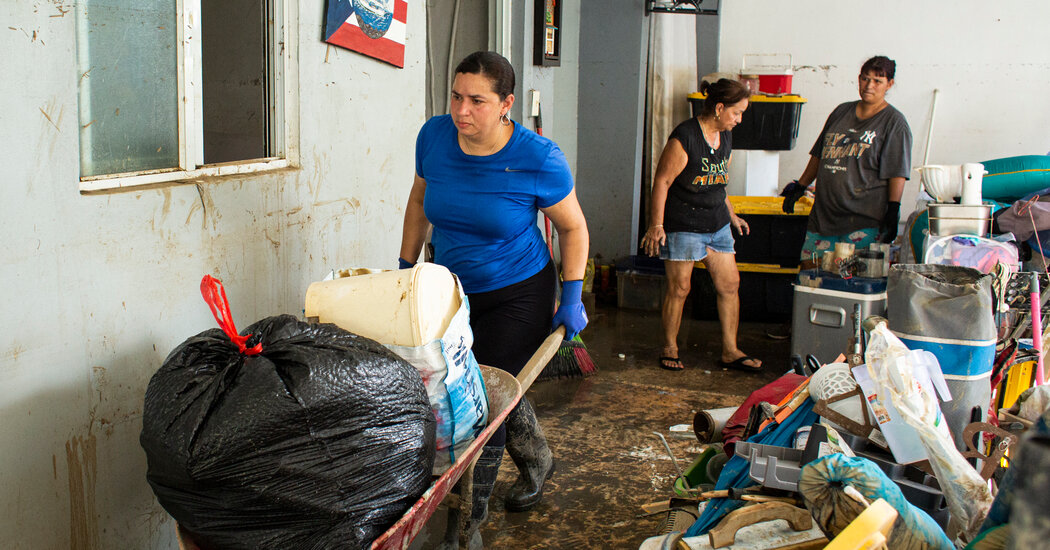 Neighbors are moving ruined appliances and, with brooms and shovels, wiping away the mud that coats their homes. They learned from Hurricane Maria not to wait for official help.

TOA BAJA, P.R. — Five years after Hurricane Maria turned her neighborhood into a river of mud, María Cortés Dávila prepared once again to face the implacable waters with a broom.

This time, it was the aftermath of Hurricane Fiona, a storm with weaker winds that nonetheless managed to thrust more than a million people in darkness, trigger mudslides, flood neighborhoods and paralyze the island. The storm, now headed toward Bermuda, left something else in its wake: a massive cleanup job — and a deepening sense among residents here that recovery from this, and future storms, is largely up to them.

“When these communities get flooded, we are like an island,” she said. “Surrounded by water.”

By 5 a.m. on Tuesday, Hurricane Fiona’s floods had started to recede. Ms. Cortés Dávila put on a blue T-shirt, shorts and knee-high rubber boots and awoke her three children, mother and grandmother to begin the first of many long cleanup days in what has, for many Puerto Ricans, become a dreaded storm season ritual.

“This would happen every 15 years, but now we’re having these floods way too often,” Ms. Cortés Dávila said as the baking sun bore down on her neighborhood in Toa Baja, west of San Juan, helping to clear the water that had rushed into the first floor of her home.

Since Hurricane Fiona struck on Sunday as a Category 1 storm that dumped about 30 inches of rain on parts of the island, Puerto Ricans have emerged from their battered and damp homes and shelters to evaluate the damage. Most people remain without electricity and water, bringing back painful memories of the havoc that Hurricane Maria, a near Category 5 storm, wrought on Sept. 20, 2017.

On Wednesday, Gov. Pedro R. Pierluisi said he expected a “large part of the population” to have power and water restored by the end of the day, though the number of customers getting service back has increased only gradually. More than 70 percent of the island’s 1.5 million electrical customers still did not have their power back in the afternoon.

The governor has been joined since Tuesday by the head of the Federal Emergency Management Agency, Deanne Criswell, with whom he planned to visit remote towns in Puerto Rico’s central mountainous regions. Ms. Criswell said she had already seen some significant damage — and residents taking matters into their own hands.

The island, which has struggled with outages in recent years, could be without power for days after being hit by Hurricane Fiona.

“I saw neighbors helping neighbors,” she said. “I met a woman named Ana who opened up her own home and her own driveway to help create a path for the community. With the bridge that was washed away, her home became that pathway to help get food and water to the rest of her community.”

Mr. Pierluisi asked the White House on Tuesday to approve a major emergency declaration, allowing more federal aid to flow to the island. He said crews were sending supplies to remote communities left with little to no road access. Around the island, diggers and other heavy machinery came out. So did water trucks that drew long lines of residents with empty containers.

For Ms. Cortés Dávila in Toa Baja, Hurricane Maria had been worse: Back then, the floods reached the second stories of homes and forced dramatic rooftop rescues in the middle of the night.

She pointed at a wall with a fresh horizontal stain left by mud, about eight feet high. “That’s the mark left by this flood,” she said. Parallel to it — but four feet higher — was another brownish, by now almost imperceptible line. “And that’s the mark from Maria,” she added. “We keep collecting marks.”

Hurricane Maria and the slow response that followed deeply scarred Puerto Ricans and left them with little faith that the authorities would help in a time of need.

After Maria, Ms. Cortés Dávila, 42, a lifelong resident of the Villa Calma 2 community in Toa Baja, vowed never again to be caught unprepared by a disaster. By 2019, she and her neighbors had founded a community nonprofit out of an abandoned school to offer workshops and prepare emergency plans.

Villa Calma 2, a community of 125 houses, sits in a vast plain that was once a sugar cane plantation, surrounded by irrigation canals that flow into the La Plata River, which passes nearby on its final stretch before reaching the Atlantic Ocean. About 925 more families live in similarly low-lying communities. Hurricane Fiona, like Hurricane Maria, caused the La Plata River to breach its banks.

“After Maria, I didn’t know anyone. I didn’t know who to ask for help,” Ms. Cortés Dávila said. “I would get on Facebook and see that this foundation was going to a community to help, and I would just write to them, to let them know my community also needed that aid.”

Now, she and her neighbors from the Asociación de Comunidades Unidas Tomando Acción Solidaria, the aid group they founded to help their communities be self-sufficient in the face of adversity, are the people others reached out to for assistance.

Ms. Cortés Dávila has been involved in her community since she was a young woman. As a teenager, she taught catechism at a local Catholic parish and later organized arts and crafts classes for older adults. In the years since helping to found the community association, she and her neighbors have built an industrial-grade kitchen from which they fed people during the coronavirus pandemic — and now plan to do so again after Hurricane Fiona.

On Tuesday, the first day of cleanup, Ms. Cortés Dávila went to her sister’s home and, with her family’s help, wiped out the mud with brooms and shovels. Some of them wore gloves. There was no running water.

From there, they moved on to Ms. Cortés Dávila’s house, where neighbors also lent a hand. They piled ruined appliances — the washer, the dryer, the grill — into a corner. An ever-growing brigade of friends arrived and split up to go to the house across the street.

There, Laritza Rolón Echevarría, 24, and her partner, José Rodríguez Marrero, 27, had lost their home — again.

The couple had been living downstairs with their three young children; the back terrace contained the construction materials, furniture and cabinetry they were hoping to install upstairs. Like many in the neighborhood, they had hoped to move to higher ground to avoid losses from rising floodwaters.

The couple has already faced two floods since getting this house — including one in February that soaked some of their belongings in three feet of water.

Ms. Rolón Echevarría’s grandparents, who have lived down the street for four decades, have seen and survived many more. They also live on the ground floor. Their house had been recently furnished with a new dining room table, sofa and chairs, bought on credit from a local furniture store. Hurricane Fiona drenched them all.

Ms. Cortés Dávila said she was tired from the recurring tragedies. She would like to move away, she said, to a house where she could offer her family a safe place whenever a hurricane threatens with powerful wind and heavy rain. But she said there were no real housing options for people like her and her neighbors.

“This house I’ve built little by little, with a lifetime of work and getting personal loans that I’ve repaid,” said Ms. Cortés Dávila, who planned to install a ladder on the side of her house to reach her rooftop. “I don’t owe it to anyone.”

After so many hours of hard labor, her eyes welling with tears, she confessed her deep fear of the floods.

“I don’t know how to swim,” she said. “But I can’t show it. I need to be strong for my family and community. But, the truth is, I do get afraid.”

Deepika Padukone calls out troll who abuse her on Instagram, says ‘Your family must...

This National Dark Chocolate Day, learn how to best satisfy your sweet cravings with...