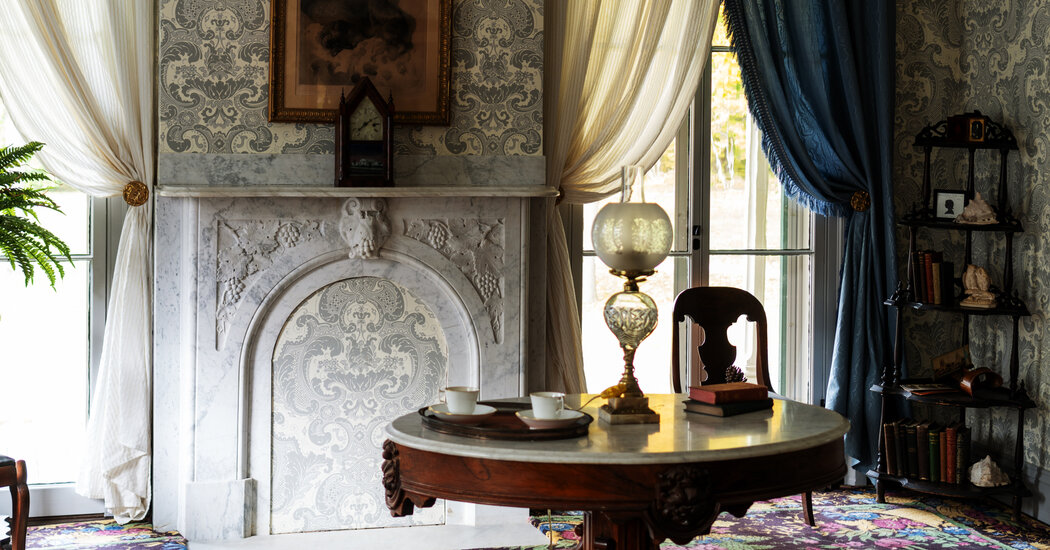 The poet’s house museum in Amherst, Mass., gets a vibrant, historically correct makeover, underlining that she was not just a reclusive woman in white.

AMHERST, Mass. — “Here is our Wizard of Oz moment,” a guide asked on a recent afternoon, before opening a door and stepping into the front foyer of the Emily Dickinson Museum.

It’s not a comment you expect at the former family home of a poet cemented in the public imagination as the reclusive woman in white. But then Dickinson isn’t who she used to be, either.

Three years ago, the Apple TV+ show “Dickinson” gave her a 21st-century update — a fanciful postmodern mash-up that many scholars embraced as true to the poet’s radical spirit. And now, the museum has reopened after a two-year, $2.5 million renovation that restores the once-austere, sparsely decorated interiors to their richly furnished, almost Technicolor 1850s glory.

The spiffying-up — the latest stage of a long-range plan — includes hand-painted moldings, recreated wallpaper and carpets exploding with quasi-psychedelic flowers. And throughout, there’s a seamless blend of pieces from the Dickinson family and selections from a large trove of antique furnishings and props donated last year, in an unexpected twist, by the Apple show.

“People come here with preconceived notions,” the guide, Melissa Cybulski, said, stepping into the front parlor, where ladybugs were flitting by a window. (“Very Emily,” she said.)

“They know the myth: that she was odd, she was reclusive, she never married, she always wore white, she was obsessed with death — what was wrong with her?” Cybulski continued. “But hers was a full-color life.”

Few writers’ work is as intertwined with a place as Dickinson’s is with the yellow brick house at 280 Main Street, not far from Amherst College. She was born here in 1830, and she died here in 1886. And it was here where she wrote her more than 1,800 enigmatic, radically experimental poems — and where her sister, Lavinia Dickinson, discovered roughly 1,100 of them in a locked chest of drawers after her death, copied out neatly into hand-sewn books known as fascicles.

Even before it became a full-time museum in the 1990s, the house was a pilgrimage site, with visitors regularly knocking on the door (or simply coming in unannounced). And in the 21st century, interest has continued to grow.

Since 2001, visitorship has increased from about 7,000 people a year to about 15,000 before the pandemic, Jane Wald, the museum’s executive director, said in an interview. And even before the reopening in August, she said, their online programs showed a growing younger audience, including from the L.G.B.T.Q. community. (The show presents Dickinson as sexually fluid, involved with both male suitors and her best friend and sister-in-law, Susan Dickinson — an idea supported by some scholars.)

The show, Wald said, “has motivated a new audience and also opened the window of possibility for our traditional core audience.”

But even before that, Wald said, the house’s mission had shifted toward a more expansive approach, as reflected in its current mission statement: “to spark the imagination by amplifying Emily Dickinson’s revolutionary poetic voice from the place she called home.”

The museum actually consists of two houses, joined together in 2003, following one of the more tangled and contentious sagas in American literary history, known in Dickinson circles as “the war between the houses.”

Across the generous lawn from the Homestead (as the main house is known) sits the Evergreens, an Italianate mansion built for her brother, Austin Dickinson, and his wife, Susan. After Emily’s death, Lavinia gave her manuscripts to Susan to organize for publication. But when she took too long, they went to the writer Mabel Loomis Todd, Austin’s mistress, who helped edit the first published collection of Dickinson’s poetry.

What followed was a complex, multigenerational feud over the fate of her manuscripts and other artifacts. (The manuscripts ended up split between Amherst College and Harvard University, which today claims copyright over the text of all Dickinson’s poems, letters and manuscripts.)

The Homestead was sold out of the family in 1916, and then bought in 1965 by Amherst College, which used it as faculty housing (with the stipulation that the faculty member’s spouse curate the house and welcome some visitors).

The Evergreens, meanwhile, was almost torn down, in accordance with the will of Dickinson’s niece Martha Dickinson.

“She didn’t want to see it covered with Amherst College football memorabilia,” Wald said, as had happened to other stately residences turned into fraternity houses at the college.

When Martha died in 1943, the Evergreens passed to her friend Alfred Hampson, and then to his widow, Mary, who lived there until 1988, keeping it as a shrine and rarely admitting visitors. Amherst acquired the house in 2003, after a court ruling spared it from the wrecking ball.

Today, the Evergreens (currently closed to the public for repairs) remains a magnificently decrepit time-capsule, complete with crumbling plaster, heaps of threadbare furniture and faded squares on the walls where pictures once hung. The Homestead, by contrast, looks shelter-magazine ready, down to the pine cones placed artfully on chairs (to discourage unauthorized sitting).

The house is presented as it might have looked in 1855, when the Dickinsons moved back in following a period of financial hardship, and when Emily, then 25, began her most productive period.

The downstairs library, the first stop on the tour, gives a sense of the literary culture Dickinson emerged out of. Copies of The Springfield Daily Republican (where a handful of her poems were published anonymously in her lifetime) and The Atlantic Monthly sit on the tables, as if just put down.

To recreate the 1850s décor, the museum’s researchers did paint-chip analyses and searched for wallpaper scraps left near baseboards and windows. (In the library, Cybulski flipped open a hidden panel in the newly papered wall to reveal a surprise discovery: a psychedelic rainbow of faded wallcovering from the 1830s.)

They also drew on clues found in family letters and other documents. Wald quoted the editor Thomas Wentworth Higginson’s evocative (if vague) description of the Dickinson parlor: “cool, stiffish and dark.”

Other clues were a bit more helpful. Martha had described the parlor as having a Brussels carpet, with baskets of flowers spilling out to the corners of the room.

“We searched and searched for months to find something that matched that description,” Wald said. Then, in the archives of a mill in Britain, they located a pattern that matched the date. It hadn’t been woven in more than 100 years.

The house is also furnished with Dickinson’s poetry, in sometimes subtle ways, starting with a sign in the bathroom exhorting visitors not to flush unauthorized paper (“What I can do — I will-/Thou it be little as a Daffodil -”). Throughout the rooms are facsimiles of Dickinson’s manuscripts, including poems embedded in letters, written on envelopes and scraps, even inscribed on candy wrappers.

Dickinson “had such freedom in not publishing,” Cybulski said. “She could leave all those variants in.”

Then it was time to enter the sanctum: Dickinson’s bedroom.

Inside the rose-wallpapered room (restored in 2015) was a (tiny) dressmaker’s dummy wearing a reproduction of one of her famous white dresses and, across the bed, her brightly patterned shawl. A reproduction of her writing desk (the original is at Harvard) sat at the west-facing window, in accordance with Martha’s recollections.

Previously, tours of the house ended here. But now, for the first time, visitors can also see the small back bedroom where Dickinson’s mother lived for nine years after suffering a paralyzing stroke, tended by Emily, Lavinia and the family’s Irish maid, Margaret Maher.

The room is connected to Dickinson’s by a hidden corridor, emphasizing a less noted role Dickinson played in her lifetime: caregiver.

At the end of the tour, Cybulski led visitors down the stairs out the backdoor, where Dickinson’s own coffin was carried out to nearby West Cemetery in 1886. The inscription on her gravestone is simple: “Called back.”

The crowds who still flock to Amherst, Wald said, show how much the voice of this radical 19th-century writer still calls forward. She said she hoped the house offered each visitor a way into poetry, and “to tapping their own creativity.”

“Because that’s what Emily Dickinson did,” Wald said. “She found a voice inside herself.”