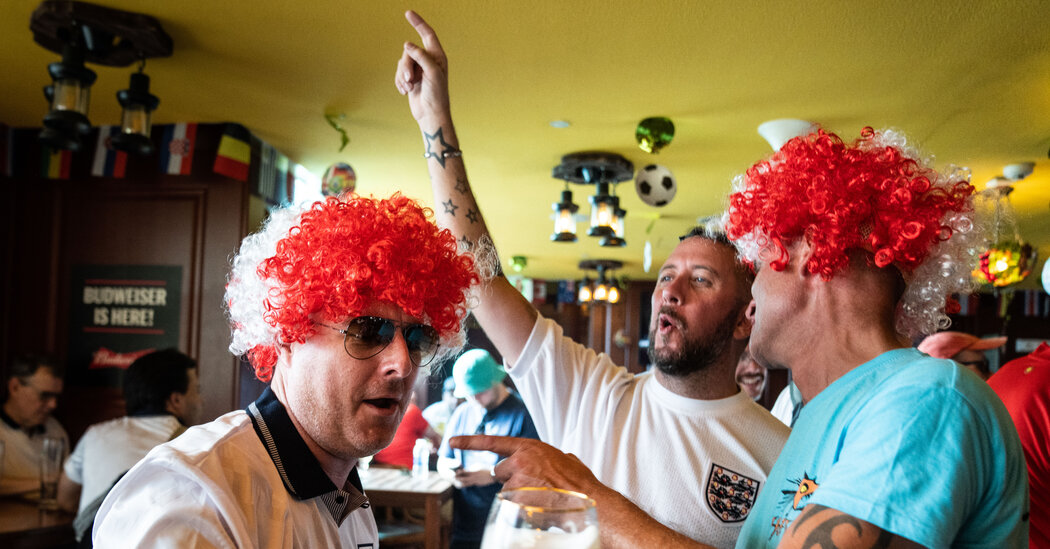 Qatar’s late changes to the rules for drinking at World Cup stadiums is only a temporary inconvenience if you know where to look.

DOHA, Qatar — Faced with the disturbing prospect of enduring an entire World Cup match with no alcohol after the Qatari authorities banned the sale of beer in and around the stadiums, Matthew Wyatt did what any England fan would do in a similar emergency. He deployed his backup plan.

“He was under pressure to find an appropriate establishment,” explained his friend Mel Kenny.

One option was to consult the Qatar Alcohol Map, a list of drinking venues that had been devised by a concerned American and was spreading like samizdat as fans poured in to this tiny, mostly alcohol-free, nation. But Wyatt and Kenny instead made their way to the Red Lion, a pub discreetly tucked inside a Doha hotel, and one that, the Daily Star tabloid back home helpfully reported, offered “beer-starved England fans a boozy oasis in the desert.” It was already heaving with fans.

Many countries’ fans enjoy beer with their soccer, of course. Americans and Argentines, Germans and Mexicans and (mostly) everywhere in between. But there remains something about the English.

“I’ve never seen a sober English football fan in my life,” said a 36-year-old fan named Simon, who declined to give his last name, perhaps because he was a little un-sober himself. As for alcohol and England matches, he said: “I believe the word is ‘essential.’ Or ‘mandatory.’ Or several other synonyms.”

Or, as Brad Hirst, who had come all the way from Burnley, a suburb of Manchester, said: “If you can’t drink, what’s the point?”

“Oasis” was one way of describing the Red Lion. On Monday, it seemed like a kind of Green Zone for England supporters attempting to drink much as physically possible before making their way to Khalifa International Stadium, where their team was scheduled to play Iran. (They then cheerily serenaded their team as it won, 6-2.)

Fans all had their individual approaches.

“We’re hydrating,” said Wyatt, referring to the many empty bottles of beer, and the many full bottles of water, at their booth. “Just like the instructions the British Embassy sent out to us.”

A couple of tables away, Gary Douglas, 52, was measuring the time in pint glasses. “We got here six beers ago,” he said. Douglas and his friend Neil Tattersall, 43, were surveying their second round, six more pints — three apiece — laid out in a row. (“I’m just too lazy to queue up each time,” Tattersall said of buying in bulk.) They figured they had an hour more, give or take.

The fans had a nuanced view of the World Cup’s sudden no-beer rule. Many said they felt that it was important to respect Qatari culture, and that they did not really mind forgoing alcohol during the actual playing time, since this is a common rule in stadiums in the Premier League and elsewhere in Europe.

What is the World Cup? The quadrennial event pits the best national soccer teams against each other for the title of world champion. Here’s a primer to the 2022 men’s tournament:

Where is it being held? This year’s host is Qatar, which in 2010 beat the United States and Japan to win the right to hold the tournament. Whether that was an honest competition remains in dispute.

When is it? The tournament opened on Nov. 20, when Qatar played Ecuador. Over the two weeks that follow, four games will be played on most days. The tournament ends with the final on Dec. 18.

Is a winter World Cup normal? No. The World Cup usually takes place in July. But in 2015, FIFA concluded that the summer temperatures in Qatar might have unpleasant consequences and agreed to move the tournament to the relatively bearable months of November and December.

How many teams are competing? Thirty-two. Qatar qualified automatically as the host, and after years of matches, the other 31 teams earned the right to come and play. Meet the teams here.

How does the tournament work? The 32 teams are divided into eight groups of four. In the opening stage, each team plays all the other teams in its group once. The top two finishers in each group advance to the round of 16. After that, the World Cup is a straight knockout tournament.

How can I watch the World Cup in the U.S.? The tournament will be broadcast on Fox and FS1 in English, and on Telemundo in Spanish. You can livestream it on Peacock, or on streaming services that carry Fox and FS1. Here’s how to watch every match.

When will the games take place? Qatar is three hours ahead of London, eight hours ahead of New York and 11 hours ahead of Los Angeles. That means there will be predawn kickoffs on the East Coast of the United States for some games, and midafternoon starts for 10 p.m. games in Qatar.

But the sudden decree had blindsided them, interfering with their long-term pre-tournament drinking planning. And they resented being deprived of the chance to drink and socialize near the stadium as the game approached, a ritual that regularly brings together even supporters of different teams, usually mortal enemies, before matches at home and abroad.

The new regulation in Qatar meant they had to cram more drinking into a shorter period of time, followed by a too-long period with no beer at all. (Except water. Or Budweiser Zero, whose name speaks for itself.)

“We’re drinking five bottles at once, rather than pacing ourselves, which is not a good idea,” admitted Hirst, 32.

Qatar has strict rules about alcohol, and it has eased them to allow World Cup fans to drink at specially designated times and in specially designated locations. But visitors are still not allowed to smuggle bottles of liquor into hotels for clandestine drinking before decanting themselves into the street. Nor can you and your mates parade en masse through town spilling beer, chanting in an incoherent manner or drunkenly insulting people from other countries.

It is hard for the England fans to give up these activities, which are so much a part of their soccer culture, even if soccer’s worst days of hooliganism are in the past.

“To deny an Englishman a beer is to starve an Englishman,” said Kenny, who mentioned (several times) that he had turned 50 that very day.

Wyatt and Kenny, who met as students at the University of Manchester many years ago, have attended five World Cups together, starting with Japan and Korea in 2002. (They missed Russia, in 2018.) Some of their fondest tournament memories revolve around drinking, they said. In Japan, the brewer Sapporo held an epic event in which fans could drink as much beer and eat as much barbecued beef as they liked for a set amount of time; Wyatt and Kenny thought it might have been 150 minutes; they couldn’t remember exactly.

At another stop on that trip, Kenny drank so much that he almost didn’t make it out of the train station for the England-Sweden match. “I told him, ‘You go on without me,” he recalled.

But Wyatt refused to leave him behind. “He gave me something, like a chocolate bar, and that revived me,” Kenny said. The game, they both remembered, was a tie.

By then kickoff was approaching, and the fans in the Red Lion were getting rowdy. Some took up the standard England chant where they just keep repeating “England” over again, only it sounds like “Ing-er-land.” Paul Farrell, who was dressed as St. George, the patron saint of England — his costume included a linen smock, a chain mail hood and a custom-made shield — said that he wasn’t drunk per se, just “high on life.”

As he left, he began to sing an expletive-enhanced chorus of “They’ll be no drinking in Qatar,” to the tune of “She’ll Be Coming ’Round the Mountain.”

The English fans then left the bar to head to the stadium, only to be replaced by a new batch: Welsh fans, resplendent in their dragon insignia, and the Dutch, all in orange.

“We always drink before the game, but we don’t go out to get hammered,” said Thomas Bowen, 27, from Wales.

He said while he respected the English approach, his countrymen had their own traditions. “They get quite rowdy,” he said. “We just like to sing.”

Section 144 imposed in Noida till January 31; no drones, protests allowed