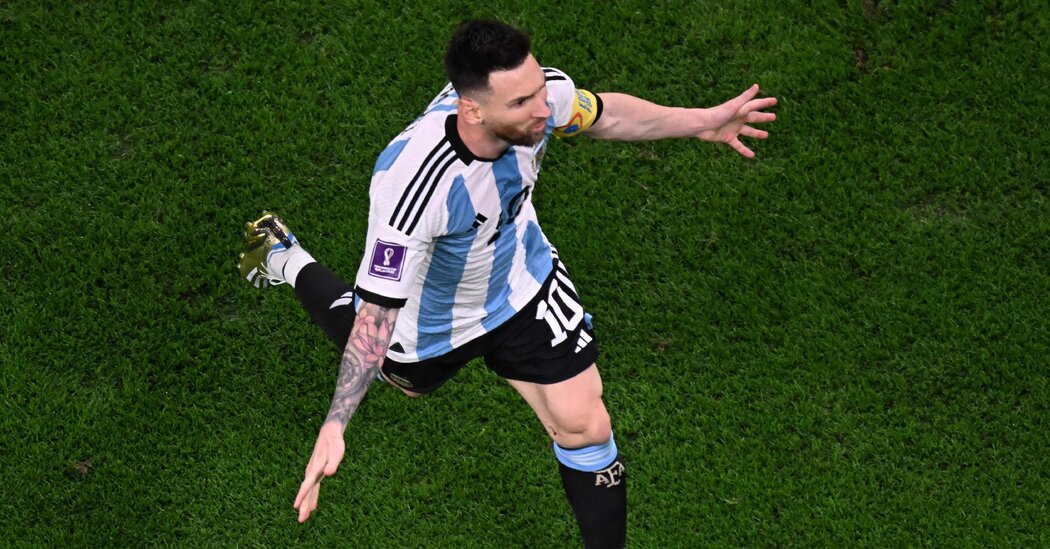 France and England, Argentina and Brazil, Messi and Ronaldo: The quarterfinals offer everything except an easy path to the trophy.

DOHA, Qatar — And then there were eight. In a little more than two weeks, the World Cup has whittled its field from 32 hopefuls to eight genuine contenders, most of whom would regard anything less than the ultimate success as something of a failure.

Not all of them, of course. Morocco, the standard-bearer for both Africa and the Arab world, has made the quarterfinals for the first time. It will not go lightly now, but anything else, from this point on, will be a welcome bonus. A rational analysis would suggest this may be Croatia’s limit, too.

All of the others, though, were never here for the atmosphere. They are in Qatar for glory. England and France have a depth of resources none of other teams can match. Portugal wants to deliver a final triumph for Cristiano Ronaldo, even if he is not starting. Louis van Gaal, the Dutch coach, has repeatedly said that playing soccer is pointless if you’re not trying to win.

And then there are the twin South American giants: Brazil, probably the most impressive side in the tournament so far, the scent of a sixth World Cup in its nostrils; and Argentina, inspired by and devoted to Lionel Messi, determined that it should be here that his career reaches its climax.

There is no sight more ominous for the teams left in this tournament than that of Brazil having fun. Its last three World Cup campaigns, at least, have been long months of angst and tension and inevitable heartache. In Qatar, Neymar, Vinícius Júnior and the rest of Tite’s team are light-footed, spring-heeled, and all the more menacing for it.

What is the World Cup? The quadrennial event pits the best national soccer teams against each other for the title of world champion. Here’s a primer to the 2022 men’s tournament:

Where is it being held? This year’s host is Qatar, which in 2010 beat the United States and Japan to win the right to hold the tournament. Whether that was an honest competition remains in dispute.

When is it? The tournament opened on Nov. 20, when Qatar played Ecuador. Over the two weeks that follow, four games will be played on most days. The tournament ends with the final on Dec. 18.

Is a winter World Cup normal? No. The World Cup usually takes place in July. But in 2015, FIFA concluded that the summer temperatures in Qatar might have unpleasant consequences and agreed to move the tournament to the relatively bearable months of November and December.

How many teams are competing? Thirty-two. Qatar qualified automatically as the host, and after years of matches, the other 31 teams earned the right to come and play. Meet the teams here.

How does the tournament work? The 32 teams are divided into eight groups of four. In the opening stage, each team plays all the other teams in its group once. The top two finishers in each group advance to the round of 16. After that, the World Cup is a straight knockout tournament.

How can I watch the World Cup in the U.S.? The tournament will be broadcast on Fox and FS1 in English, and on Telemundo in Spanish. You can livestream it on Peacock, or on streaming services that carry Fox and FS1. Here’s how to watch every match.

When will the games take place? Qatar is three hours ahead of London, eight hours ahead of New York and 11 hours ahead of Los Angeles. That means there will be predawn kickoffs on the East Coast of the United States for some games, and midafternoon starts for 10 p.m. games in Qatar.

On paper, Brazil has been given a helping hand by the kindness of the draw, too. It qualified so comfortably that it could afford to lose its final group game — for which Tite had made a raft of changes — and its round-of-16 meeting with South Korea was such a mismatch that Weverton, the third-choice goalkeeper, played the final 10 minutes. In the quarterfinals, Brazil will be expected to make short work of an aging Croatia.

The thing about Croatia, though, is that they are good at this. In Luka Modric, Mateo Kovacic and Marcelo Brozovic, Croatia possesses a midfield of rare balance. Four years ago, the core of this group showed it knew how to negotiate knockout soccer well enough to reach a World Cup final. Brazil will rightly be favored, but it should not expect it to be fun.

There are two ways of reading Argentina’s campaign in Qatar. One, inflected by that early but ultimately inconsequential defeat to Saudi Arabia, is that this is a team on a permanent knife-edge, oscillating wildly from despair to triumph and back again, one that will tire not just physically but emotionally in its desperation to deliver a World Cup to Lionel Messi.

The other, somewhat kinder, interpretation is that Argentina’s coach, Lionel Scaloni, has slowly crafted his team into one capable of being a genuine force in the tournament. He has drafted Enzo Fernández into midfield, adding a little dynamism; he has switched out the toothless Lautaro Martínez up front for the more energetic Julián Álvarez. Against Australia, Argentina looked far more poised than it had against the Saudis only 10 days earlier.

Now, it faces a reprise of one of the World Cup’s classic quarterfinals — Argentina lost to the Dutch at this stage in Marseille in 1998, a game illuminated by a wonderful winning goal from Dennis Bergkamp — and one of its great rivalries. Argentina beat the Dutch in the 1978 final, lost to them in 1998, then beat them again in the 2014 semifinals. Argentina has felt, for much of this tournament, like a team playing for history. The problem with that is that it depends on whose history you are reading.

For the better part of a decade, Portugal has been something of a contradiction. The country has for years boasted enough individual talent to match any team on the planet and yet, under the aegis of Fernando Santos, it has been assiduously, unapologetically, and in many ways successfully dour, as if a group of the finest artists in the world had been gathered together and asked to wallpaper a bedroom.

That all changed on Tuesday evening, thanks (seemingly) to the biggest call of the tournament: Santos relegated Cristiano Ronaldo, a national icon and one of the two best players of his generation, to the bench, and cut Portugal loose. Gonçalo Ramos, his direct replacement, scored a hat-trick in a 6-1 rout of the Swiss, and Otávio and João Félix thrived in a more dynamic system.

Morocco, then, presents a test both of Santos’s resolve — does Ronaldo remain in reserve? — and Portugal’s newfound sense of adventure. The first North African or Arab country to make it this far in a World Cup has played four games in Qatar. In front of its raucous, fervid support, swollen by the backing of much of the rest of the region, it has yet to concede a single goal off an opponent’s foot, even in a penalty shootout. Its approach to Portugal will be the same as in its victory against the Spanish: sit tight, stay back, and pounce on the break.

France, the reigning champion, has sailed through this tournament with a sort of airy inevitability: breezily scoring four after seeing its pride pricked by Australia, comfortably beating Denmark, losing to Tunisia because it seemed funny, and then expertly dispatching Poland in the first knockout round.

Such serene progress bodes well, particularly given that — by the time the group stage ended — France had lost so many players to injury that Didier Deschamps, its coach, had grown so weary of trying to replace them that he simply stopped. It seemed a risk at the time, but it turns out that the absence of Paul Pogba, N’Golo Kanté, Karim Benzema and the rest is but a minor inconvenience when you still have Kylian Mbappé.

That said, England will present a far stiffer challenge than anything the French have faced thus far. No team has scored more goals than Gareth Southgate’s side — like Portugal, it has mustered 12 in four games — and, in Jude Bellingham, England possess one of the breakout stars of the tournament. After reaching the semifinals in 2018 and the European Championship final in 2021, England looks like a team ready to take the next step.

Kyrie Irving Says He Wants to Change His Narrative in Dallas

Killings of Three Muslim Men in Albuquerque May Be Linked, Police Say

Aparshakti Khurana to star in suspense thriller with R Madhavan

Was replaced by A-list actor in film without being informed: Harleen Sethi