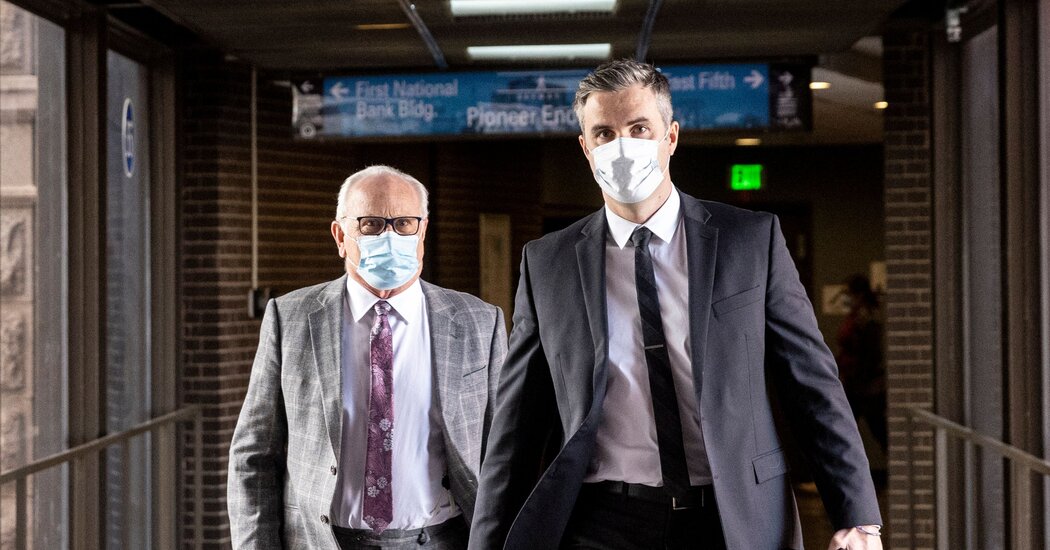 Thomas Lane, 39, helped to hold Mr. Floyd down while another officer fatally knelt on his neck. He was the only officer to suggest they should roll Mr. Floyd on his side so he could breathe.

ST. PAUL, Minn. — Thomas Lane, a former Minneapolis police officer who held down George Floyd’s legs as he gasped for air while dying under the knee of another officer, was sentenced to two and a half years in prison on Thursday.

A federal judge in St. Paul handed down the sentence to Mr. Lane several months after a jury found him guilty of violating Mr. Floyd’s rights by not providing him with medical care after Derek Chauvin, the other officer, knelt on his neck for more than nine minutes. Mr. Lane, who is also waiting to be sentenced over a state manslaughter charge, will be the second officer imprisoned over Mr. Floyd’s death, which set off a summer of protests across the United States in 2020.

Mr. Lane’s sentence showed that the judge, Paul Magnuson, was willing to imprison a police officer who was not primarily responsible for Mr. Floyd’s death, though the sentence imposed was less than half as long as what prosecutors had sought. Mr. Floyd’s relatives had asked the judge to impose the maximum prison term possible and said afterward that they were upset by the sentence.

Mr. Lane and his lawyer declined to comment as they left the courthouse. The judge’s sentence was three months longer than what they had requested. Judge Magnuson called the crime a “very serious offense” but also called Mr. Lane a person of “outstanding character” and said he had received a flood of letters supporting him. The judge ordered Mr. Lane to surrender in October after he is sentenced in the state manslaughter case.

Civil rights trial. In February, Mr. Kueng, Mr. Lane and Mr. Thao were found guilty of willfully violating Mr. Floyd’s constitutional rights in federal court. Mr. Lane was sentenced to two and a half years in prison on July 21. Mr. Chauvin, who had also been charged with violating Mr. Floyd’s rights, reached a plea agreement in December 2021 and was later sentenced to 21 years in federal prison. His federal and state sentences are to be served concurrently.

Kristen Clarke, the assistant attorney general in charge of the Justice Department’s civil rights division, said Mr. Floyd would still be alive had Mr. Lane and other officers intervened.

“This sentence should send a message that protecting people in custody is the affirmative duty and obligation of every law enforcement officer, regardless of one’s rank or seniority,” Ms. Clarke said.

Mr. Lane, 39, was in his first week on the job as a full officer when he and three other officers arrived at a South Minneapolis convenience store on May 25, 2020, in response to a 911 caller who said that Mr. Floyd had used a fake $20 bill to buy cigarettes. Officers handcuffed Mr. Floyd and then forced him to the ground when he resisted being put in the back of a police car and said he was claustrophobic and could not breathe.

Mr. Floyd continued to say he could not breathe as officers put him face down on the pavement and Mr. Chauvin began to kneel on his neck. Mr. Lane held on to his legs as a third officer, J. Alexander Kueng, also held Mr. Floyd down with his knee and a fourth, Tou Thao, kept bystanders from intervening. By the time emergency medical workers arrived, they could not detect any pulse from Mr. Floyd.

All four Minneapolis police officers who were at the scene were charged with various crimes. Mr. Chauvin is serving a 21-year prison sentence after a jury found him guilty of murdering Mr. Floyd; he later pleaded guilty to violating Mr. Floyd’s rights. Mr. Lane and Mr. Chauvin are white, while Mr. Kueng is Black and Mr. Thao is Asian American. Mr. Floyd, 46, was Black and was a former security guard who had lost his job at the beginning of the coronavirus pandemic.

During the arrest, Mr. Lane twice asked Mr. Chauvin if they should roll Mr. Floyd onto his side so that he could breathe more easily, but he was rebuffed by Mr. Chauvin. Prosecutors had charged him with fewer crimes than they pursued against the other officers, and they asked the judge to sentence Mr. Lane to between about five and six and a half years in prison, less than they have sought in the other cases.

Mr. Lane pleaded guilty to a state charge of aiding and abetting second-degree manslaughter in May and is expected to be sentenced in September. His lawyers and state prosecutors have agreed to recommend a sentence of three years in prison that would run concurrent to his federal sentence, though a judge will ultimately decide.If that sentence is imposed, he would likely be released after spending just over two years in federal prison.

Mr. Kueng and Mr. Thao are scheduled to go to trial in January on charges of aiding and abetting both murder and manslaughter. They were tried along with Mr. Lane in the federal case and, like Mr. Lane, were both found guilty of violating Mr. Floyd’s rights by failing to provide medical aid. They were also found guilty of an additional charge of failing to intervene to stop Mr. Chauvin. A date has not been set for their sentencing.

A video of the police pinning Mr. Floyd to the ground — recorded by Darnella Frazier, who was 17 at the time — challenged the police’s initial narrative that Mr. Floyd had died following a “medical incident” and quickly set off protests in the Twin Cities and, shortly after, across the country.

The movement soon became one of the largest protests in U.S. history as millions of people marched to oppose racism and police abuse in thousands of cities. In some cities, the protests turned destructive; hundreds of buildings in Minneapolis were damaged, and a Minneapolis police precinct building was among the structures burned to the ground.

Traveling This Fall? Here’s What to Expect

Pictures of the Year