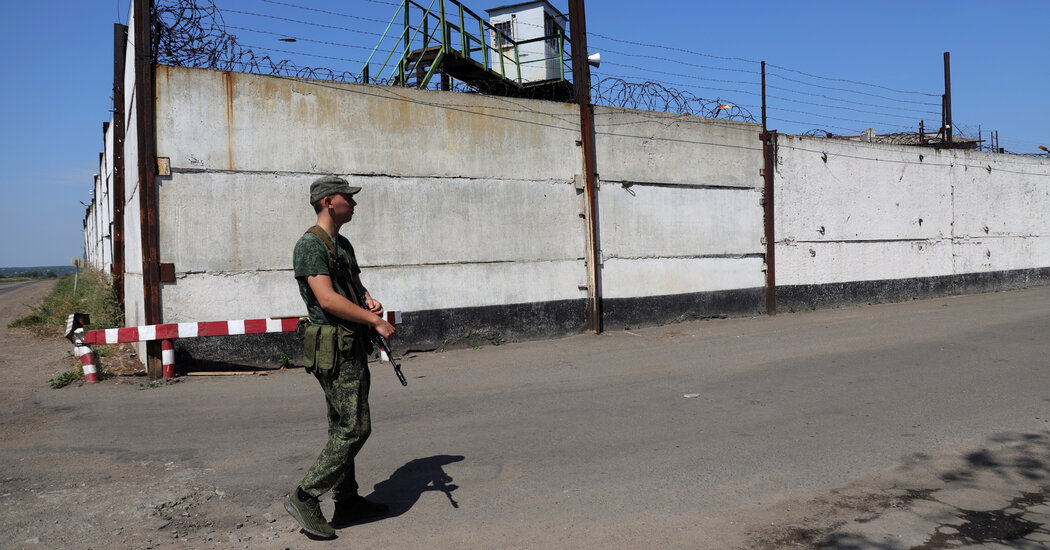 At least 50 captured fighters died in a blast at a prison in eastern Ukraine, with no clarity on exactly what happened and each country blaming the other.

ODESA, Ukraine — For the Russians, the Ukrainian fighters held prisoner at Correctional Colony No. 120 are a trophy. For the Ukrainians, they are war heroes.

Why either side would want any of them dead is a mystery, but that is the question that hung over the fighting in Ukraine on Friday after another deadly episode, with each side accusing the other of committing a war crime.

What is known is that an explosion ripped through a barracks of the prison camp in the Russian-occupied town of Olenivka in southeastern Ukraine early Friday morning, killing at least 50 captured fighters and maiming dozens more, according to both Ukrainian and Russian officials. Videos posted by Russian war bloggers show twisted metal bunk beds and the charred bodies of their former occupants.

Russia’s defense ministry said in a daily briefing on Friday that Ukraine had used an American-made advanced rocket system to strike the prison, aimed at sending a cautionary warning to Ukrainian soldiers who might be considering surrendering to Russian forces.

Ukrainian officials called those accusations absurd, charging that Russia caused the carnage to cover up atrocities they had committed at the prison. “Russian occupiers are pursuing their criminal goals, accusing Ukraine of committing war crimes, while hiding the torture and shooting of prisoners,” the Ukrainian general staff said in a statement.

Ukrainian forces have successfully employed the Western-supplied rocket system to destroy Russian ammunition depots and command centers with high degrees of accuracy. The HIMARs have fired hundreds of satellite-guided rockets in Ukraine, and there have been no reports of them mistakenly hitting civilian targets.

Neither side’s claims about the explosion at the prison could be independently verified. But Russia has regularly blamed its own attacks on civilian targets on Ukraine — including a strike in April that killed 50 people at a train station in Kramatorsk — asserting with no evidence that Ukraine is conducting so-called false flag operations to make Russia look bad.

A senior U.S. military official, speaking about the Russian assertions of a HIMARS attack on the camp, said: “We have seen no evidence to back these claims whatsoever.”

The prisoners held at the compound in Olenivka were not just any soldiers. An estimated 2,500 of them were fighters from the Azovstal Iron and Steel works in the city of Mariupol. Their 80-day battle against a vastly superior Russian force from bunkers beneath the mammoth factory has become legendary in Ukraine, with commanders’ faces now seen on billboards around the country.

Their surrender in mid-May marked the end of one of the war’s most brutal battles and handed Russia a significant victory, as well as a bargaining chip. Already, Ukraine and Russia have negotiated the exchange of 144 of the most seriously injured fighters and talks had been underway for another prisoner swap.

Russian officials have provided no conclusive evidence to back up their claims that Ukraine struck the prison. A Kremlin-friendly war blogger posted video of twisted metal shrapnel he said was the remains of a HIMARS rocket. No Russian guards were killed or injured in the explosion, according to Russian officials.

Ukraine’s intelligence agencies quickly weighed in. The domestic intelligence service, the SBU, published an audio recording Friday night of what the agency claimed were two Russian-backed separatist fighters discussing the explosion over the phone. In the call, which could not be independently verified, one person said there was no sound of any rocket before the explosion, and that Russian forces had likely blown up the barracks themselves.

Mykhailo Podolyak, a top adviser to President Volodymyr Zelensky of Ukraine, accused Russia of carrying out a “carefully planned attack” on the detention center, noting that there were no tactical military targets in the town of Olenivka. Russian forces had transferred Ukrainian soldiers to the barracks only several days before Friday’s attack, he said.

In a rare joint statement published on Friday night, Ukraine’s intelligence services, the military and the human rights ombudsman called the attack “an organized murder of Ukrainian prisoners” and called on the United Nations and the International Red Cross to travel to Olenivka with Ukrainian officials to investigate.

Prisoners who have been released from Correctional Colony No. 120 described hellish conditions. Guards provided just enough food for prisoners to survive and meted out regular beatings.

Vitaliy Sytnikov, a 35-year-old civilian who had been arrested while trying to evacuate other residents from Mariupol in March, described a disciplinary cell known as “the pit.”

“Almost every day we heard the beatings of prisoners of war there,” Mr. Sytnikov said in a telephone interview, adding that most of the victims of such treatment were soldiers from Azovstal.

Just before the Azovstal soldiers arrived in mid-May, two former prisoners said, the camp underwent a significant change. The separatist fighters who once stood guard were replaced by soldiers from Russia proper, and the separatists’ rebel flag was taken down and replaced by the Russian tricolor flag; the changes were a testament to the new prisoners’ importance.

But there was another significant change, according to Dmitriy Bodrov, 32, another civilian from Mariupol who was held at the camp. Russian soldiers began deploying near the barracks and firing off rockets in the direction of Ukrainian positions, seemingly trying to provoke Ukrainian forces into firing at the prison camp.

“Because of all that artillery, everything around was burning,” Mr. Bodrov said.

He said that in the time before his release on July 4, Ukrainian forces had never hit the territory of camp.

Mr. Bodrov said that the industrial zone at the camp, where Friday’s explosion occurred, had not previously been used to house prisoners. Gen. Kyrylo Budanov, the commander of Ukraine’s military intelligence service, said on Friday that construction of the barracks in that zone had been completed two days before and the prisoners moved there just before the explosion.

Because the Azov fighters were considered high value prisoners, it was unclear why Russia would want to kill them. In a statement, General Budanov offered one possible explanation, saying the attack appeared to have been carried out by Russian mercenaries acting outside the regular chain of command. The Russian defense ministry, he said, appeared to have been caught by surprise and forced to make justifications for the attack after the fact.

Late Friday evening, the Russian government indicated that there was no sorrow over the Ukrainian prisoners’ loss. In a stinging post on Twitter, the Russian embassy in Britain said that fighters from the Azov Regiment, a unit that made up a large percentage of the Azovstal defenders, “deserve execution, but death not by firing squad but by hanging, because they’re not real soldiers. They deserve a humiliating death.”

The Kremlin has a history of fabricating narratives to cover up potential war crimes. After a Russian antiaircraft system shot down a passenger airliner over Ukraine in 2014, the Kremlin contrived a series of exotic and ever changing explanations that never held up to expert scrutiny. At one point, Russian officials claimed that the aircraft, a Malaysia Airlines jumbo jet with 298 people onboard, was actually filled with corpses before take off.

The Ukraine war itself is premised on a Kremlin lie that Russian troops had been sent to liberate the country from a fascist junta that had established itself in Kyiv with the help of Western governments.

The attack this week came as video circulated online that appeared to show a Russian soldier castrating a Ukrainian prisoner of war and then shooting him in the head. Ukrainian officials have vociferously condemned the violence; the video’s authenticity could not be independently confirmed.

By Train, Bus or Uber, Giuliani Is Told to Come to Georgia

Uttar Pradesh: Supreme Court to give verdict on Tuesday in Hathras case