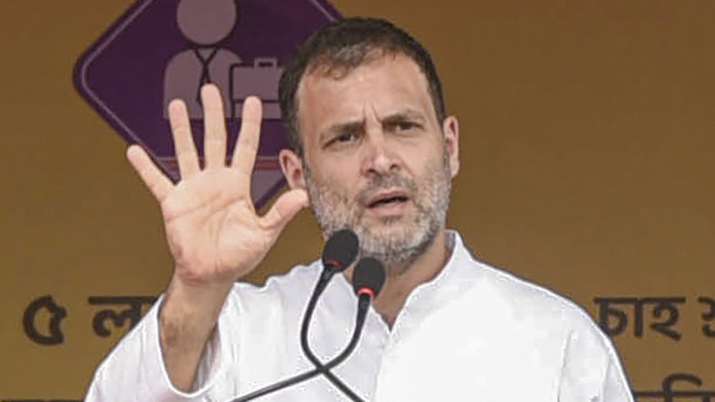 Chhattisgarh Chief Minister Bhupesh Baghel on Friday said that going forward, only Rahul Gandhi is acceptable as the Congress chief. Hailing Gandhi as a “fighter”, Baghel said he is the only one strongly raising his voice against the BJP government at the Centre.

Speaking at the India Economic Conclave, the Chhattisgarh chief minister also asserted that the Congress is fighting the assembly polls in Assam, Kerala, West Bengal, Tamil Nadu and Puducherry with full force and is confident of doing well.

Asked about the Chhattisgarh Congress’ resolution passed in February seeking Gandhi’s return as party chief and why there was no alternative to his name being projected by the party, Baghel said there is a “solid reason” for such a demand as he is the one who is strongly raising his voice against the ruling dispensation in these times.

“We fought a general election under his (Gandhi’s) presidentship only once, and we were defeated in a big way. After a defeat, people put the blame on others, but Rahul Gandhi accepted responsibility and resigned,” Baghel said.

Gandhi asked the party to elect a president who is from outside the Gandhi family, he noted. “But what happened? The Congress Working Committee and all states asked him (Gandhi) to be president,” Baghel said.

Asked why leaders such as Rajasthan Chief Minister Ashok Gehlot, Punjab Chief Minister Amarinder Singh and himself cannot be party chief contenders, Baghel said every person has an acceptability and “in the Congress, only Rahul Gandhi is acceptable (as president) – be it north, south, east or west”.

Last month also, Baghel, in an interview with PTI, had said Gandhi is the only leader who can take on the mantle of the Congress presidentship as he is the one who has been taking a strong stand on important issues without bowing to the government’s pressure.

Also, the Delhi Congress and the Chhattisgarh Pradesh Congress Committee (CPCC) had recently passed a resolution to re-appoint the Wayanad MP as the party president.

After a three-and-a-half-hour meeting, the Congress Working Committee (CWC), the party’s highest policy making body, had in January authorised incumbent chief Sonia Gandhi to schedule the internal elections after the conclusion of assembly polls. Sonia Gandhi took over as interim Congress president after Rahul Gandhi resigned in the wake of the party’s Lok Sabha debacle in May 2019.

In his remarks on Friday, Baghel also slammed the perception of the BJP being dominant throughout the country, saying in many states it is dependent on strong regional outfits.

“The BJP is losing in Bengal. We (Congress) are going to form a government in Assam. BJP has no presence in Kerala, and is going to lose in Tamil Nadu. Itá may win something in Puducherry, but has nothing in the other four states,” Baghel claimed.

Talking about the role of the rural sector in the country’s economy, Baghel said that the road to economic revival runs through agriculture and strengthening the rural economy is the only way to ensure overall growth.

The Chhattisgarh chief minister said the economy of India largely depends on agriculture, and with a focus on rural economy, Chhattisgarh has chalked out a detailed action plan and has initiated various schemes.

Replying to a question on where Chhattisgarh stands in the next decade in terms of economy, Baghel said that Chhattisgarh will be a great contributor to the economy as it is a state which is generating employment in the rural sector, doing value addition, setting up new industries and exploring the non-core sectors.

“We have been continuously working on improving the state’s economy by giving money in the pockets of the consumers. And this helped us in the tough times. We gave money to farmers through the NYAY scheme providing input support price, purchased their produce on MSP, gave maximum employment under MGNREGA — all this resulted in giving a boost to the state economy,” Baghel said.