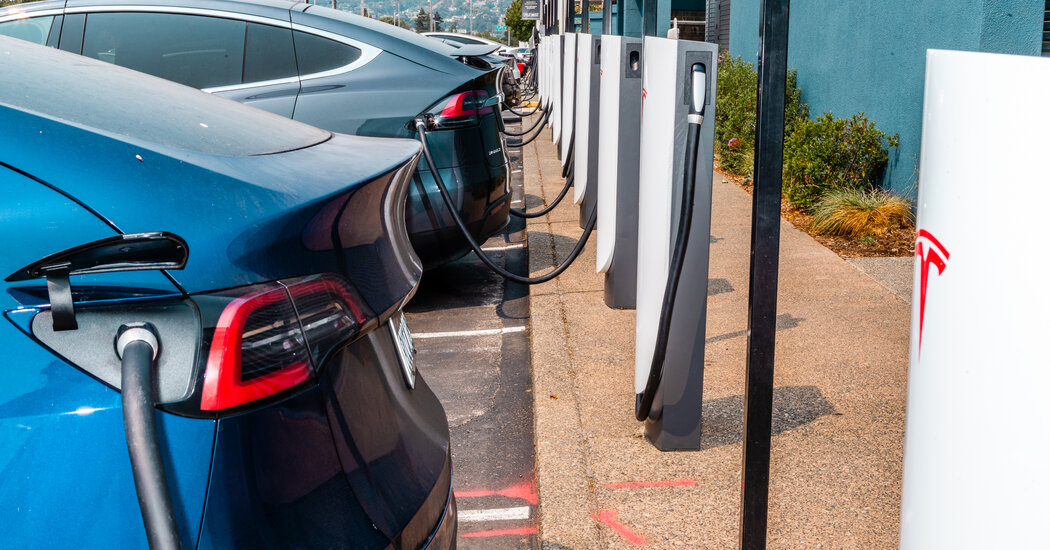 Carmakers may need several years to revamp their supply chains to meet new rules, but the legislation is still seen as a win for electric vehicles.

The climate and energy package approved by Congress on Friday aims to achieve two goals that are not always compatible: Make electric vehicles more affordable while freezing China out of the supply chain.

Auto industry representatives have been griping that the proposed $7,500 tax credits for electric vehicle buyers come with so many strings attached that few cars will qualify. Buyers can’t have very high incomes, the vehicles can’t cost too much, and the cars and their batteries have to meet made-in-America requirements that many carmakers cannot easily achieve.

“It’s going to be a lot harder for cars to qualify and for consumers to qualify for a federal tax credit for the purchase of an E.V.,” said John Bozzella, president of the Alliance for Automotive Innovation, which represents large U.S. and foreign automakers.

Some companies will benefit more than others from the sweeping legislation, known as the Inflation Reduction Act, which Democrats in the House approved on Friday, clearing the way for President Biden to sign it into law.

The new credits favor companies, like Tesla and General Motors, that have been selling electric cars for years and have reorganized their supply chains to produce vehicles in the United States. A joint venture between G.M. and LG Energy Solution will soon open a battery plant in Ohio, part of a wave of electric vehicle investment by automakers and suppliers.

Vehicles sold by Tesla and G.M. will regain eligibility for incentives that the carmakers had lost because they had sold more than their quota of 200,000 electric cars under current law. The legislation eliminates that cap.

The legislation could be thornier for companies like Toyota and Stellantis, which owns Chrysler, Jeep and Ram, because they have not started making or selling large numbers of battery-powered vehicles in the United States.

The legislation effectively penalizes newer electric car companies, like Lucid and Rivian, whose vehicles may be too expensive to qualify for the credits. The incentives apply to sedans costing no more than $55,000 and pickups, vans or sport utility vehicles costing up to $80,000.

Lucid’s cheapest sedan starts at more than $80,000. Rivian’s electric pickups start at $72,500 but can easily top $80,000 with options. The company said it was exploring whether customers could lock in the incentives by making a binding purchase agreement before the new law took effect.

Even automakers that might lose access to tax credits could benefit from the law in other ways. The bill contains billions of dollars to help carmakers build factories and establish local supply chains. Dealers will profit from a provision granting $4,000 credits to used electric vehicles, with few strings attached.

A substantive legislation. The $370 billion climate, tax and health care package that Congress approved on Aug. 12 could have far-reaching effects on the environment and the economy. Here are some of the key provisions:

Auto industry. Until now, taxpayers could get up to $7,500 in tax credits for purchasing an electric vehicle, but there was a cap on how many cars from each manufacturer were eligible. The new law would eliminate this cap and extend the tax credit until 2032; used cars will also qualify for a credit of up to $4,000.

Energy industry. The bill would provide billions of dollars in rebates for Americans who buy energy efficient and electric appliances. Companies would get tax credits for building new sources of emissions-free electricity. The package also includes $60 billion set aside to encourage clean energy manufacturing and penalties for methane emissions that exceed federal limits starting in 2024.

Health care. For the first time, Medicare would be allowed to negotiate with drugmakers on the price of some prescription medicines. The bill would also extend subsidies available under the Affordable Care Act, which were set to expire at the end of the year, for an additional three years.

Tax code. The bill would introduce a new 15 percent corporate minimum tax on the profits companies report to shareholders, applying to companies that report more than $1 billion in annual income but are able to use credits, deductions and other tax treatments to lower their effective tax rates. The legislation would bolster the I.R.S. with an investment of about $80 billion.

Low-income communities. The package includes over $60 billion in support of low-income communities and communities of color that are disproportionately burdened by climate change. Among the provisions are grants for zero-emissions technology and money to mitigate the negative effects of highways and other transportation facilities.

Fossil fuels industry. The legislation would require the federal government to auction off more public space for oil drilling and expand tax credits for coal and gas-burning plants that rely on carbon capture technology. These provisions are among those that were added to gain the support of Senator Joe Manchin III, Democrat of West Virginia.

“We have to look at this law in its totality,” said Margo Oge, former director of the Office of Transportation and Air Quality at the Environmental Protection Agency. “Is it perfect? No. It will create jobs, and it will be good for the climate.”

And once automakers make changes to their supply chains required by the bill, they will be able to offer customers generous incentives for the rest of the decade and then some. It may take a few years, but eventually the legislation will help make electric cars cheaper than gasoline and diesel vehicles, analysts say.

“The consumer tax credit was certainly not written in a way I would write it,” Senator Debbie Stabenow, a Michigan Democrat, told reporters this week, referring to the $7,500 incentive. But in the interest of getting the bill passed, she said, she acceded to the wishes of Senator Joe Manchin III, the West Virginia Democrat. Mr. Manchin has said it makes little sense to subsidize electric vehicles because demand is so strong that there are long waiting lists for many models.

Still, Ms. Stabenow added, “There are a lot of wonderful things in here for us.”

Some industry executives said it would take car companies five years to revamp their supply chains enough for their products to qualify for tax credits.

Others say that is overblown. “I would be shocked if that was the case,” said Joe Britton, executive director of the Zero Emission Transportation Association, whose members include Tesla and suppliers of batteries and raw materials.

While the organization would have preferred fewer restrictions, Mr. Britton said, “we still view this as a huge accelerant of electrification of transportation, especially compared to where we were a month ago.”

Some of the restrictions on eligibility for a tax credit may not be as strict as they appear and may be up for interpretation. For example, Ms. Stabenow said, it appeared that the $7,500 credit would be valid for all manufacturers through next year before content restrictions kicked in.

The legislation leaves it to regulators to decide which components would be classified as Chinese. It’s unclear, for example, whether Chinese companies like CATL, the world’s largest battery maker, would be frozen out of the market if they produced batteries in the United States. CATL has reportedly been exploring building a factory in the South to supply Ford Motor and BMW.

Most environmentalists have generally applauded the Inflation Reduction Act, despite concessions made to the fossil fuel industry at Mr. Manchin’s insistence, and even though the bill does little for public transportation or two-wheeled vehicles like scooters and electric bicycles.

The Sierra Club, the environmental nonprofit, has long been pushing to reward buyers of used electric vehicles and was happy to see that in the bill, said Katherine García, director of the organization’s Clean Transportation for All Campaign.

She said it also made sense not to provide incentives to high-income people who didn’t need the help. To qualify for the new electric vehicle credit, buyers cannot have taxable income above $150,000 if they are single filers or $300,000 for joint filers. “It stretches the dollars for the people who need the rebate the most,” Ms. García said.

Tesla, which makes expensive cars that are popular with affluent professionals, has managed to outsell all its rivals in the electric car business despite having lost access to the current federal electric-car tax credit several years ago. That suggests that luxury-car buyers will keep buying electric cars whether they receive a tax break or not.

Eventually the income limits will encourage carmakers to offer less-expensive vehicles, said Mark Wakefield, co-leader of the automotive and industrial practice at AlixPartners, a consulting firm. “You’re going to see a laser focus on getting below the $80,000 and $55,000 caps.”

The price limits and made-in-America rules will also encourage carmakers to develop cheaper batteries that require fewer imported raw materials. Tesla and other carmakers are already selling cars with batteries based on iron and phosphate, known as LFP, rather than batteries that contain nickel and cobalt, which are costly and come from countries with tainted human rights and environmental records. The iron-phosphate batteries are heavier but usually less expensive and longer lasting. The Inflation Reduction Act “is going to increase the growth of LFP,” Mr. Wakefield said.

The legislation contains other provisions that have received less attention but could accelerate sales of electric vehicles and reduce greenhouse gas emissions.

There is money to help businesses install electric vehicle chargers, for example. That is important for people who do not have garages or driveways where they can install their own chargers.

There are also tax credits of up to $40,000 for electric or hydrogen trucks and buses. Commercial vehicles account for a disproportionate percentage of greenhouse gases and harmful pollutants from the transportation sector because they spend a lot more time on the road than passenger cars.

The things that the bill pressures carmakers to do, such as using U.S.-made batteries, “cannot be achieved overnight,” Mary T. Barra, the chief executive of G.M., said during an appearance with Mr. Biden this month. But the legislation “will be part of the catalyst that helps us move forward,” she added.

Ford expressed almost the same view as G.M. “While its consumer tax credit targets for electric vehicles are not all achievable overnight, the bill is an important step forward to meet our shared national climate goals and help strengthen American manufacturing jobs,” the company said in a statement that urged the House to pass the legislation.

In San Antonio, the Poor Live on Their Own Islands of Heat