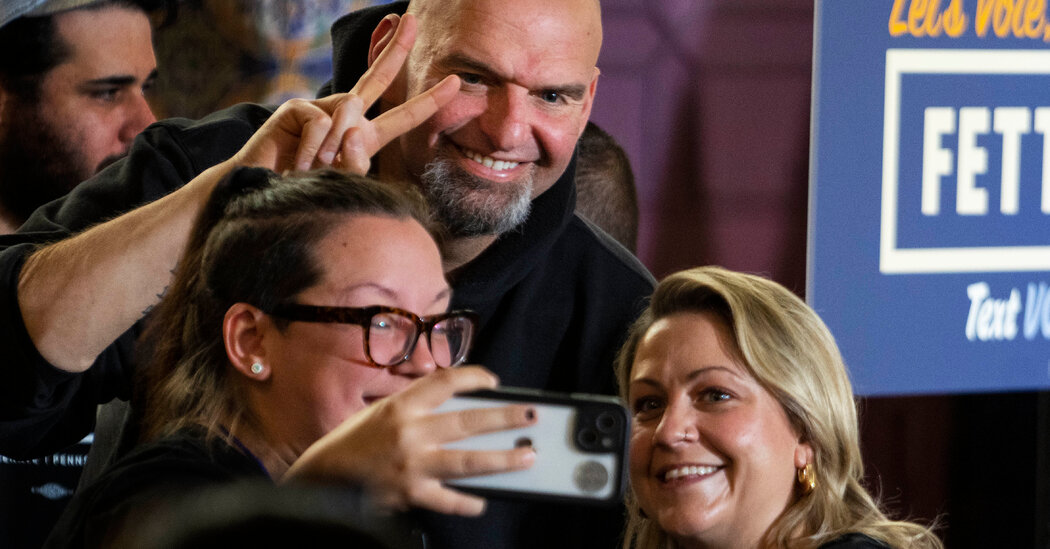 After a stroke and an uneven debate against his rival, Mehmet Oz, John Fetterman is leaning into his health challenges, to cheering crowds, as he campaigns for Senate in Pennsylvania.

COLLEGEVILLE, Pa. — John Fetterman was getting fired up at a campaign rally on Thursday evening, vigorously bashing his Republican opponent, Mehmet Oz, as a “fraud,” when the lingering effects of the stroke he had in May abruptly surfaced.

“This is a guy that’s, that’s made millions, with scam, ah — you know, scam …” Mr. Fetterman trailed off, trying twice more for the word he would eventually land on: “artist.”

“Eh — that’s another one, somebody can film that,” he continued, laughing a little and flinging his arms out to his sides, as if daring his critics to mock him. “Stroke thing. He sold miracles that I just couldn’t even pronounce even before I had a stroke.”

In the final days of the extraordinary Pennsylvania Senate race, in which a stroke survivor is running against a celebrity television physician, Mr. Fetterman is proactively acknowledging that his recovery remains a work in progress, leaning into the issue with a mix of humor, sarcasm and notes of empathy for others struggling with health challenges, as he competes in one of the most consequential contests in the nation.

Over the course of four events — the Thursday gathering, a Friday discussion with a Philadelphia-area congresswoman and two major Saturday rallies — Mr. Fetterman came across as high-energy and forceful at times, but uneven in crispness and fluency. He sometimes stumbled over a word, corrected himself midsentence or tacked on extraneous words. Abortion decisions belong “only between a woman and their doctor,” he said on Thursday. “Always has — should — been, and always should — will.”

But all of those appearances were a far cry from Mr. Fetterman’s debate performance last month, where his strikingly halting answers alarmed Democrats in Pennsylvania and nationally as they worried about a seat that could determine control of the U.S. Senate.

At his events, it was evident that Mr. Fetterman has fiercely devoted fans who know his biography, revel in his social media swipes at Dr. Oz and are eager to shout encouragement at any mention of the stroke. The gatherings sometimes had the feel of a movement campaign, but the question is how big that movement is, in a sharply divided state and at a challenging time for Democrats across the country.

Mr. Fetterman often sounded clear and relaxed during a Friday conversation with Representative Mary Gay Scanlon at a senior center in Delaware County, the day after he received a prized endorsement from Oprah Winfrey, who was instrumental in Dr. Oz’s rise to fame. He engaged in exchanges over issues like the infrastructure package as he used a closed captioning system, which was barely detectable to the audience.

“Have people heard that I’ve had a stroke?” he asked wryly near the beginning of that appearance. “I thought I was always pretty empathetic before, but after that, it’s really deepened just how critical it is to make sure that there needs to be things like captioning, which I’m using now — right now.” He mentioned that such accommodations allowed more people to “fully participate.”

And at rallies in Pittsburgh and Philadelphia on Saturday, he cracked self-deprecating jokes about the challenge of being a stroke survivor who had to speak before former President Barack Obama, widely regarded as the Democratic Party’s most powerful surrogate.

At his Thursday rally in Collegeville, Pa., a suburb of Philadelphia, he had several noticeable verbal missteps, sounding choppy as he discussed abortion rights or dealings with China.

But in tone and delivery, he often came across as vigorous and seemed to be enjoying himself during his roughly 18-minute performance that included riffs about sports — the Eagles and the Phillies were both playing that night. He was cheered on by a crowd that, by the end, was treating seemingly every other sentence as an applause line.

When he mentioned his time as mayor “of a community out in western Pennsylvania,” one attendee shouted out, “Braddock!” Mr. Fetterman previously served as mayor of Braddock, Pa., where he attracted attention for his efforts to revitalize a struggling steel town.

And as he ridiculed Dr. Oz over his real estate, he was cheered on by calls of “Yes, sir!” and “Crudité!”

Earlier this year, a video of Dr. Oz shopping for, as he put it, “crudité,” became a subject of significant mockery as Mr. Fetterman’s campaign tried to use it to illustrate that the Republican was out of touch.

A Marist poll conducted after the debate found Mr. Fetterman with a lead of six percentage points over Dr. Oz among registered voters and among those who said they definitely planned to vote. But an Emerson College Polling/The Hill survey of Pennsylvania voters, also conducted after the debate, found Dr. Oz with a narrow lead, but within the poll’s margin of error. Many party strategists on both sides of the aisle regard the race as very close.

While questions about Mr. Fetterman’s health have been a significant theme of the race, crime, the economy and Dr. Oz’s biography have been equally or, in some cases, more dominant. Mr. Fetterman has been pummeled with attacks on his criminal justice record as Republicans have zeroed in on his tenure as chair of the state’s Board of Pardons, and Democrats face a difficult national environment amid high inflation and President Biden’s weak approval numbers.

But polls also show warning signs for Dr. Oz, whose time as a TV doctor and ties to the state have repeatedly come under scrutiny. A Monmouth University poll released Wednesday found that 55 percent of Pennsylvanians surveyed thought he had little understanding of the concerns of voters like them. A Fox News poll showed that 44 percent of voters worried that Dr. Oz, whose longtime principal residence was in New Jersey, was not familiar enough with Pennsylvania to carry out the job of senator.

At this point in the race, with few undecided voters left, “it comes down to the intangibles, the character attributes of the candidates themselves,” said Robert Blizzard, a Republican pollster.

“What’s the more damning hit?” he said. “Is it Fetterman’s health and not being able to serve or ‘Oz is from Jersey’?”

Mr. Fetterman had a stroke on the Friday before the May primary election, though he waited until Sunday to disclose it. On Primary Day, he had a pacemaker and defibrillator implanted, which his campaign described at the time as a standard procedure that would help address “the underlying cause of his stroke, atrial fibrillation.” The statement prompted questioning from doctors. His campaign offered few other details about his condition in the days that followed.

In a statement in early June, his cardiologist said that he also had a serious heart condition called cardiomyopathy, but that “if he takes his medications, eats healthy, and exercises, he’ll be fine.”

And last month, Mr. Fetterman released a letter from his primary care doctor saying that “he has no work restrictions and can work full duty in public office,” and that he “spoke intelligently without cognitive deficits.”

“His speech was normal, and he continues to exhibit symptoms of an auditory processing disorder, which can come across as hearing difficulty,” said the letter from Dr. Clifford Chen, the primary care physician. “Occasional words he will ‘miss,’ which seems like he doesn’t hear the word, but it is actually not processed properly.”

Dr. Chen has donated to Mr. Fetterman’s campaign and to other Democrats, The Associated Press has noted.

One man, who declined to share his name on the record for fear of losing his job, came up to Mr. Fetterman in tears. The man, 42, showed Mr. Fetterman what he said was his pardon letter for a marijuana conviction. The candidate, who as lieutenant governor is the chairman of the Board of Pardons, glanced at the document briefly and appeared to thank the man, but they did not have an extended exchange.

“I just told him,” the man said afterward, still crying, “thank you for my freedom.”

In the final days of the campaign, both candidates are competing hard in the Pennsylvania suburbs, with dueling appearances in Bucks County on Sunday.

Dr. Oz campaigned with Senator Susan Collins of Maine and Representative Brian Fitzpatrick of Pennsylvania, two lawmakers regarded as more moderate Republicans, and his final pre-election rally on Monday is in suburban Montgomery County. He is walking a difficult line, though: He also appeared with former President Donald J. Trump and State Senator Doug Mastriano, the far-right nominee for governor who is anathema to many centrist suburban voters, at a rally on Saturday.

Mr. Fetterman, for his part, appeared on “The View” on Friday, which may have reached suburban women in particular, his team said. He campaigned with state Attorney General Josh Shapiro, the Democratic nominee for governor, in Bucks County on Sunday afternoon.

And his advisers and allies were elated by the endorsement from Ms. Winfrey, which was heavily covered on the local news.

“This week was ‘Fetterman Strikes Back,’” said Joe Calvello, a spokesman for Mr. Fetterman. He also noted the letter the candidate released from his doctor, and that Mr. Fetterman was “doing a recovery in public, in the public eye.”

On the campaign trail, Mr. Fetterman has a habit of narrating what that process entails.

“Sometimes I miss words, sometimes I might mush two words together,” Mr. Fetterman said on Thursday, to shouts of “We don’t care!”

“This,” he said at another point, “is what recovery looks like.”

SUV with explosives found near Ambani’s house had been stolen, say Cops

Pooja Bhatt: For me, gender problem began when I became a star