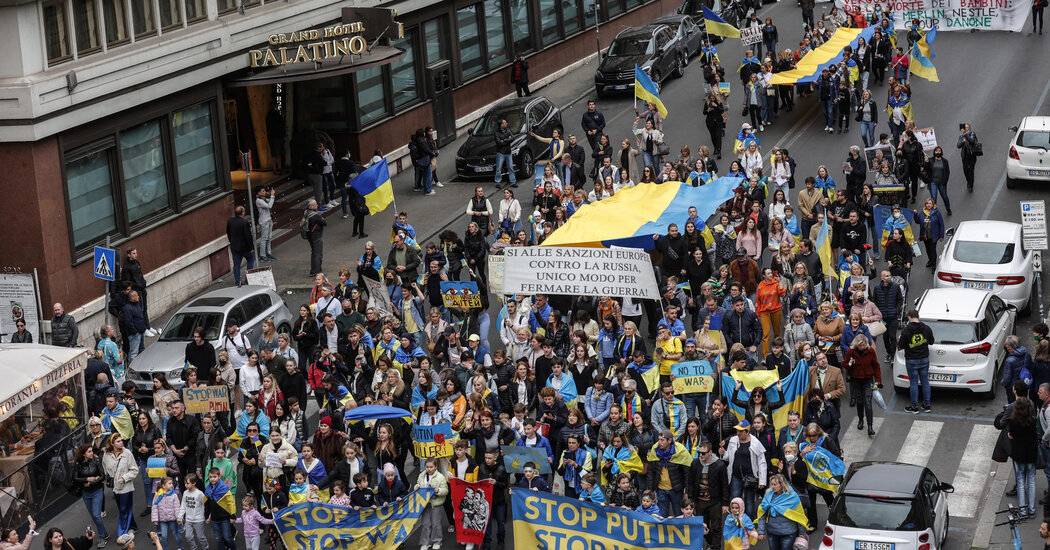 Italy already had the biggest Ukrainian community in Western Europe before the war, but in recent months the diaspora has taken on new prominence and visibility.

PADOVA, Italy — The Ukrainian gymnastics star leaped and pirouetted across the floor of a sports hall in northern Italy to the rhythm of a popular Ukrainian war song, as dozens of young Italian girls in chignons watched in awe.

Evelina Toffoletti, a gymnastics coach who had accompanied her students to the master class, a fund-raiser for Ukraine, joined the thunderous applause.

“We did not know there was this technical primacy in Ukrainian gymnastics,” she said. “Now we see it.” She added, “They are here.”

Italy had the largest Ukrainian community in Western Europe even before the war, but the Russian invasion ordered by President Vladimir V. Putin, and the fierce Ukrainian resistance have turned the spotlight on the country and led to the emergence of a stronger Ukrainian expatriate community and a national identity that had been invisible to many.

“Our people were rediscovered,” said Olena Samoylenko, the organizer of the gymnastics master class, who was born in Ukraine but has lived in Italy for the past 22 years.

The war has brought global attention to Ukraine’s often little-known history, politics, culture and even pop music, but in Italy, many Ukrainians said the war also changed their relationship to their roots, and sometimes, to the country they live in.

Some Ukrainians said that in the past, they often found themselves explaining to Italians that they were not Russians, or that they were not Muslim. Now, Milanese gather to watch documentaries about Ukrainian independence heroes, waiters serve zucchini flowers to Romans at a restaurant whose walls are decorated with the paintings of a Ukrainian artist, and even a small village in the Ligurian Alps resonates with the music of a Ukrainian violinist.

As Ukrainians in Italy fought back worries, a sense of powerlessness and sometimes of guilt, the patriotism that has bolstered the fighting spirit in Ukraine was spilling over into the country’s diaspora, bringing a sense of pride to many here and a desire to engage with charities and other groups that aid Ukrainians in Italy and back home.

“Now I realized that there are many Ukrainians,” said Marina Sorina, who has been living in the northern Italian city of Verona, for 27 years and has been relentlessly organizing in her community since the war began. “People who had put aside their Ukrainian identity stepped up.”

Her Ukrainian association, Ukrainian Mallows, has tripled its membership since the war started. For the first time the community has its own Ukrainian Orthodox parish church, with a refugee priest, in the crypt of a Catholic church by the city’s Roman arena.

For those who, like Ms. Sorina, have always proudly embraced their roots, the war has strengthened their national allegiance and made it more vocal. For others, it brought a new awareness.

“If there is something I learned from this situation it is to be proud of my origins,” said Antonina Bekysh, 18, who was born in Italy to Ukrainian parents. “Unfortunately it took me this period to realize that.”

Ms. Bekysh, who also lives in Verona, said that previously she would say that she was of Ukrainian origin to only close friends or when it was essential, but was reluctant to disclose her roots in large groups or with people she did not know.

“It was this fear of being judged,” she said. “Ukrainians were seen as someone from a lower class.”

Ukrainians began moving to Italy in the late 1990s to escape post-Soviet unemployment and inflation, but the influx increased steeply in the 2000s following regularization programs in Italy that legalized migrant workers, helping to meet the growing demand for personal care workers in that country’s aging society. Since the war began in late February, Italy has welcomed 150,000 Ukrainian refugees, many joining relatives who already lived there.

Even before the invasion, most of the 230,000 Ukrainians in Italy were women; though more educated than the average immigrant from outside the European Union, most work with families, caring for older people and children, according to Italy’s labor ministry.

Ms. Bekysh’s grandmother came to Italy to work as a caregiver in the 1990s because her husband was sick and they needed money. A few years later, Ms. Bekysh’s parents moved here to build a better future. Her father started working as a salesman in a shop, then opened his own business selling food products from Eastern Europe.

Unlike her parents, Ms. Bekysh speaks in a northern Italian accent with no trace of Ukrainian inflection, which, when she feared being stereotyped, allowed her to avoid mentioning of her foreign roots. “It felt like they would see me in a different manner,” she said of non-Ukrainians.

The war, and Ukraine’s resistance, did away with any hesitancy. She started organizing, volunteering, speaking to crowds and to reporters, the colors of Ukraine wrapped around her neck. “Didn’t really plan on becoming an antiwar activist, but here we are,” reads her Instagram bio, followed by a gold and blue flag.

Serena Parekh, a professor of philosophy at Northeastern University in Boston, saw the dynamic Ms. Bekysh described as part of a wider pattern. While Ukrainians have been spared from much of the racism and discrimination Black migrants endure in Europe, she said they face many stereotypes that other economic migrants are subjected to.

“Whiteness is a social construct,” she said. “It means a social privileged group. There’s a way in which Ukrainians were kind of on the outside of that.”

The war, she said, changed that. “Many around the world started to admire the courage of Ukrainians who stayed and fought. This in a way changed people’s perception of them from outsiders to Europe to ‘one of us.’”

Ms. Samoylenko said she had always prided herself of being a Ukrainian “success story,” with her own gymnastics club and job as an instructor. She had invited Ukrainian gymnasts to give lessons in Italy even before the war, but now interest has grown, she said, and the perspective has generally shifted.

“Now when you say Ukrainian, one does not necessarily think ‘caregiver,’ but of a people who are defending themselves with their own hands,” she said. “The image has changed.”

Maryna Shutyuk, 25, who was born in Ukraine but has lived in Italy for more than 10 years, feels a stronger desire to exhibit her national pride. Now, she finds herself wearing her embroidered Ukrainian shirts at her family’s hotel, where she works as a receptionist. Before the war, she would do so only rarely, usually, for religious holidays she celebrated with other Ukrainians.

The shirts, she said, are “starting to become fashionable.”

Ms. Shutyuk also joined the Ukrainian association in Verona set up by Ms. Sorina, who said the increase in the Ukrainian population was contributing to a growing number of cultural centers, services and events focused on that community.

Perceptions from those outside the Ukrainian community are also changing, she said.

“Before when you said you were Ukrainian they would tell you, ‘My grandma’s helper is also Ukrainian,’” Ms. Sorina said. “Now they look at you with respect.”

Thing will soon be taken 'seriously': Govt asks Bengal to deliver report on ...