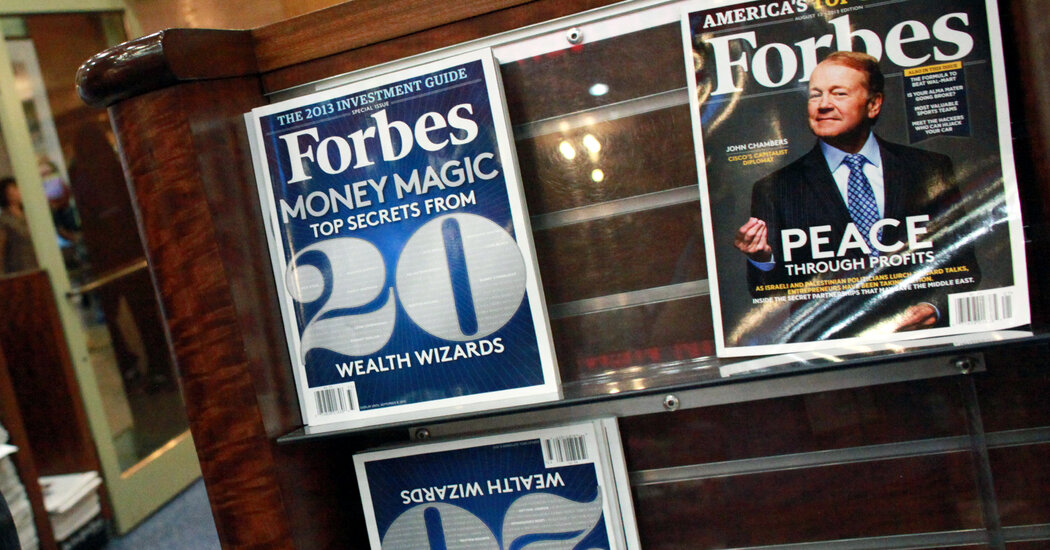 Forbes, the chronicler of the wealthy and powerful, said it has tapped the investment bank Citigroup to explore a sale of its business after a previous deal to go public fell through.

In recent weeks, an offering document describing Forbes’s financials compiled by Citi has been circulated to companies in the media sector, including Yahoo, said three of the people, who would speak only anonymously because the outreach was private. According to the document, Forbes generated more than $200 million in revenue and more than $40 million in profit in 2021, two of the people said.

The New York Times earlier reported Tuesday that Forbes was exploring a sale.

The people said that Forbes was exploring a sale at a price of at least the $630 million valuation that it declared when it moved to go public through the special-purpose acquisition company, or SPAC — though it cannot be assured it will get that price. Forbes scrapped that plan this year.

Yahoo owns Yahoo Finance, a popular online destination for financial news and information, and was sold to the private equity firm Apollo for $5 billion last year. It has since been focused on building out its many products, which include Yahoo Mail and Yahoo Sports.

Forbes called off its deal to go public through a SPAC in May, amid cooling investor appetite for the once-popular financial instrument.

Founded as a magazine in 1917, Forbes is known for its rankings of wealthy businesspeople. Last year, Forbes said it reached more than 150 million people with its journalism, events and marketing programs. The Forbes family sold a majority stake in the company to Integrated Whale Media Investments in 2014.

Forbes still publishes a print edition eight times a year in the United States, and it has 45 licensed local versions that cover 76 countries.