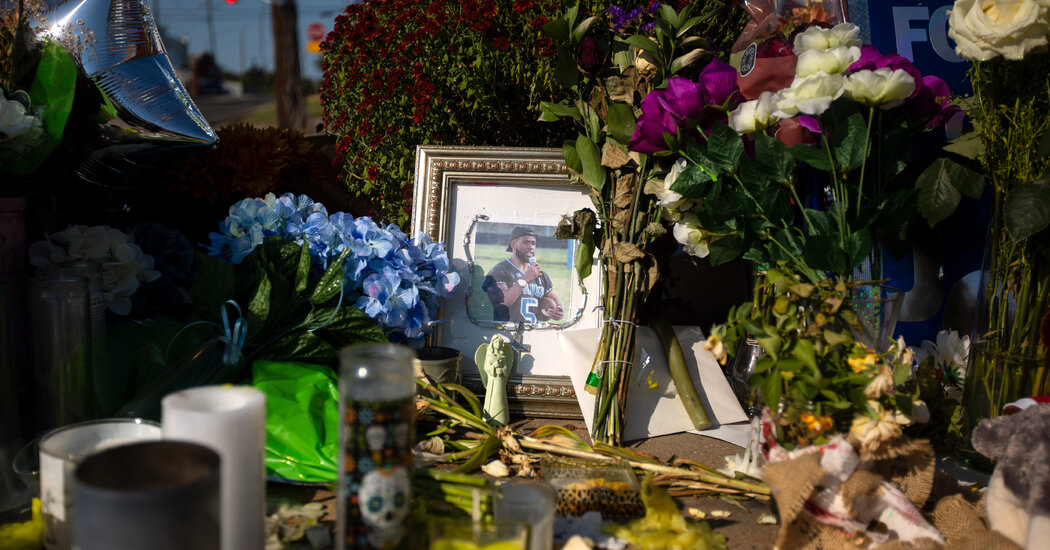 Officer Shaun Lucas, who is white, shot 31-year-old Jonathan Price four times. After the encounter, he was fired.

A white police officer who shot and killed a 31-year-old Black man in Texas two years ago and whose response was deemed “not objectively reasonable” by a preliminary investigation was acquitted of murder by a jury on Thursday.

The officer, Shaun Lucas, shot the man, Jonathan Price, four times in the torso on Oct. 3, 2020, after responding to reports of a fight at a gas station in Wolfe City, a small town northeast of Dallas. Mr. Price had tried to break up the quarrel, his lawyer said.

The officer arrived after the fight and tried to detain Mr. Price after he came to believe Mr. Price might have been involved in the altercation, according to the authorities. When Mr. Price told the officer he would not be detained, Mr. Lucas tried to use a Taser on Mr. Price, who reached out and grabbed the Taser, according to an initial affidavit. Mr. Price’s lawyer said he was only extending his hand.

Mr. Lucas then pulled out his gun and shot him, the affidavit said. Mr. Price died shortly after being taken to Hunt Regional Hospital. He had not been armed.

The Wolfe City Police Department, which employed three officers, immediately put Mr. Lucas on administrative leave and then fired him. The Texas Rangers, a state law enforcement unit that investigates shootings involving officers, arrested him two days later for actions they condemned in their initial investigation.

Mr. Price had “resisted in a nonthreatening posture and began walking away,” the Texas Rangers said about the confrontation.

Mr. Price’s death followed a string of deaths in 2020 in which white police officers killed Black people, including George Floyd and Breonna Taylor, whose names became synonymous with the protests over social justice that swept the country and increased consciousness about institutional racism.

“Shaun Lucas was acquitted in rural Hunt County Texas by an all white jury,” Mr. Merritt added on Twitter. “Every law enforcement professional that reviewed the facts concluded Lucas’ use of force was unjustified.”

Mr. Lucas’s lawyers, Robert Rogers and Toby Shook, could not be reached for immediate comment. In a 2020 statement, Mr. Rogers said Mr. Price “did not claim to be an uninvolved, innocent party” before Mr. Lucas tried to detain him.

Mr. Rogers and Mr. Shook also represented Amber Guyger, a Dallas police officer, in the trial in which she was convicted of murdering her neighbor Botham Jean in 2018 after accidentally entering his apartment, mistaking him for an intruder and shooting him. She was sentenced to 10 years in prison.

Footage taken from Mr. Lucas’s body camera was played in court but not released to the public, and the courtroom did not allow any video recording to take place.

Mr. Lucas, now 24, spent the past two years in jail and was released after the jury issued its verdict.

Mr. Merritt, who ran and lost in the Democratic primary election for Texas attorney general last year, said he was appealing to the Justice Department to intervene and bring federal criminal charges against Mr. Lucas.

The fatal shooting in Wolfe City once again strained race relations in Hunt County, where deep-seated tensions go back decades. One city, Greenville, is still associated with its old official town slogan, “The Blackest Land, the Whitest People,” which hung on a banner over the main road from 1921 to the 1960s, when city officials changed it during the civil rights movement. Another city, Quinlan, was considered the headquarters for the Texas Rebel Knights of the Ku Klux Klan as recently as 2017, according to the Southern Poverty Law Center.

In 2019, a year before the shooting of Mr. Price, more than 80 people in Wolfe City received racist and antisemitic fliers on their driveways. The perpetrators were never caught, and an investigation into the incident by the Hunt County sheriff was dropped.

Delhi Police pays tribute to the martyrs on Memorial Day

Covid Symptoms Can Rebound Even If You Don’t Take Paxlovid