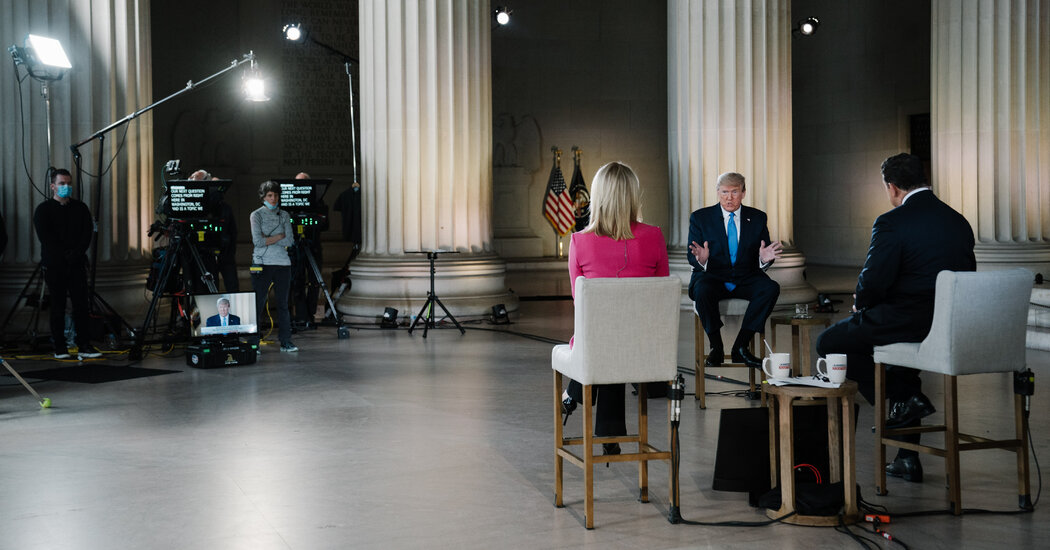 The former president hasn’t been interviewed on the Rupert Murdoch-owned cable network in more than 100 days, and other Republicans often get the attention he once did.

It’s been more than 100 days since Donald J. Trump was interviewed on Fox News.

The network, which is owned by Rupert Murdoch and boosted Mr. Trump’s ascension from real estate developer and reality television star to the White House, is now often bypassing him in favor of showcasing other Republicans.

In the former president’s view, according to two people who have spoken to him recently, Fox’s ignoring him is an affront far worse than running stories and commentary that he has complained are “too negative.” The network is effectively displacing him from his favorite spot: the center of the news cycle.

On July 22, as Mr. Trump was rallying supporters in Arizona and teasing the possibility of running for president in 2024, saying “We may have to do it again,” Fox News chose not to show the event — the same approach it has taken for nearly all of his rallies this year. Instead, the network aired Laura Ingraham’s interview with a possible rival for the 2024 Republican nomination, Gov. Ron DeSantis of Florida. It was the first of two prime-time interviews Fox aired with Mr. DeSantis in the span of five days; he appeared on Tucker Carlson’s show shortly after talking to Ms. Ingraham.

When Mr. Trump spoke to a gathering of conservatives in Washington this week, Fox did not air the speech live. It instead showed a few clips after he was done speaking. That same day, it did broadcast live — for 17 minutes — a speech by former Vice President Mike Pence.

Mr. Trump has complained recently to aides that even Sean Hannity, his friend of 20 years, doesn’t seem to be paying him much attention anymore, one person who spoke to him recalled.

The snubs are not coincidental, according to several people close to Mr. Murdoch’s Fox Corporation who spoke on the condition of anonymity to discuss the company’s operations. This month, The New York Post and The Wall Street Journal, both owned by Mr. Murdoch, published blistering editorials about Mr. Trump’s actions concerning the Jan. 6, 2021, riot on the Capitol.

The skepticism toward the former president extends to the highest levels of the company, according to two people with knowledge of the thinking of Mr. Murdoch, the chairman, and his son Lachlan, the chief executive. It also reflects concerns that Republicans in Washington, like Senator Mitch McConnell of Kentucky, the minority leader, have expressed to the Murdochs about the potential harm Mr. Trump could cause to the party’s chances in upcoming elections, especially its odds of taking control of the Senate.

The Murdochs’ discomfort with Mr. Trump stems from his refusal to accept his election loss, according to two people familiar with those conversations, and is generally in sync with the views of Republicans, like Mr. McConnell, who mostly supported the former president but long ago said the election was settled and condemned his efforts to overturn it.

One person familiar with the Murdochs’ thinking said they remained insistent that Fox News had made the right call when its decision desk projected that Joseph R. Biden would win Arizona just after 11 p.m. on the night of the election — a move that infuriated Mr. Trump and short-circuited his attempt to prematurely declare victory. This person said Lachlan Murdoch had privately described the decision desk’s call, which came days before other networks concluded that Mr. Trump had lost the state, as something only Fox “had the courage and science to do.”

The former president remains a potent force in Republican politics.

Some of the people acknowledged that Fox’s current approach to Mr. Trump could be temporary. If Mr. Trump announces he is running for president, or if he is indicted, he will warrant more coverage, they said.

The relationship between Mr. Trump and the Murdoch media empire has long been complicated — an arrangement of mutual convenience and mistrust that has had sensational ups and downs since Mr. Trump first talked himself onto the gossip pages of The New York Post in the 1980s.

But the spat between the former president and the media baron who has helped set the Republican Party’s agenda for decades is occurring in a much larger and more fragmented media landscape, as new personalities and platforms make it much harder for any one outlet to change the narrative. Mr. Trump’s allies in the corners of the conservative media that are more loyal to him — including Breitbart, Newsmax and talk radio — are already seizing on the turn inside Fox as evidence of a betrayal.

Mr. Trump appears willing to fight. He blasted “Fox & Friends” this week on his social media service, Truth Social, for being “terrible” and having “gone to the ‘dark side’” after one of its hosts had mentioned that Mr. DeSantis had beat Mr. Trump in two recent polls of a hypothetical 2024 Republican primary contest. Then, offering no evidence, he blamed Paul Ryan, the former Republican speaker of the House, with whom he often clashed. Mr. Ryan sits on the Fox Corporation’s board of directors.

The Post was often on Mr. Trump’s side in its editorials when he was president. But it occasionally went against him, like when Mr. Trump refused to concede the election in 2020 and the paper’s front-page headline blared: “Mr. President, STOP THE INSANITY.”

Mr. Trump found a home on Fox News when the network’s founder, Roger Ailes, gave him a weekly slot on “Fox & Friends” in 2011. Mr. Trump used the platform to connect with the budding Tea Party movement as he thrashed establishment Republicans like Mr. Ryan and spread a lie about the authenticity of President Barack Obama’s birth certificate.

Initially, neither Mr. Ailes nor Mr. Murdoch thought of Mr. Trump as a serious presidential candidate. Mr. Ailes told colleagues at the time that he thought Mr. Trump was using his 2016 campaign to get a better deal with NBC, which broadcast “The Apprentice,” according to “Insurgency,” this reporter’s account of Mr. Trump’s rise in the G.O.P. And, when Ivanka Trump told Mr. Murdoch over lunch in 2015 that her father intended to run, Mr. Murdoch reportedly did not even look up from his soup, according to “The Devil’s Bargain,” by Joshua Green.

But as Mr. Trump became bigger than any one news outlet — and bigger than even his own political party — he was able to turn the tables and rally his supporters against Fox or any other outlet he felt was too critical of him. He regularly used Twitter to attack Fox personalities like Megyn Kelly, Charles Krauthammer and Karl Rove.

The network could always be critical of him in its news coverage. But now the skepticism comes through louder — in asides from news anchors, in interviews with voters or in opinion articles for other Murdoch-owned properties.

Referring to the congressional investigation into the Jan. 6 attack, the Fox anchor Bret Baier said it had made Mr. Trump “look horrific” by detailing how it had taken 187 minutes for him to be persuaded to say anything publicly about the riot. One recent segment on FoxNews.com featured interviews with Trump supporters who were overwhelmingly unenthusiastic about a possible third campaign, saying that they thought “his time has passed” and that he was “a little too polarizing.” Then they offered their thoughts on who should replace him on the ticket. Unanimously, they named Mr. DeSantis.

“I spent 11 years at Fox, and I know nothing pretaped hits a Fox screen that hasn’t been signed off on and sanctioned at the very top levels of management,” said Eric Bolling, a former Fox host who is now with Newsmax. “Especially when it has to do with a presidential election.”

There can be no denying that Fox News remains Fox News. Viewers in recent weeks have seen occasionally critical coverage of Mr. Trump, but, unlike other news networks, Fox has chosen to air its own prime-time programming rather than the hearings of the committee investigating the Jan. 6 attack. (The writer of this article is an MSNBC contributor.) Mr. Carlson, Mr. Hannity and Ms. Ingraham dismiss the hearings as a “show trial.”

“They are lying, and we are not going to help them do it,” Mr. Carlson has said. “What we will do instead is to try to tell you the truth.”

The network has aired the Jan. 6 committee hearings during the day, when far fewer viewers are tuning in. But other segments during the daytime and early evening play up violent crime in Democratic-run cities or Mr. Biden’s verbal and physical stumbles. As the government announced that a key indicator of economic health declined last quarter, the headline Fox scrawled across the screen read, “Biden Denies Recession as U.S. Enters Recession.”

On April 13, Mr. Trump called into Mr. Hannity’s show and ran through a list of crises he claimed would not be happening “had we won this election, which we did.”

He hasn’t been interviewed on the network since.

‘Some people don’t want Sidharth Shukla and Shehnaaz Gill to be together,’ says Vindu...

Kris Jenner shares she reaches out to daughter Kim Kardashian when stuck in crisis,...