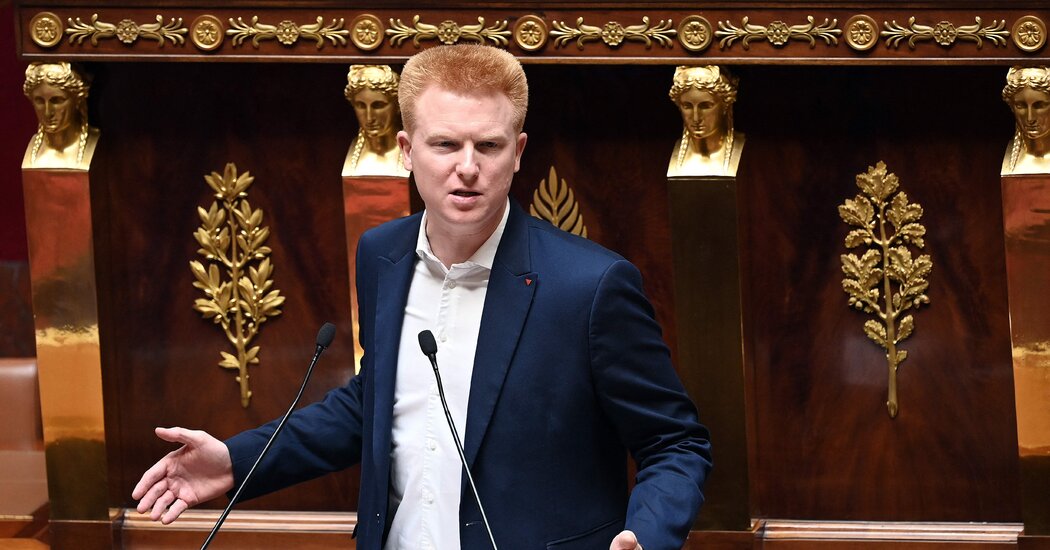 Jean-Luc Mélenchon, the leader of the leftist France Unbowed party, expressed “trust” and “affection” for Adrien Quatennens, setting off a firestorm.

PARIS — Outrage grew in France this week after a prominent French leftist defended a lawmaker who admitted to slapping his wife, adding fuel to arguments that the left has fumbled or ignored cases where prominent men in their ranks are accused of harming or harassing women.

The lawmaker, Adrien Quatennens, 32, a rising star in La France Insoumise, or France Unbowed, said in a statement on Sunday that he had slapped his wife, Céline Quatennens, during an argument a year ago, “in a context of extreme tension and mutual hostility.”

Mr. Quatennens apologized and said he was stepping down from his role as a top coordinator of France Unbowed, the dominant force in an alliance of opposition left-wing parties in the National Assembly, France’s lower house of Parliament.

But Jean-Luc Mélenchon, who was France Unbowed’s presidential candidate in this year’s election and still holds considerable sway over the party, expressed support for Mr. Quatennens and, initially at least, little sympathy for Ms. Quatennens — adding to accusations that Mr. Mélenchon was sorely disconnected from the feminist causes that his party says it defends.

Parties across the spectrum in France have faced a growing uproar over sexist and sexually violent behavior by politicians. One of President Emmanuel Macron’s ministers left his cabinet in July after he was accused of rape, and a prominent Green politician was temporarily suspended on Wednesday night as a president of his party’s lawmakers in the National Assembly after accusations against him resurfaced this week.

“It shows we still have a long way to work to have truly feminist parties,” said Fiona Texeire, a founder of the Observatory of Sexual and Sexist Violence in Politics. Referring specifically to France Unbowed, she added, “They claimed to be up-to-date on the issue during their campaign, but then they showed the complete opposite.”

In the newspaper Libération, more than 500 feminist and left-wing activists wrote in an open letter on Tuesday that “when a political group has a feminist agenda, we have the right to expect them to stop protecting abusers,” and they urged Mr. Quatennens to step down from Parliament. On Wednesday, the newspaper’s main front-page headline referred to the developments as “Le Grand Malaise” in French politics.

Mr. Quatennens’s statement on Sunday came after reports last week in the French news media that his wife had filed a domestic violence report with the police. In his statement, Mr. Quatennens recounted two other physical altercations over recent months after Ms. Quatennens told him she wanted a divorce: one where he grabbed her wrist and another where she hurt her elbow as she was trying to recover a cellphone he took from her.

His announcement exposed growing cracks in the French left, especially within France Unbowed, a movement that has made feminist causes a cornerstone of its platform but has struggled to handle accusations of sexism or sexist violence against its members — prompting allegations of double standards.

Some feminists were particularly incensed by Mr. Mélenchon, a firebrand politician and three-time failed presidential candidate. He expressed “trust” and “affection” for Mr. Quatennens in a post on Twitter and said that “police malevolence, media voyeurism, and social networks” had interfered in the divorce.

A skilled orator, Mr. Quatennens was one of his party’s most recognizable faces — a disciplined politician who toed Mr. Mélenchon’s line and was widely seen as his protégé and heir apparent.

“Adrien decided to take it all on himself,” Mr. Mélenchon said in his post. “I salute his dignity and his courage.”

Hours later, after a barrage of online criticism that his message expressed support for a perpetrator of domestic violence but none for the victim, he tweeted: “Céline and Adrien are both my friends. My affection for him does not mean that I am indifferent to Céline,” adding that a slap was “unacceptable in any case.”

Critics were not swayed. “It seems the closer you are to the party leader, the more untouchable you are,” Ms. Texeire said.

Raphaëlle Rémy-Leleu, a Green party city councilor in Paris and a feminist activist who talks openly about having survived a near-fatal attack by an former boyfriend, said Mr. Quatennens’s admission of domestic violence and the political reaction to it laid bare how little had changed in France when it came to gender-based violence.

Instead of outrage, there was a quick acceptance of his repentance, and a depiction of Mr. Quatennens as a sad, upset man who struck out at his wife because she was leaving him, Ms. Rémy-Leleu said.

“It’s a classic masculine way of framing gender violence,” she said, adding that “the public voice of the victim disappeared.”

“He’s saying, ‘I understand what I did prevents me being political leader in my party.’ But he doesn’t think it prevents him being a leader of the nation,” Ms. Rémy-Leleu added. “This is crazy.”

France Unbowed tried to shift focus on Sunday with its own statement, which insisted on the party’s “unwavering commitment in the fight against violence against women.” But Mr. Quatennens’s case was the third time in less than a year that the party had come under intense criticism for its handling of accusations against male politicians.

In May, Taha Bouhafs, a journalist who was running for Parliament with the party’s support, dropped out of the race after a former partner accused him of sexual assault. France Unbowed handled the case opaquely, initially obfuscating the reason for his departure. The accusations against him are still unclear.

In July, Éric Coquerel, a France Unbowed lawmaker who presides over the financial affairs committee, was accused of inappropriate sexual behavior. Prosecutors have opened an investigation, but Mr. Coquerel, who has denied any wrongdoing, received Mr. Mélenchon’s support and remains in position.

Unease was palpable on Tuesday at a news conference held by France Unbowed lawmakers — many of them women who are outspoken feminists but also close allies of Mr. Mélenchon’s.

“We are trying to put mechanisms in place; it isn’t perfect,” said Clémentine Autain, a France Unbowed lawmaker.

France Unbowed is not the only party on the left struggling with such accusations. A member of the Greens, Sandrine Rousseau, accused the leader of her party of mistreating a former partner, allegations that had been reported over the summer in the newspaper Le Figaro but had gone largely unnoticed.

When Ms. Rousseau was asked about the accusations on Monday on France 5 television, she said that she had met with the former partner of that leader — Julien Bayou, the party’s national secretary — and that he appeared to have acted in a way that could “break the mental health of women.”

Ms. Rousseau said the former partner was “very depressed” and had attempted suicide, but she did not elaborate. Mr. Bayou had denied any wrongdoing in July and suggested that his accuser was motivated by revenge after a difficult breakup. The party has opened an investigation into the accusations, and announced on Tuesday night that Mr. Bayou was temporarily suspended as a president of the party’s lawmakers in the National Assembly.

In his statement, Mr. Quatennens said that there was no excuse for his behavior, which included sending “too many messages” to his wife in an effort to persuade her not to divorce him. But he also insisted that the physical altercations with Ms. Quatennens did not accurately reflect their 13-year relationship.

“I hate violence in general, and especially against women,” he said.

Mr. Quatennens did not respond to requests for comment.

One of the strongest reactions came from within France Unbowed itself.

Pascale Martin, a sociologist who was elected this year as one of the party’s lawmakers, said in a scathing statement on Monday that the reactions of Mr. Mélenchon and others expressing support for Mr. Quatennens were “all the more unacceptable that we are part of a political movement that has placed the fight against sexist and sexual violence at the heart of our platform.”

Victims could be discouraged from coming forward, Ms. Martin said, adding, “I will always be on the side of victims of violence, and never that of abusers.”

India ramps up combat Covid: 100 hospitals to own very own air plant, import...

Shraddha Kapoor was unwell, couldn’t train for 12 hours: Amole Gupte on her quitting...