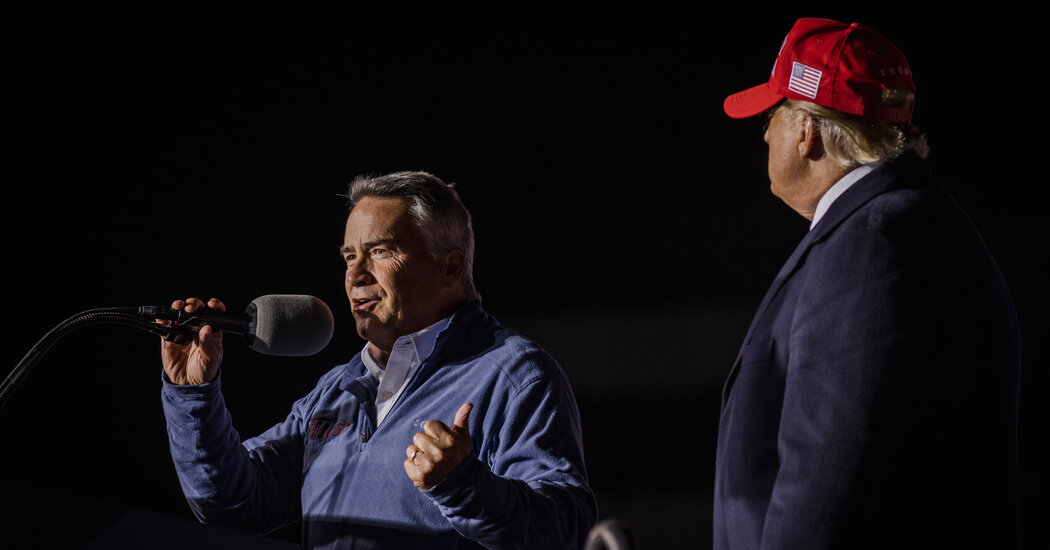 Representative Jody Hice has been one of the most vocal proponents of false claims that Donald J. Trump won the 2020 presidential election.

ATLANTA — Representative Jody Hice revealed on Monday that he had been subpoenaed in an ongoing criminal investigation by prosecutors in Georgia into election interference by Donald J. Trump and his allies.

It is unclear what kind of information prosecutors are seeking, but Mr. Hice, a Republican, has been one of the most conspicuous proponents of false claims that Mr. Trump was the winner of the 2020 presidential election.

Mr. Hice, whose district is east of Atlanta, is seeking to challenge the subpoena in federal court, arguing in a new legal filing that his status as a congressman gives him special protections from state proceedings. He has been a stalwart ally of Mr. Trump and led a January 2021 challenge in the House of Representatives to the certification of Georgia’s electors. Earlier this year, he lost a Trump-backed primary challenge to Georgia’s secretary of state, Brad Raffensperger, who has had a fractious relationship with the former president.

The subpoena, included in the court filing, demands Mr. Hice’s presence on Tuesday morning at 9 a.m. before the special grand jury in a downtown Atlanta courtroom.

Loree Anne Paradise, a lawyer for Mr. Hice, could not be reached for comment on Monday.

Earlier this month, Senator Lindsey Graham of South Carolina, who has also been subpoenaed in the inquiry, went to federal court to try to shield himself from testifying.

The former president remains a potent force in Republican politics.

The investigation is being led by Fani T. Willis, the district attorney of Fulton County, which encompasses most of Atlanta, and has already entangled a number of Mr. Trump’s allies. Several members of the legal team that worked with the 2020 Trump campaign have received subpoenas, including Rudolph W. Giuliani, John Eastman, Cleta Mitchell and Jenna Ellis.

David Shafer, a Trump ally who chairs the state Republican Party, has been sent a letter informing him that he is a target of the inquiry and could be indicted, as have two state lawmakers. The special grand jury is looking into a range of potentially criminal acts, including the selection of a slate of pro-Trump electors in the weeks after the election and Mr. Trump’s now-famous call to Mr. Raffensperger asking him to “find” nearly 12,000 votes that would reverse his loss there.

Mr. Hice helped lead efforts in Congress to keep Mr. Trump in power. On Dec. 21, 2020, Mr. Hice posted on Twitter about meetings that he and other pro-Trump lawmakers had that day with Mr. Trump, Vice President Mike Pence and Mr. Trump’s legal team. “I will lead an objection to Georgia’s electors on Jan 6,” Mr. Hice wrote. “The courts refuse to hear the President’s legal case. We’re going to make sure the People can!”

Mr. Hice is a preacher, former radio talk show host and former vice president of the Georgia Baptist Convention. He has written that the separation of church and state is an “erroneous idea,” and he made controversial statements about women and gay and lesbian people.

Mr. Hice’s lawyer is seeking to have the matter of the subpoena fought in federal court, citing federal law that allows for members of Congress and other officials to move legal entanglements at the state level to the federal courts.

Mr. Graham’s lawyers are already challenging his subpoena in federal court in Washington. They have argued that the Speech and Debate clause of the United States Constitution protects members of Congress from participating in such inquiries, though it generally does not shield political activities. Mr. Graham called Mr. Raffensperger on two occasions in November 2020 to inquire about invalidating certain mail-in ballots to aid Mr. Trump.

Ms. Willis is also weighing whether to subpoena Mr. Trump in her investigation, and has said that “anything that is relevant to attempts to interfere with the Georgia election will be subject to review.”

Veteran US broadcaster Larry King in hospital with COVID

SSB personnel absconded from Budgam in Jammu and Kashmir