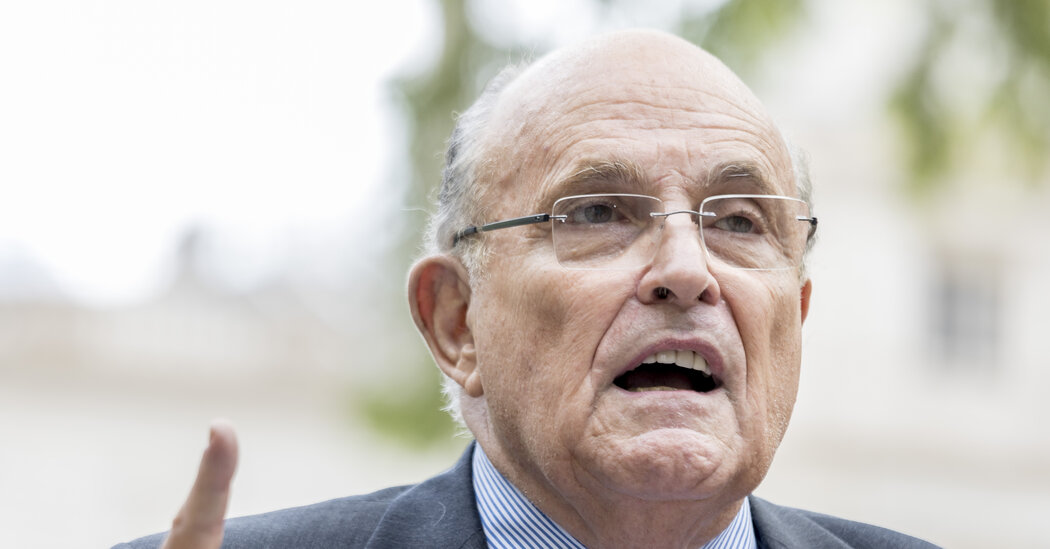 ATLANTA — The legal pressures on Donald J. Trump and his closest allies intensified further on Monday, as prosecutors informed his former personal attorney, Rudolph W. Giuliani, that Mr. Giuliani is a target of a wide-ranging criminal investigation into election interference in Georgia.

The notification came on the same day that a federal judge rejected efforts by another key Trump ally, Senator Lindsey Graham, to avoid giving testimony before the special grand jury hearing evidence in the case in Atlanta.

One of Mr. Giuliani’s lawyers, Robert Costello, said in an interview that he was notified on Monday that his client was a target. Being so identified does not guarantee that a person will be indicted; rather, it usually means that prosecutors believe an indictment is possible, based on evidence they have seen up to that point.

Mr. Giuliani, who as Mr. Trump’s personal lawyer spearheaded efforts to keep Mr. Trump in power, emerged in recent weeks as a central figure in the inquiry being conducted by Fani T. Willis, the district attorney of Fulton County, Ga., which encompasses most of Atlanta.

For Mr. Giuliani, the former mayor of New York, the developments are the latest in a widening swath of trouble, though he got some good news recently when it emerged that he was unlikely to face charges in a federal criminal inquiry into his ties to Ukraine during the 2020 presidential campaign.

Mr. Giuliani is scheduled to appear before the special grand jury on Wednesday at a downtown Atlanta courthouse. His lawyer, Mr. Costello, said in the interview that Mr. Giuliani would probably invoke attorney-client privilege if asked questions about his dealings with Mr. Trump. “If these people think he’s going to talk about conversations between him and President Trump, they’re delusional,” Mr. Costello said.

The rejection of Senator Graham’s effort to avoid testifying came in a written order from a Federal District Court judge in Atlanta, Leigh Martin May. Mr. Graham, a Republican of South Carolina, is now set to testify on Aug. 23.

The judge found that prosecutors had shown that there is “a special need for Mr. Graham’s testimony on issues relating to alleged attempts to influence or disrupt the lawful administration of Georgia’s 2022 elections.”

Lawyers for Mr. Graham have said that he was informed by prosecutors that he was a witness, not a target.

Who is under scrutiny? With the help of a special grand jury, Ms. Willis has subpoenaed several of Mr. Trump’s allies, including Rudolph W. Giuliani, who has been told that he is a target of the investigation. Mr. Giuliani spearheaded efforts to keep Mr. Trump in power as his personal lawyer.

Prosecutors want his testimony for a number of reasons. Among them are two phone calls that Mr. Graham placed just after the 2020 election to Brad Raffensperger, the Georgia secretary of state, in which Mr. Graham inquired about ways to help Mr. Trump by invalidating certain mail-in votes.

Mr. Giuliani’s postelection activities on Mr. Trump’s behalf have created problems for him on a number of fronts. The House committee in Washington investigating the Jan. 6 attack on the Capitol has highlighted video footage of Mr. Giuliani’s activities in Georgia, and the scheme to create rival slates of presidential electors is also the subject of an intensifying investigation by the Department of Justice. Mr. Giuliani is among the subjects of civil suits by two makers of voting machines, Dominion and Smartmatic, that seek billions of dollars in damages.

Much of Mr. Giuliani’s conduct in Georgia was laid out last year by the New York State appellate court that suspended his law license. The court issued a 33-page report that mentioned Georgia 35 times and described “numerous false and misleading statements regarding the Georgia presidential election results” made by Mr. Giuliani. The court noted, for instance, that Mr. Giuliani had falsely claimed that tens of thousands of underage teenagers had voted illegally in Georgia, even though an audit by Georgia’s secretary of state found that no one under the age of 18 had voted in the 2020 election.

Mr. Giuliani was also a central figure in the Trump campaign’s plan to urge lawmakers in swing states to appoint different slates of electors than those chosen by voters, which is part of the Georgia inquiry as well as the Justice Department investigation.

A spokesman for the Fulton County district attorney’s office declined to comment on Monday. It is unclear what charges Mr. Giuliani might face, should he be indicted. But in the past, Ms. Willis has said her investigation could result in racketeering or conspiracy charges involving multiple defendants.

Norman Eisen, a lawyer who served as special counsel to the House Judiciary Committee during the first impeachment and trial of Mr. Trump, said he believed that identifying Mr. Giuliani as a target could mean that Mr. Trump will eventually be a target as well.

“There is no way Giuliani is a target of the D.A.’s investigation and Trump does not end up as one,” Mr. Eisen said in an interview Monday. “They are simply too entangled factually and legally in the attempt to use fake electors and other means to overturn the Georgia election results.”

Lawyers for Mr. Giuliani have said that he did nothing improper in Georgia, and that he has been willing to cooperate. But they have been sparring with Ms. Willis’s office over her efforts to get him to testify before the grand jury. Mr. Giuliani’s lawyers have said a doctor recommended that Mr. Giuliani not travel by air because of a procedure he underwent in early July to insert cardiac stents, and they have sought to delay his testimony or have it conducted by video conference, an idea the district attorney’s office has resisted.

Judge Robert C.I. McBurney of Fulton County Superior Court said last week that Mr. Giuliani could travel to Atlanta “on a train, on a bus or Uber,” and set a date for Wednesday, after agreeing to delay his appearance for more than a week. Mr. Giuliani’s lawyers indicated that in any case, their client would have little to say if he was designated as a target of the investigation.

“I think it would be meanspirited to make — as a target, to make him travel down here, particularly by these alternative means, when there likely would not be very much testimony before the grand jury,” another Giuliani attorney, William H. Thomas Jr., said after a court hearing.

At least 17 other people have already been designated as targets who could face charges in the investigation, including two state senators and the head of the state Republican Party.

Lawyers for Mr. Graham had based their argument that he should not be forced to testify on the Constitution’s speech and debate clause, which shields lawmakers from being questioned over things they say that are related to their official duties. Among other things, the lawyers argued that Mr. Graham, as a high-ranking official, could only be called under “extraordinary circumstances.”

Judge May ruled that prosecutors had shown that such extraordinary circumstances exist.

Mr. Graham has argued that his phone calls to Mr. Raffensperger were protected under the speech and debate clause because they were investigatory in nature, and were related to his position, at the time, as chairman of the Judiciary Committee. But the judge, in her order, noted that “individuals on the calls have publicly suggested that Senator Graham was not simply engaged in legislative fact-finding,” and was “seeking to influence Secretary Raffensperger’s actions” to benefit Mr. Trump. (Mr. Raffensperger has said that Mr. Graham seemed to suggest to him that he find a way to discard legally cast ballots.)

Judge May’s ruling essentially left it to the state court to determine which elements of Mr. Graham’s calls should be shielded in accordance with the speech and debate clause.

But she also noted that, beyond the phone calls, there were numerous other items of interest to the special grand jury that were unquestionably fair game, including Mr. Graham’s “potential communications and coordination with the Trump campaign and its postelection efforts in Georgia.”

Prosecutors are demanding that two other lawyers for the Trump team, Jenna Ellis and John Eastman, appear before the special grand jury as well. The participation of Ms. Ellis, a Colorado resident, will be addressed in a court hearing scheduled for Tuesday in Fort Collins, Colo. A similar hearing will be held for Mr. Eastman, a New Mexico resident, at a courthouse in Santa Fe, N.M. on Wednesday.

Mr. Costello, the lawyer for Mr. Giuliani, was asked by a reporter on Monday what means of transportation his client would use as he made his way to Atlanta from New York.

Kamala Harris’ ancestral village in Tamil Nadu beaming with joy before her swearing-in as...