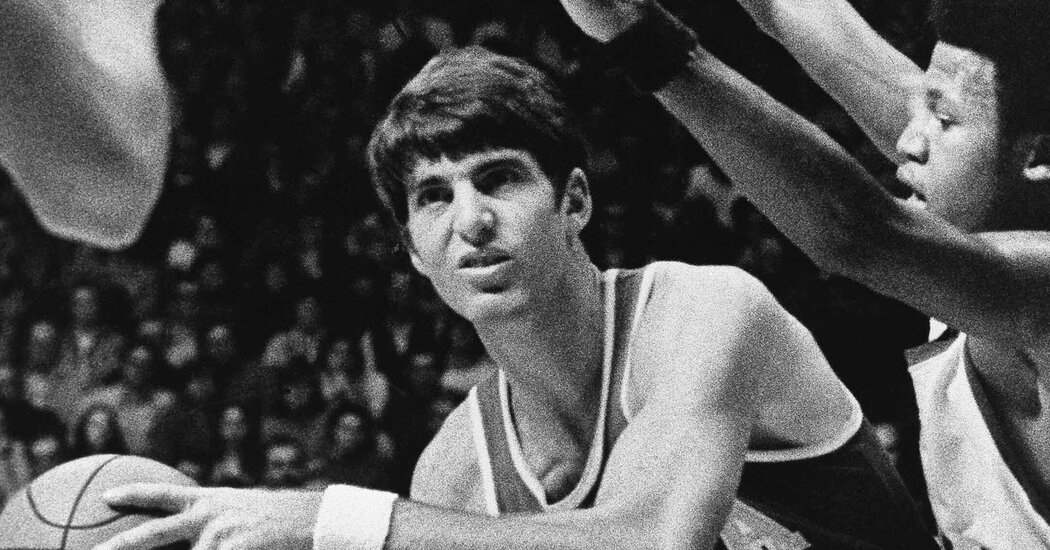 A master of the assist, he played alongside Bill Walton and Jamaal Wilkes on teams that John Wooden led to the N.C.A.A. championship in 1972 and 1973.

Greg Lee, the point guard for Coach John Wooden’s unbeaten U.C.L.A. teams that captured the 1972 and 1973 N.C.A.A. basketball tournament championships, died on Wednesday in San Diego. He was 70.

His death, at a hospital, was announced by the U.C.L.A. athletics department, which said the cause was an infection related to an immune disorder.

At 6 feet 4 inches, a good size for a guard of his era, Lee became a starter in his sophomore season.

He joined center Bill Walton and forward Jamaal Wilkes, U.C.L.A.’s stars, on the Bruins team that defeated Florida State for the 1972 tournament championship.

Concentrating on a playmaking role since U.C.L.A. had a sharpshooting frontcourt, he handed out 14 assists in 34 minutes on the court while Walton connected on 21 of 22 shots, scoring 44 points, in the Bruins’ victory over Memphis State in the 1973 title game for their seventh consecutive national championship. Both those teams went 30-0.

By U.C.L.A’s standards, the 1973-74 season, when Lee was a senior, proved something of a disappointment. The Bruins’ winning streak ended at 88 games when they were edged by Notre Dame, 71-70. They were defeated in double overtime in the N.C.A.A. tournament semifinals by North Carolina State, which went on to capture the title, and they finished with a record of 26-4 — impressive for almost any team, but not U.C.L.A.

Lee averaged only 5.8 points a game for his three varsity seasons, but he averaged nearly three assists a game as a senior. His U.C.LA. teams had an overall record of 86-4.

He was named a three-time academic All-American.

Lee was selected by the Atlanta Hawks in the seventh round of the 1974 N.B.A. draft and by the San Diego Conquistadors of the American Basketball Association in its draft. He played briefly in the A.B.A. and, after becoming a free agent, reunited with Walton on the N.B.A.’s Portland Trail Blazers, who obtained him in a trade with the Hawks. He got into only a few games with the Blazers.

Lee later played pro basketball in Germany for several seasons. But if his basketball career was over when he returned to the United States, his athletic career was not.

He hadn’t played volleyball at U.C.L.A., but he joined the professional beach volleyball circuit in Southern California and went on to enjoy success in both singles and, teamed with Jim Menges, a former volleyball player for the Bruins, doubles. In their 30 matches between 1973 and 1982, Lee and Menges won 25 doubles titles and finished in second place three times and in third place once.

Gregory Scott Lee was born on Dec. 12, 1951, in the Reseda neighborhood of Los Angeles, the youngest of three brothers. He starred in basketball at Reseda High School, where he was coached by his father, Marvin, who had played for U.C.L.A. in the 1940s under Wilbur Johns, the Bruins’ coach before Wooden. He was named the Los Angeles city player of the year during his junior and senior seasons at Reseda, when he averaged close to 30 points a game.

He is survived by his wife, Lisa; his son, Ethan; his daughter, Jessamyn Feves; his brother, Jon; and two grandchildren.

Lee was grateful to Wooden for his guidance.

“He did the same things with his stars as he did with his scrubs,” he was quoted as saying in “How to Be Like Coach Wooden: Life Lessons From Basketball’s Greatest Leader,” by Pat Williams with David Wimbish (2006). “He always focused on the details. He was a teacher who happened to be a basketball coach.”