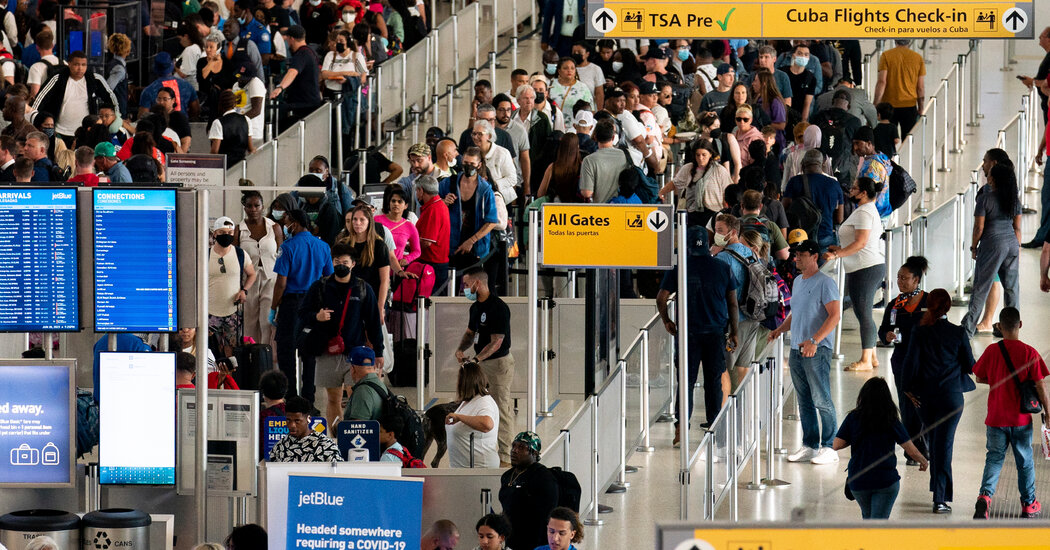 This year, Transportation Security Administration officers have already discovered more than 4,600 guns at airport security checkpoints, and about 87 percent of them were loaded.

WASHINGTON — The Transportation Security Administration is on pace this year to again break the record for the number of guns intercepted at airport security checkpoints, underscoring a persistent challenge for security officials amid brisk gun sales in the United States.

So far this year, T.S.A. officers have already discovered more than 4,600 guns at airport checkpoints, and about 87 percent of them were loaded, according to the agency. Last year, the T.S.A. found nearly 6,000 guns at airport checkpoints, which itself was a record. The number of guns discovered at security checkpoints has been trending upward for more than a decade, with the only decrease coming during the pandemic.

The slew of guns found at the nation’s airports this year have come as air travel in the United States is nearing a return to prepandemic levels. Gun sales in the country have surged in recent years, suggesting that some travelers may be unfamiliar with the rules for carrying firearms while traveling by plane.

“Entering a checkpoint with a firearm, particularly a loaded one, is an expensive mistake,” said Carter Langston, a T.S.A. spokesman.

When a gun is found at a checkpoint, the T.S.A. does not seize it. Instead, agents are instructed to call law enforcement to handle the situation. There is no federal criminal penalty for passengers caught with a gun at a checkpoint, but the T.S.A. can impose a fine of up to about $14,000 and the loss of PreCheck membership — which allows for expedited security screening — for up to five years.

Potential criminal charges, if any, vary by state. In Texas, law enforcement officials often tell travelers to get out of line, lock their guns in their cars and return to try to catch their flights. In New York, however, the discovery of a gun at a checkpoint will most likely end with the passenger in handcuffs.

The severity of any criminal charges can also differ based on whether the person has a permit to carry a concealed weapon. In Florida, for example, someone with a concealed-carry permit stopped at an airport checkpoint can be charged with a second-degree misdemeanor. A passenger without one could face a felony for carrying a concealed weapon.

Guns were discovered at 268 of the country’s airports last year, according to the T.S.A., and the 10 airports with the largest number of them were all in the South or the West. Hartsfield-Jackson Atlanta International Airport led the nation with 507 guns found.

Last year, a gun was accidentally discharged at a checkpoint at the Atlanta airport, causing a panic among travelers. And this spring, Representative Madison Cawthorn, Republican of North Carolina, was briefly detained by the police after trying to bring a loaded gun through airport security in Charlotte — the second time in a little over a year that he had been found with a gun at an airport checkpoint.

While guns cannot be brought onto planes in carry-on baggage, they are allowed to be transported in checked baggage. Those firearms must be unloaded and locked in a hard-sided case.

Aidan Johnston, the director of federal affairs for Gun Owners of America, a gun rights group, said that many passengers found with guns at airport checkpoints were in a stressed state because they were traveling and might not have been thinking about the location of their gun. He suggested that the increase in guns found at checkpoints could be driven in part by first-time gun owners who may not be familiar with the rules of traveling with a firearm.

Mr. Johnston said he did not support states’ punishing travelers for an honest mistake, but he encouraged gun owners to take on the responsibility of educating themselves about the T.S.A.’s requirements.

Shannon Watts, the founder of Moms Demand Action, a gun control group, said the rise in guns found at airports was “the logical result of record gun sales and states weakening gun safety laws with extreme policies like permitless carry, which encourage guns anywhere, for anyone, no questions asked.”

The T.S.A. has tried to do more to keep guns from getting past security checkpoints. In March, the agency announced that it was investing about $780 million in CT X-ray scanners that would help it better detect weapons, explosives and other objects by creating 3-D images of carry-on items.

The issue has also come under scrutiny on Capitol Hill. At a hearing in February, Representative Bonnie Watson Coleman, Democrat of New Jersey, called for the T.S.A. to explore additional ways to deter travelers from bringing guns to airport security checkpoints. She said the increase in unruly passengers and the rise in guns at airports were a “toxic combination.”

Ms. Watson Coleman, the chairwoman of the House Homeland Security Committee’s subcommittee on transportation security, has proposed legislation intended to address the uptick in guns found at checkpoints. Her bill would establish minimum fines for repeat or serious violations and require increased signage at airports to warn passengers against bringing firearms through security screening.

In a statement, Ms. Watson Coleman cited the incident at the Atlanta airport last year and added, “If nothing is done, it is only a matter of time until tragedy occurs and lives are lost.”

Is a Fetus a Person? An Anti-Abortion Strategy Says Yes.