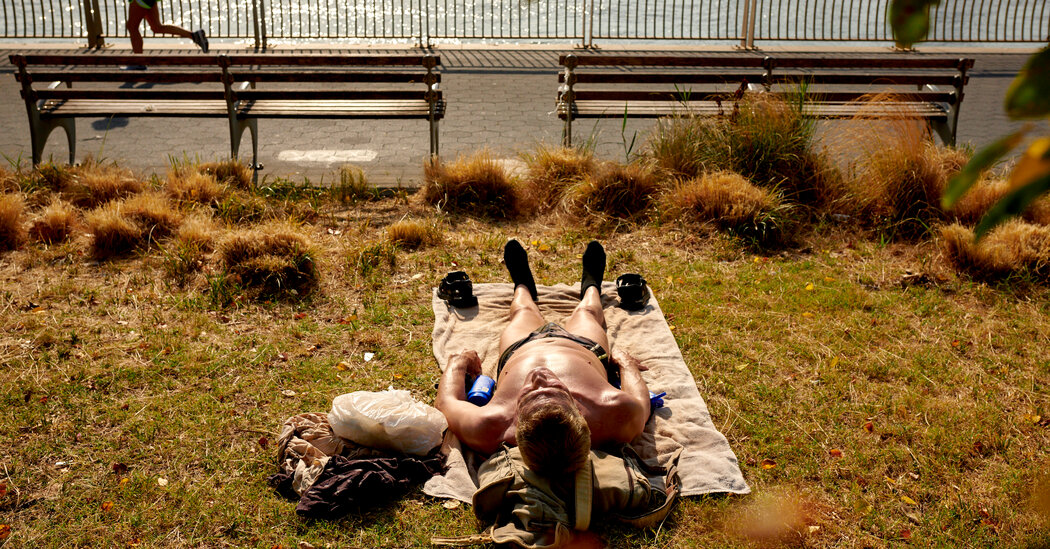 Forecasters are predicting record-high daily temperatures in New York City and other parts of the Northeast on Sunday as a nationwide scorching was expected to peak in many places around the United States.

Temperatures were expected to exceed New York City’s previous July 24 record of 97 degrees, which was set in 2010, Richard Bann, a meteorologist with the National Weather Service, said on Saturday. (The record high for Central Park, 106 degrees, was set in July 1936, according to the Weather Service.)

Officials across the country braced for the high temperatures, which followed several days of a heat wave.

About 71 million people live in areas expected to have dangerous levels of heat on Sunday, meaning a heat index of at least 103 degrees. The heat index is a measure of how hot it really feels outside, taking into account humidity and temperature.

Large sections of the Midwest, including Kansas, Missouri and Oklahoma, are facing such levels of heat, along with areas from Southern California to the coast of North Carolina.

Several other areas, including parts of the Texas panhandle and the Tennessee Valley, were also expected to approach or break daily temperature records on Sunday, Mr. Bann said.

Temperatures on Monday should be almost as high as Sunday, but then moderate after that in the Northeast and other parts of the country, he said.

“It’s Tuesday by the time we get a push of cooler air into the Northeast and parts of the Mid-Atlantic,” he said.

Late on Saturday, New York City’s Office of Chief Medical Examiner confirmed a heat-related death with contributing factors listed as hypertensive cardiovascular disease and emphysema. No other information about the death — including location, time or name of the victim — was immediately released.

Philip O’Brien, a spokesman for Con Edison, the city’s power utility, said that peak megawatt usage on Saturday in New York City and the nearby suburban county of Westchester was about 10,300, less than this month’s high of 11,500 megawatts, set on Wednesday.

That peak itself was lower than in recent years, with the record being about 13,300 megawatts, set in July 2013. That decline in usage over time is partly the product of more energy-efficient appliances, he said.

To protect the power grid, New York City officials asked residents to use less energy. Some suggestions included turning up the air-conditioner to 78 degrees and unplugging appliances like televisions and computers.

“You can hit the beach or head to the pool to keep cool, too!” the city said on Twitter (though not Rockaway Beach, which was closed on Saturday after shark sightings).

Philadelphia declared a heat emergency on Thursday that remains in effect. The action activates several city services designed to keep people safe, including making libraries available as cooling stations and placing air-conditioned buses throughout the city.

On Thursday, Boston extended a heat emergency, which was announced on Monday, through Sunday. The Weather Service said the heat index in Boston on Sunday could reach 105 degrees. A high of 99 degrees was forecast for the city. If reached, it would surpass a daily record high temperature of 98 degrees that was set in 1933, the Weather Service said.

Hundreds of people die from extreme heat in the United States every year. To stay safe, the National Weather Service recommends that people drink fluids, stay in cooler rooms, keep out of the sun and check on vulnerable relatives and neighbors.

While tying a single heat wave to climate change requires deeper analysis, heat waves around the world are growing more frequent and dangerous and lasting longer.

The 2018 National Climate Assessment, a major scientific report by 13 federal agencies, noted that the number of hot days was increasing, and the frequency of heat waves in the United States jumped from an average of two per year in the 1960s to six per year by the 2010s.

Kangana Ranaut is all praises for Sanya Malhotra in Pagglait, says ‘you deserve everything’