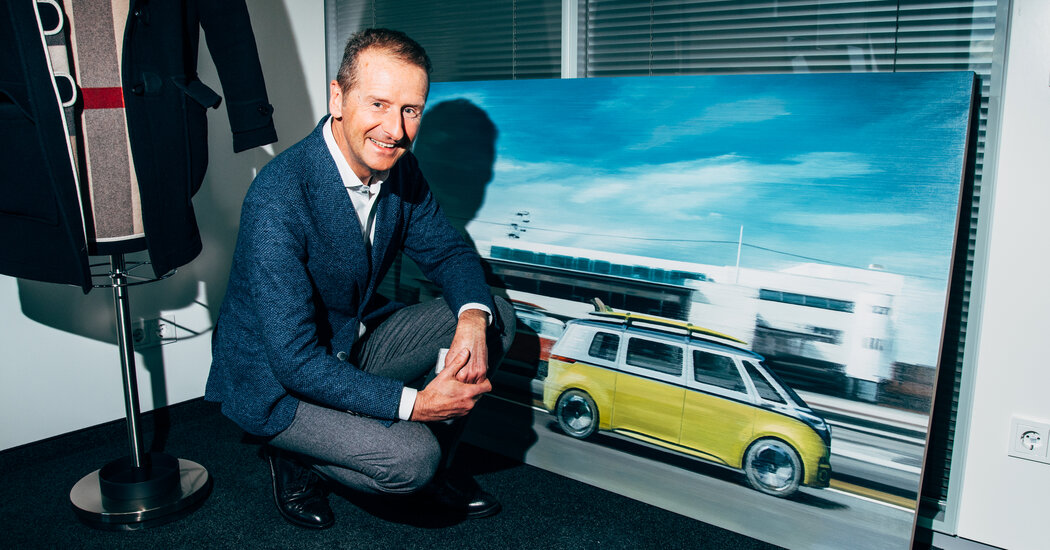 BERLIN — Herbert Diess, who helped restore Volkswagen’s reputation after a costly and embarrassing diesel emissions scandal and bring the company into the electric age, resigned unexpectedly Friday after a tenure marked by friction with the carmaker’s powerful labor union.

His abrupt resignation at a critical juncture for Volkswagen is sure to raise fresh questions about the company’s convoluted governance structure, an uneasy balance of power among labor representatives, local government and descendants of Ferdinand Porsche, who oversaw construction of the Beetle in the 1930s.

The giant automaker said Mr. Diess would leave at the end of August, without giving a reason for his departure, which the supervisory board said was by “mutual agreement.” He will be succeeded on Sept. 1 by Oliver Blume, the chief executive of Porsche, the company’s profitable sports car unit.

“Herbert Diess played a key role in driving forward the transformation of the company,” Hans Dieter Pötsch, chairman of the board, said in a statement in which he thanked Mr. Diess for pushing the company’s move into electric vehicles.

Hours before the announcement late Friday afternoon in Germany, Mr. Diess, 63, posted a message on his social media channels thanking VW employees for their work in the first half of the year and wishing them a good vacation. He made no mention of his impending departure.

“After a really stressful first half of 2022 many of us are looking forward to a well-deserved summer break,” he said.

Mr. Diess’s future at Volkswagen had been in doubt on multiple occasions during his four years as chief executive, a post that predecessors typically held for a decade or longer. Last fall, he clashed with the company’s powerful works council about his electrification strategy and management style.

In October 2015, a month after the company confessed to rigging diesel cars to conceal illegally high emissions, Mr. Diess, then the head of the unit that makes Volkswagen brand cars, presided over a meeting where he and the other executives wrestled with ways to restore Volkswagen’s good name. They decided that the best way to shake Volkswagen’s reputation as a cynical polluter would be by developing cars with no tailpipe emissions at all.

The decision gave Volkswagen a head start over rivals like Toyota or General Motors in offering cars that were designed from the ground up to run on batteries. Volkswagen sells more electric cars in Europe than Tesla, the all-electric automaker that recently opened an assembly plant outside Berlin.

But Mr. Diess’s outspoken admiration for Tesla and Elon Musk, its chief executive — which even led to rumors several years ago that Volkswagen would merge with Tesla — unnerved some factions within the company.

And Volkswagen’s electric models have been plagued by software problems that raise questions about its ability to compete with Tesla. Mr. Diess was blamed for failing to get the software problems under control.

The software “simply had too many problems,” Ferdinand Dudenhöffer, a longtime observer of the German auto industry, said in an email. “So far only Tesla has succeeded in developing its software independently. All the other carmakers, including VW, seem to have big problems in making the transition to software-defined cars.”

Last year, Mr. Diess set off a battle with labor leaders when he mentioned that up to 30,000 jobs could eventually be cut as the company turned toward making more electric vehicles.

That prompted a committee within the supervisory board to address the tensions between the two sides. There was speculation that Mr. Diess’s job could be on the line, and lists of possible successors circulated. Eventually, in December, he won new backing from the board, but some of this responsibilities were stripped away.

Mr. Blume, Mr. Diess’s successor, is likely to continue Volkswagen’s push into electric vehicles. At Porsche, Mr. Blume oversaw development of the all-electric Taycan, which has been a hit.

The holding company for the Porsche and Piëch families, which owns a majority of the voting shares in Volkswagen, thanked Mr. Diess for his service but also lavished praise on Mr. Blume, saying he “enjoys our special trust.”

Slack C.E.O. Stewart Butterfield to Step Down in January

With Roe Gone, Republicans Quarrel Over How Far to Push Abortion Bans