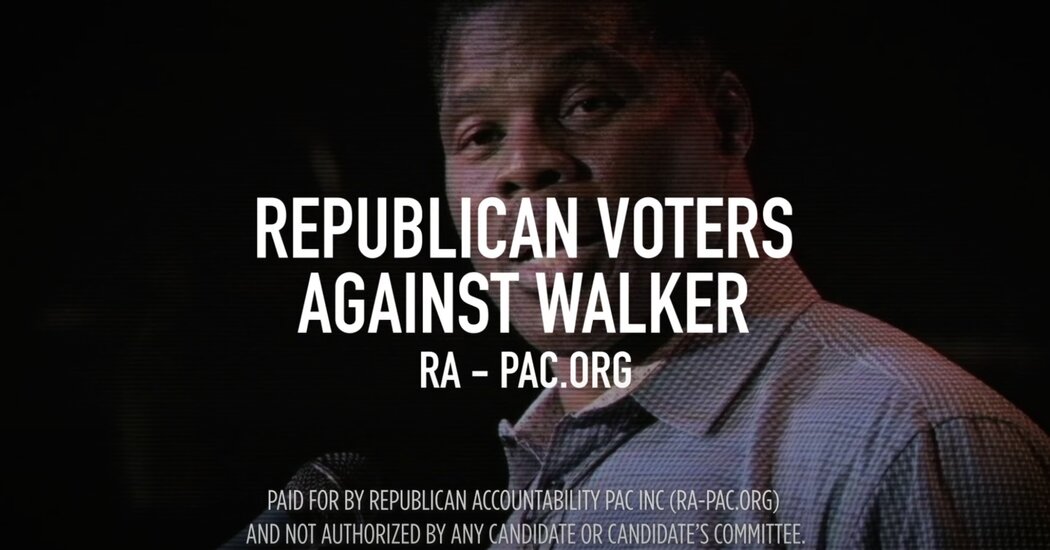 ATLANTA — In his campaign for the Senate, Herschel Walker has not hidden his past struggles with mental illness and violence in past relationships, aspects of his background that he outlined in a 2009 memoir and that his campaign sought to address in its earliest days.

Now, a group of anti-Trump Republicans is hammering him over one of those episodes.

In a new advertisement running on major networks in the Atlanta media market, footage of Mr. Walker scoring a touchdown for the University of Georgia is juxtaposed with close-up video of his ex-wife, Cindy Grossman, describing how he once held a gun to her temple and threatened to pull the trigger.

“Do you think you know Herschel Walker?” a narrator asks. “Well, think again.”

Mr. Walker has not denied Ms. Grossman’s accusations, saying his violence against her was a consequence of his struggles with mental health. His campaign did not respond to a request for comment.

The ads were purchased by a subsidiary of the Republican Accountability PAC, a group that grew out of Republican Voters Against Trump, which was established in 2020 by “never-Trump” Republicans including the strategist Sarah Longwell and the writer William Kristol. It says it has allocated $10 million in negative advertising and voter mobilization efforts over the next three months to stop Mr. Walker and other candidates it views as unfit for office or a danger to democracy. They include two candidates for governor, Doug Mastriano in Pennsylvania and Kari Lake in Nevada.

The initial ad buy against Mr. Walker in the Atlanta media market is just $100,000. It would take far more to make serious inroads with Georgia’s vast Republican base, for whom Mr. Walker still retains near-godlike status from his career as a college running back. But the anti-Trump group is hoping at least to turn the heads of some swing voters.

Specifically, Ms. Longwell, the group’s executive director, said it hoped to exploit what she called an emerging gap in support for candidates atop Georgia’s Republican ticket. While Mr. Walker was running roughly even in the polls with Senator Raphael Warnock, the incumbent Democrat, she said, Gov. Brian Kemp was outpacing his Democratic opponent, Stacey Abrams, by a slightly larger margin.

One such voter she pointed to was Brenda James, a Republican from Columbus, Ga., who in an interview said she voted for Mr. Trump in 2016 but President Biden in 2020, according to the Republican Accountability PAC. She condemned Republicans for “attempting to manipulate and use” Mr. Walker.

“Bless poor Herschel’s heart,” Ms. James said. “The man needs help. He doesn’t need to be thrust into political limelight in the way that they are doing. Frankly, I think it’s disgusting and despicable.”