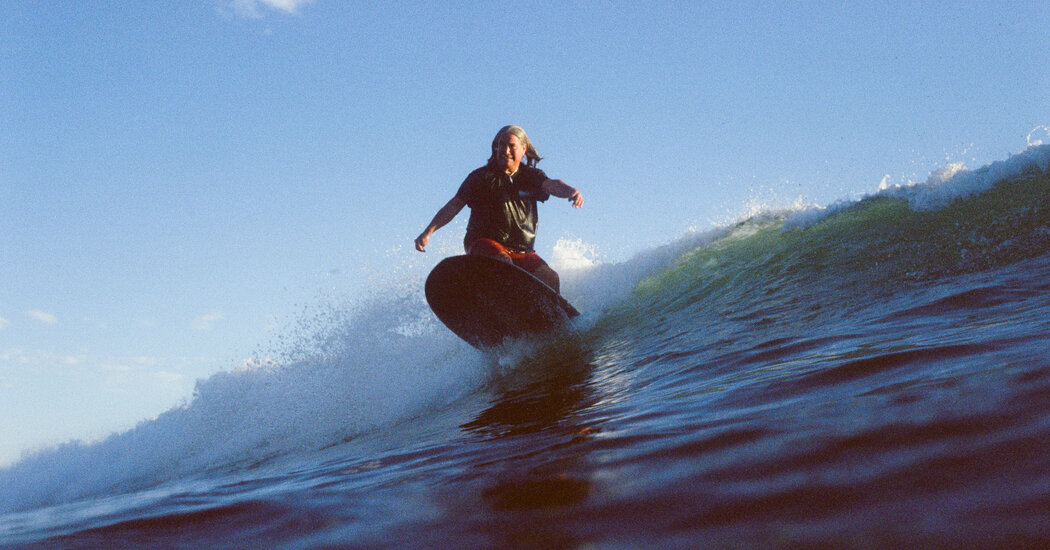 “I remember my uncle saying to me, ‘Kid, do me a favor, when my time comes, make sure my tools collect dust in the right way, not the wrong way,’” Mr. Takayama said, covered in flakes of sanding dust.

In the midst of shaping a longboard surfboard by hand, Mr. Takayama was standing, barefoot, on the bay’s well-worn carpet. In his hand was a planer that once belonged to his uncle, the celebrated waterman, surfboard shaper, and world surfing champion Donald Takayama, who died in 2012. And on his rack, a fresh piece of thick white foam, the longboard’s core.

“Surfing one of Michael’s boards is like riding a magic carpet built just for you,” said Sophia Culhane, 16, a professional surfer from Hawaii who is ranked third on the World Surf League (W.S.L.) International Women’s Longboard Tour.

Although Mr. Takayama calls himself a shaper, that is not entirely accurate. From start to finish there are no fewer than 15 steps in crafting a Michael surfboard. And while some shapers will simply focus on the first step and outsource the rest, Mr. Takayama, 55, completes every stage in the five areas of his 1,100-square-foot surfboard factory.

“I want to make the best quality surfboards known to man or woman,” he said.

Constructing surfboards begins with raw pieces of foam called blanks. And before Mr. Takayama will even pick up a planer to begin shaping, he asks customers to send photos or videos of themselves surfing. Better yet, he will meet them at the beach, and they will paddle out and surf together.

“Understanding a person’s style and skill level is essential,” Mr. Takayama said, “and then it’s about what they want to do, and making a board that will get them there.”

Jessi Miley-Dyer, a former professional surfer who now is senior vice president of tours and head of competition for the W.S.L., said: “With surfing, your shaper is your translator. You’re going through that journey with them, and they are connecting the dots in your equipment and progression.”

Once Mr. Takayama assesses his client’s surf skills, he moves into his shaping bay, where he takes a blank and, using a planer, begins shaving pieces of foam off like a sculptor does with a piece of marble. He will sometimes use a CNC (computer numerical control) machine to shape the foam into a rough outline, but he always completes the shaping process by hand.

Mr. Takayama will then coat the board with hot resin and insert a fin box, a narrow piece of plastic that is pushed into the blank toward the tail to hold the fin. The board is then sanded; Mr. Takayama’s spear-shaped logo is applied in resin; and what are called pin lines, lines that hide the fiberglass overlap, are added.

Mr. Takayama frequently uses inlays — pieces of fabric cut and placed in certain locations on the board. Those are added next.

A gloss coat of a different type of resin is applied, then there are three rounds of sanding, using 600 grit, 800 grit and 1200 grit sandpaper in progression. The entire process ends with a fiberglass surfboard polishing compound, which is brushed on and then smoothed with a buffer.

“Some newer board shapers, they just make pop-outs, copies of the same board,” said Ms. Culhane, the professional surfer from Hawaii, who comes from a family of surfers. But, she noted, “Michael touches every board in every step. That’s super special. And because he’s there for the whole process, he knows how to fix or adapt a board to a person. He knows exactly what he did and what he can do to make it better.”

Mr. Takayama can make any kind of surfboard, but he specializes in longboards and has five models: Mana-T, Comp, Annihilator, PerPlexer and WTF. They start at $2,200 and, to date, his most expensive one was $5,000.

Right now, getting a board from Mr. Takayama takes roughly 18 months from order date to delivery. About 140 cards — printouts of orders with dimensions like length and width, as well as details like color and inlay preferences — are pinned to the wall around the shaping bay.

“Michael lives and breathes surfing and surfboards,” said David Arganda, who is ranked seventh on the W.S.L. North America Men’s Longboard Tour and has been Mr. Takayama’s apprentice for the last 18 months. “He shows up to the beach to watch people who ride his boards in contests.”

“It’s really cool to be a fly on the wall because he’s so into his craft and obsessed with being the best but also learning new things,” he said. “The people who know about Michael definitely know, and the other people that don’t know and aren’t patient are missing out big time.”

At the factory, Mr. Takayama’s younger son Kaimana, 24, who is ranked eighth on the W.S.L. International Men’s Longboard Tour, and grandson Noah (son of Mr. Takayama’s elder son John) do less technical jobs like taking orders and preparing boards for shipment, but it is Mr. Takayama, with the help of Mr. Arganda, who does the creative work.

Rising between 2 a.m. and 3 a.m. every day, Mr. Takayama drives the 15 miles from his home to the shop. “3 a.m. is the problem-solving hour,” he said during a midday interview, pulling his thick, shoulder length salt-and-pepper hair into a low ponytail. “My uncle used to go into his shop in the middle of the night, and now I’m starting to understand why.”

Throughout the surfing world, the name Takayama is connected to words like “royalty” and “iconic,” beginning with Donald Takayama’s stellar career in and out of the water.

“Donald was one of the first board builders that was world-renowned,” said L.J. Richards, a former competitive surfer who now sits on the board of advisors for the California Surf Museum in Oceanside. Mr. Richards, 82, added, “Michael, who was right beside me in Donald’s shop watching him shape and build boards, fits right into the next generation of that level of craftsmanship and skill involved.”

Born in Albuquerque, to a German mother and a Native Hawaiian/Japanese father, Michael Takayama was the youngest of four children. A military family, they moved three times before settling in Southern California when Mr. Takayama was seven years old.

“That summer, I discovered surfing and Uncle Donald, who was living in Solana Beach, and from that point on it was the ocean for me,” Mr. Takayama said.

He started competing when he was 10 and has never stopped. “Four years ago at the Mexi Log Fest in Sayulita, I had the longest hang 10,” the 55-year-old said with a grin, referring to a competition in Mexico and the surf position that requires having all 10 toes wrapped around the board’s nose. “I smoked some of the kids and that felt good.”

Although he spent hours in his uncle’s shop during his high school years, Mr. Takayama spent nearly four decades installing flooring and bathrooms. “I absolutely loved it, going into someone’s home and taking something old and making something new,” he said.

But when his uncle started passing on his tools, and then died, Mr. Takayama began seriously toying around in his uncle’s shop and then built a shaping room in his own garage.

Less than a year later, his life changed. “I woke up one morning 55 pounds heavier than I am now. After enjoying the party and drinking for 30 years, I looked in the mirror and it was life or death,” he said. “The clarity came. I stopped smoking tobacco and drinking alcohol.”

Mr. Takayama officially established Michael Surfboards in 2019. The three-time world champion Honolua Blomfield won two of her titles on Michael Surfboards. At the Surfing For Hope Longboard Classic at Pismo Beach, Calif., in October, 17 out of 80 pro riders opted to surf his boards. At that competition, Ms. Culhane won the women’s event on one of Mr. Takayama’s boards.

“My boards are really, really special. All of them have rainbows; it stands for my dad, who passed away from suicide when I was six,” Ms. Culhane said. “Michael understood the reasoning of that and made it an art form rather than just a detail.”

“I consider myself beyond a perfectionist,” Mr. Takayama said. “I’ve remade boards because the color isn’t right. I’ve seen people tell me something can’t be done, I do it and then they copy my design. This process in its entirety is becoming a lost art, and I like to think of myself as a surfboard tailor, hopefully for many more years to come.”

Some trying to target credibility of constitutional bodies due to political interests: PM Modi