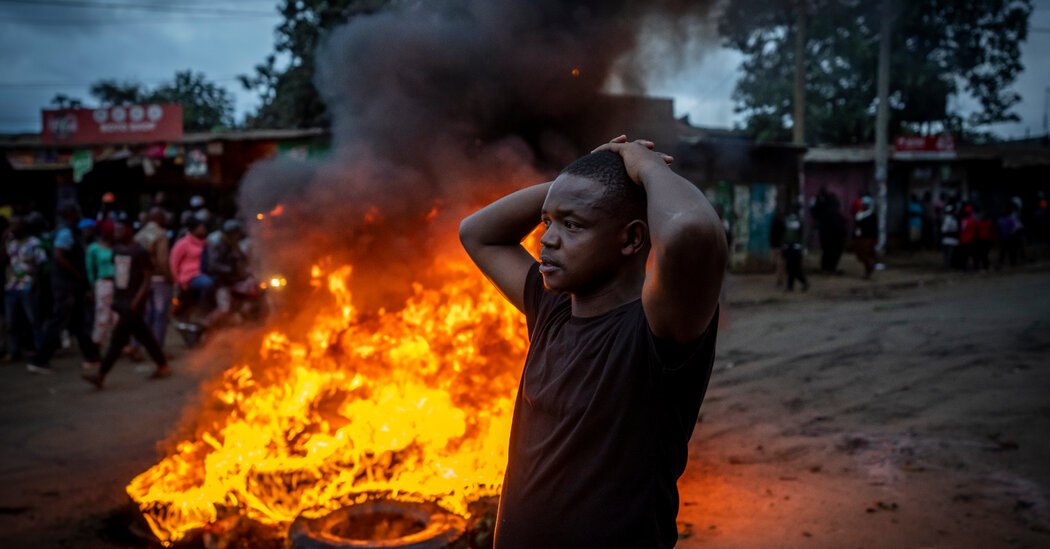 The United States is far from alone in facing pressure on its democratic norms and institutions. According to data from V-Dem, a monitoring institute based in Sweden, more democracies are declining, and even sliding into autocracy, today than at any point in the last century. This trend, continuing for over a decade, appears to be accelerating, data shows, affecting established and fragile democracies alike across the globe.

Here’s a look at some of the latest developments.

Though considered one of Africa’s most robust democracies, Kenya has faced periodic turmoil. Politicians there have sometimes exploited polarization along ethnic and geographic lines, particularly during elections. This has led to succession crises, communal violence or attacks on institutions such as the courts.

A razor-thin election this August has brought with it another test for Kenyan democracy, with a senior aide to the losing candidate suggesting that their campaign might challenge the results as fraudulent.

“The state of democracy in our country, Kenya, is sitting in a very hostile territory,” William Ruto, the election’s winning candidate, said at a Washington, D.C., event earlier this year.

This multiethnic and religiously diverse democracy has been questioned since the brother of Mahinda Rajapaksa, a former strongman, took power in the 2019 elections. The Rajapaksa family had long faced accusations of abusing power and vilifying the country’s minorities, raising fears that Sri Lanka might return to autocracy.

This summer, demonstrations over economic issues culminated in protesters storming the presidential palace. The president, Gotabaya Rajapaksa, resigned, but appointed an ally as his replacement; that ally later formally became president, with the Parliament’s blessing. This has left the conflict between protesters and the influence of the Rajapaksa dynasty in limbo.

“The new state that we are building is an illiberal state,” Hungary’s prime minister Viktor Orban declared in 2014.

Since then, Mr. Orban, who casts himself as a vanguard of the global populist right, has retooled the courts, the Constitution and voting rules in ways that have cemented his rule. He has also wielded state-run and private media against opponents, promoting disinformation and nationalist narratives.

Mr. Orban has cast these steps as necessary to defend Hungary from the corrupting influences of racial diversity, non-European immigration and the European Union. While opposition parties have risen built on discontentment with Mr. Orban, he retains a meaningful base of support.

President Jair Bolsonaro, who praises Donald J. Trump as a political model, has long criticized Brazil’s democratic institutions as corrupt. He has also spoken fondly of the country’s right-wing military dictatorship, which ruled from 1964 to 1985.

Mr. Bolsonaro is already questioning the legitimacy of Brazil’s presidential race coming up in October, in which he has consistently trailed in the polls. He has even enlisted the help of some military leaders in raising doubts about the integrity of the vote.

Though it is unclear whether Mr. Bolsonaro would actually seek to overturn or reject a loss, his rabble rousing has elevated international concern over the stability of Latin America’s largest democracy.

Rodrigo Duterte’s six years as president in the Philippines saw political rivals and critical journalists jailed, the widespread dissemination of pro-Duterte disinformation and a wave of vigilante police violence that left thousands dead.

A fiery populist, Mr. Duterte positioned himself as defending democracy from the opponents he cast as threats to the country from within, winning support from his base despite his excesses while in office.

Though he left office willingly at the end of his term in May, voters elected a new president, Ferdinand Marcos, Jr., that rights groups fear will continue his style of rule. The new President Marcos is the son of a former dictator of the Philippines. His vice president, Sara Duterte, is Mr. Duterte’s daughter.

The country’s roughly 200 million Muslims have faced political marginalization and, in many cases, deadly religious violence, with officials at times looking the other way. Critical journalists come under growing pressure from both the government and an increasingly nationalist media.

Mr. Modi’s government clamped down fiercely on the disputed region of Kashmir and responded harshly to a wave of protests by Indian farmers last year, raising fears that his rule was growing increasingly strong-armed.

In his nearly 20 years in power, Recep Tayyip Erdogan has remade Turkish democracy into a vessel for his personal rule. Once seen as a liberalizing force, Mr. Erdogan has curtailed political freedoms and centralized power so drastically that he is widely seen as a dictator.

After a 2016 coup attempt against him, Mr. Erdogan’s administration detained 100,000 people and purged 150,000 government employees from their jobs, cementing his power. Still, there remains enough of a semblance of democracy that opposition groups unseated Mr. Erdogan’s ally from the powerful mayoralty of Istanbul in 2019 and hope for further gains.

Once Eastern Europe’s great post-communist success story, Poland is now facing deep political polarization. The ruling right-wing party has sought to subordinate the traditionally independent judiciary and media to its will. It also railed against the European Union, which has questioned whether Polish leaders’ are upholding the rule of law.

In recent months, fears for Poland’s democracy have ebbed slightly. Polish leaders have sought to repair ties with the European Union, including over democracy matters, as a way to fight against what they see as the Russian threat to Europe. Still, rights groups say that Polish democracy has hardly reversed its backward steps.

This small Central American country had established a fragile democracy in the wake of its wrenching civil war, which ended in 1992 but created wounds that are still healing.

A young outsider, Nayib Bukele, won the presidency in 2019 promising change. In office, however, he has curbed basic rights, purged judges, jailed thousands with little due process and deployed the army, all in what he calls an emergency measure to fight crime.

Still, even as rights groups and international monitors raise alarms, Mr. Bukele has grown wildly popular, a reminder that, in today’s world, would-be strongmen are often cheered while on the rise.

Once South America’s oldest democracy and wealthiest economy, Venezuela has collapsed into an economic disaster zone, with much of the population hungry and ruled under what is widely considered a dictatorship.

The country is often held up by democracy scholars as representative of how democracies tend to decline today: slowly, pulled down from within by elected populists who treat opponents and institutions as illegitimate, and whose actions may initially be quite popular.

The leader who oversaw much of this decline, the leftist firebrand Hugo Chávez, died in 2013. His successor, Nicolás Maduro, has overseen deadly crackdowns on protesters, as well as asserting forceful control over the courts and legislature.

When the populist outsider and billionaire media tycoon Andrej Babis became the prime minister of the Czech Republic in 2017, there were fears he might follow the path created by Mr. Orban in Hungary toward arch-conservative illiberalism. As nearby Slovenia elected its own right-wing populist, concerns arose of a bloc of nations that might break the European Union from within.

While Mr. Babis did inch his country in that direction, he was ultimately felled in the 2021 elections, when several opposition parties banded together against the leader they called a threat to Czech democracy. Slovenian voters cast out their populist government the next year. Both countries served as demonstrations that doubts around democracy can still sometimes recede.