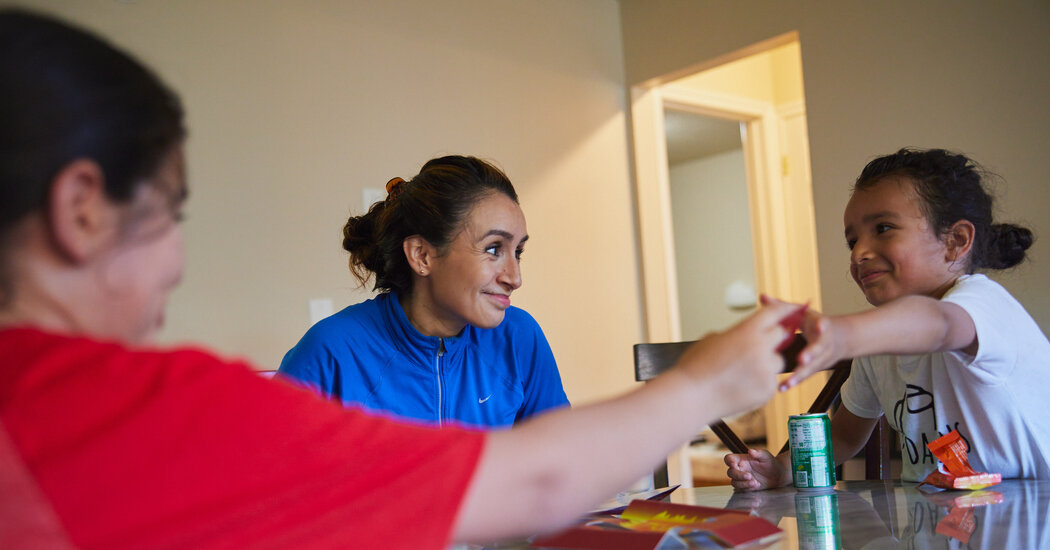 We asked people who quit during the “Great Resignation” how it helped them reconnect with their loved ones. This is what they told us.

This has been a summer of laughter in Ana del Rocío’s home.

For years, her small apartment in Portland, Ore., had echoed with shouts, a soundtrack of misery brought on by the tension between Ms. del Rocío’s demanding work schedule and her perpetual search for the child care relied upon by so many single mothers.

So on Dec. 31, Ms. del Rocío, 35, left her job as executive director of a nonprofit to be at home with her two young sons. Since school let out, her days have been filled with soccer, drawing and a lot of tickling.

The shift has not come without sacrifice. Ms. del Rocío misses the sense of purpose she felt at her job, and her family’s financial future is uncertain. But the memories she’s created with her sons — Tupac, 10, and Inti, 7 — have made the change worth it.

“I feel really badly when I look back on their early years, my younger son especially. I was never here,” Ms. del Rocío said. “I was always working. They were always with caregivers. I just really want to make up for that lost time.”

It’s a sentiment shared by many of the more than 50,000 who have quit their jobs since the start of last year, as part of the “Great Resignation.” Faced with choosing between their careers and their loved ones, many opted to put their professional dreams on hold after enduring the stresses brought on by the pandemic.

It was not an easy decision for Ms. del Rocío.

A pivotal moment arrived in the summer of 2019, when she helped secure a $1 million grant for her nonprofit. Between PowerPoint slides, she checked texts and emails hoping to line up child care for Tupac, who needed emergency surgery for a dental abscess.

“I couldn’t go,” Ms. del Rocío said. As executive director of the nonprofit Oregon Futures Lab, she added, “It’s my job to raise the money. I have staff to pay on payroll.”

Ms. del Rocío’s brother-in-law took Tupac to his surgery, but the experience was eye-opening: “I had to miss out on this important time in my kid’s life.”

These days, Ms. del Rocío hardly misses a second. The family’s unstructured days are filled with activities dreamed up by Inti, an artistic child who loves Greek mythology and has created a hybrid Pokémon/Avatar: The Last Airbender game.

WAS IT WORTH IT? Ms. del Rocío knows she’ll have to return to work eventually because her retirement savings will run out by the end of the year. But for now, she’s enjoying the laughter in her home.

“I relish in that sound,” she said.

A local filmmaker, Dawn Jones Redstone, learned of Ms. del Rocío’s balancing act and wrote a film based on her life, called “Mother of Color.” She stars in the film and at one point promises her son she’s not going to leave him. “Because,” the first-time actress says, a soft smile forming on her face, “you belong with me.”

We asked readers who have quit their jobs, what it has meant for the relationships — familial, romantic, social — in their lives. Here are a few of their stories.

Ms. Masson’s husband, Pat Troy, died of a heart attack in 2018, and her town, Redding, Conn., with its rural feel and low population, is hardly considered a hot spot for meeting single men.

Ms. Masson worked as an IT program manager and, after cost-cutting measures at her company brought on an increased workload, found herself feeling burned out. She quit her job in March 2021 and made the most of her newfound free time. Ms. Masson chaperoned her 11-year-old daughter, Sadie, and her niece on a cross-country road trip; learned Tai-chi and how to play tennis; and brushed up on her French.

In May 2021, after getting vaccinated, she threw herself into the single life by trying something new: Match.com. Most potential suitors, Ms. Masson recalled, messaged her, saying something to the effect of “Hey there.” And then there was Eugene Casey, who like her spoke French and was curious about her childhood. About three months into their relationship, Ms. Masson told Sadie about Mr. Casey. “I don’t want a new daddy,” Sadie said.

Mr. Casey, she told Sadie, would just be her friend. A successful ice cream outing changed the tenor of the relationship, and it was not long before Mr. Casey and Sadie found something to bond over.

“They both enjoy mocking me,” Ms. Masson said. “They’re very goofy together.”

WAS IT WORTH IT? Ms. Masson, who returned to the work force last December with a 40-hour-per-week contract job, Sadie and Mr. Casey recently took a trip to Guadalupe Island, Mexico, and are set to tour Norway in August. Much of Ms. Masson’s energy today is dedicated to her relationship, a shift that seemed unfathomable a couple of years ago.

“I am happy and excited for what our life will be like together,” Ms. Masson said.

No one could calm down Alice Dixon like the cellist Yo-Yo Ma.

Even in the later months of her life, as dementia tore through her memories, his music brought the mother of three to a happy place.

Quentin Dixon, 52, cherished those moments with her mother. In August 2021, Ms. Dixon quit her job as an associate professor at Texas A&M University, College Station and began flying once a month from Texas to Maryland, where her mother lived with the assistance of a professional caretaker in Ms. Dixon’s childhood home.

“I want to have some time with her before she completely loses her memories, before she forgets who I am,” Ms. Dixon said.

It was after one of these weeklong visits that Ms. Dixon learned that her mother, who was vaccinated and boosted, had tested positive for Covid-19 and contracted pneumonia. In early February, with Ms. Dixon and other family members present, Alice Dixon died in her home. She was 83.

Ms. Dixon had felt knots in her stomach as she typed her resignation email from her tenured professorship; her mother and grandmother, both teachers, had always preached the value of financial security. But that tension eased as Ms. Dixon made final memories with her mother: She read a book to her, and brought her to visit local gardens and restaurants; the two had enjoyed afternoon teas.

WAS IT WORTH IT? Ms. Dixon is unsure of the next step in her professional life. Her husband’s business is doing well, so she doesn’t feel financial pressure to return to work. She’s spent the past few months traveling and spending time with family. If not for the pandemic, Ms. Dixon conceded, she might have handled things differently. But she is grateful that she made room to spend time with her mother in her final months.

“Once you sort of can’t do anything, can’t go many places, what’s left? Your relationships,” Ms. Dixon said. “My mother had always been there for me. I wanted to be there for her.”

‘You feel more of a couple’

Ever since his 20th birthday, when he took his first flying lesson, Paul Curtis had lived a life of motion.

But after Mr. Curtis quit his job as a cargo pilot in May — he said the company was making more money than ever, but hadn’t increased compensation for its employees — he found himself spending long days with his wife of 11 years. And he loved it.

“We can plan things together. You feel more of a couple,” Mr. Curtis, 54, said. “You go shopping together. The mundane stuff of life that everyone takes for granted, we haven’t really done much of that. It’s like a special occasion.”

Mr. Curtis and his wife, Jenny Pathmarajah, live on Jersey, the largest of the Channel Islands, a self-governing dependency of the United Kingdom. As a pilot, Mr. Curtis would typically work 30 consecutive days before returning home for 15. Over the past few months, after finishing his doctorate in philosophy through Bangor University in Wales, he’s been taking time to enjoy the “small things.”

WAS IT WORTH IT? Mr. Curtis has not shaken his love of flying, but he’s excited about his next phase. He and Ms. Pathmarajah, a Methodist minister, have moved to Cambridge, England, and he’s looking for work as a university professor. His wife is happy that he’s home more, and not just because of the companionship.

“Jenny likes the fact that I’m just around to do the odd jobs, like mow the lawn,” Mr. Curtis said with a chuckle.

IPL 2021: Natarajan set to miss remainder of SRH matches due to knee injury

China plays down its vaccine rivalry with India

IMF projects India’s growth rate to jump to impressive 12.5 per cent in 2021