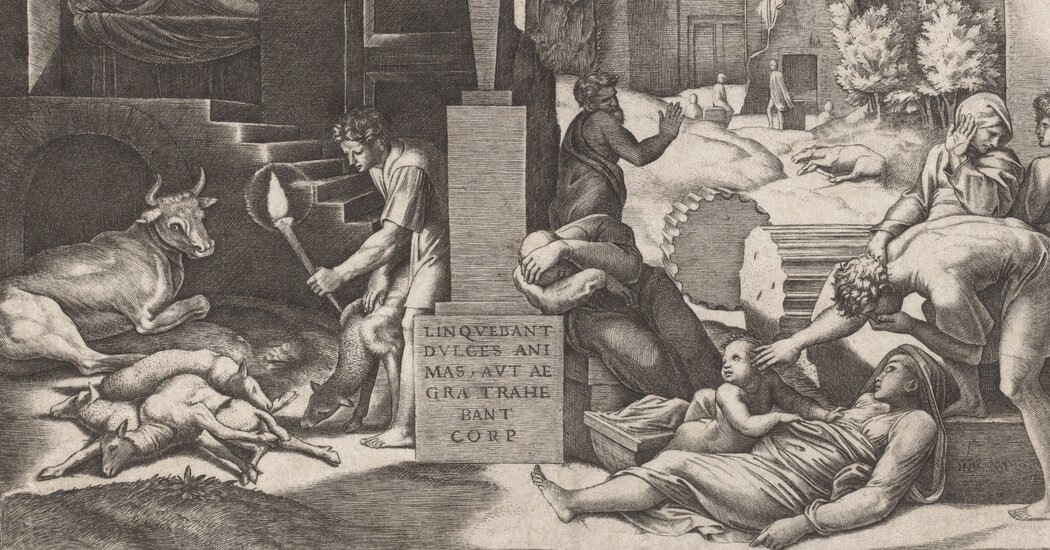 Scientists have discovered several genetic variants that protect Europeans from the bubonic plague — but also increase the risk of immune disorders.

Many Europeans carry genetic mutations that protected their ancestors from the bubonic plague, scientists reported on Wednesday in the journal Nature.

When the Black Death struck Europe in 1348, the bacterial infection killed large swaths of people across the continent, driving the strongest pulse of natural selection yet measured in humans, the new study found.

It turns out that certain genetic variants made people far more likely to survive the plague. But this protection came with a price: People who inherit the plague-resistant mutations run a higher risk of immune disorders such as Crohn’s disease.

“These are the unfortunate side effects of long-term selection for protection,” said Hendrik Poinar, a geneticist at McMaster University in Canada and an author of the new study.

Bubonic plague is caused by Yersinia pestis, a species of bacteria spread by fleas. Although the plague has been infecting people for thousands of years, it struck medieval Europe with intense ferocity that led scientists to wonder if the Black Death had changed the genetic makeup of Europe.

“We would expect to see a major shift,” Dr. Poinar said.

The idea makes basic evolutionary sense: When a lot of organisms die off, the survivors will pass down mutations that protected them from death. During the Industrial Revolution, for example, peppered moths changed from a light speckled coloring to dark. That shift was driven by the coal smoke that blackened the trees where the moths rested. Dark moths were better able to hide from birds and survived to pass on their genes.

When the Black Death struck, there were no evolutionary biologists to document its impact. In the 1990s, some scientists searched for clues by studying the DNA of living Europeans. A mutation in one gene, called CCR5, is present in 10 percent of Europeans but rare among other people. In 1998, researchers proposed that the gene might have offered protection during the Black Death.

But later research showed it was impossible to rule out that the CCR5 mutation spread in response to another disease at another time in history. “It’s something that a lot of people talk about but is very hard to demonstrate,” said Luis Barreiro, a population geneticist at the University of Chicago and an author of the new study.

Instead of studying living people, Dr. Barreiro, Dr. Poinar and their colleagues examined the DNA of people who lived centuries ago, extracting genetic material from human remains buried in three London cemeteries. They found fragments of DNA in 318 skeletons that had lived between 1000 and 1500. The remains included 42 victims of the Black Death.

Comparing the bones from before and after the plague hit, the scientists found a striking difference in DNA: Hundreds of mutations in genes involved in immunity became more common after the epidemic.

This shift was not proof on its own that the mutations conferred some evolutionary advantage. Biologists have long known that mutations can become more common in a population thanks to the vagaries of history — a process called genetic drift.

To compare natural selection and genetic drift, Dr. Barreiro and his colleagues went back to the DNA of the Londoners for another look. They took advantage of the fact that large stretches of our DNA contain no working genes. Mutations that strike those stretches are unlikely to cause any harm. They’re also unlikely to bring any benefit. They only spread thanks to genetic drift.

Dr. Barreiro and his colleagues found that some of these neutral mutations became more common after the Black Death. But 35 of the mutations in immune genes spread far faster than the neutral ones — so fast that only natural selection could account for their success.

For another test, the scientists repeated their experiment, this time in Denmark.

They found DNA in the skeletons of 198 Danes who lived between 850 and 1800. Mutations in immune genes also rapidly spread in Denmark after the Black Death, they found. When the scientists lined up the mutations from the London and Denmark samples, they found four that had spread in both populations. These four mutations spread so quickly in London and Denmark that they must have provided an impressive protection against the plague.

The researchers found that carrying two protective versions of a gene called ERAP2, for example, made people 40 percent likelier to survive the Black Death — the largest evolutionary advantage ever found in humans, Dr. Barreiro said.

“It’s actually shocking,” said David Enard, an evolutionary biologist at the University of Arizona who was not involved in the new study.

Dr. Enard said the study was particularly compelling thanks to the way the scientists ruled out genetic drift. “What really gives this study its power has to do with this whole approach of designing careful comparisons,” he said.

ERAP2 makes a protein that’s involved in the immune response to invading bacteria and viruses. When an immune cell swallows a pathogen, it presents proteins from the invader on its surface. They serve as an alarm to the rest of the immune system. ERAP2’s job is to snip off bits of the foreign proteins to prepare them for their display.

Billions of people have a version of the ERAP2 gene with a mutation that makes it impossible for cells to make its protein. But people with this version of the gene don’t suffer major harm. That’s most likely because humans have many other genes that help present foreign proteins to the immune system.

During the Black Death, Dr. Barreiro and his colleagues found, natural selection favored the working version of ERAP2. To better understand why, they mixed Yersinia bacteria with immune cells from people with both versions of the gene.

The researchers found that two working copies of ERAP2 allowed the immune cells to wipe out the bacteria. Without it, the cells did a significantly worse job.

But that version of the gene also increases the risk of Crohn’s disease, a disorder in which the immune system attacks friendly bacteria in the gut and causes damaging inflammation. Dr. Barreiro said it was possible that ERAP2 could be too good at its job, sounding the alarm against friends and enemies alike. The other mutations he and his colleagues identified from ancient DNA have also been linked to immune disorders.

Dr. Barreiro and his colleagues are continuing to study the genes that evolution favored during the Black Death, not only to understand that chapter in history, but also to understand the genes themselves. The fact that they underwent such strong natural selection most likely means they are important in the fight against diseases — and perhaps not just the plague.

“It was important in the past, and it most likely is going to be important today,” Dr. Barreiro said.

Russia Signals That It May Want a Bigger Chunk of Ukraine