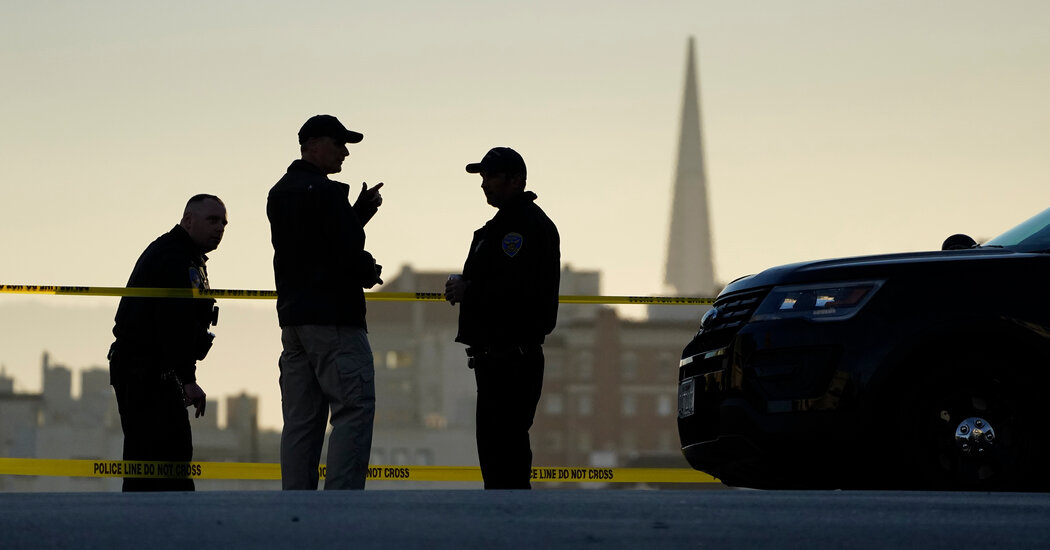 David DePape’s life was unstable when he embraced Gamergate and far-right conspiracy theories. He is now accused of breaking into Speaker Nancy Pelosi’s home and assaulting her husband.

SAN FRANCISCO — Bitter over the end of a long relationship, estranged from his children and working carpentry jobs to keep a roof over his head after a time living on the streets, David DePape retreated into isolation, spending hours each day in the online worlds of gaming and chat rooms.

Mr. DePape, the suspect in the brutal attack on Speaker Nancy Pelosi’s husband, had an obsession with video games as a boy, and at some point in his adult life it appeared to metastasize into something darker. According to his blog posts, the online harassment campaign known as Gamergate, which began in 2014 as a backlash against female critics of the gaming industry and included misogynistic attacks and death threats, became a catalyst of his growing interest in right-wing conspiracy theories and the many rants against women that he posted on his blog.

“How did I get into all this,” he wrote in one passage. “Gamer Gate it was gamer gate.” He described Gamergate as a “consumer led revolt against communism,” and railed against “wokism” and feminism — complaints that appeared to be precursors to his later embrace of the most virulent and bigoted of online conspiracy theories. It all came in an era in which such theories have spread among wider groups of Americans and have been promoted by far-right leaders.

Mr. DePape, 42, sits in a San Francisco jail cell, accused of busting into the Pelosi residence in the early hours of Oct. 28 and bludgeoning the speaker’s 82-year-old husband, Paul Pelosi, with a hammer. The attack last month left Mr. Pelosi unconscious and lying in a pool of his own blood. But the real target, prosecutors say, was Ms. Pelosi, who was in Washington at the time.

Prosecutors, who have been scouring Mr. DePape’s copious online writings, say the attack was politically motivated, and that Mr. DePape intended to hold Ms. Pelosi, who is second in line of succession to the presidency, as a hostage and interrogate her. (On Thursday, she announced she will step down from her leadership role in January.) The attack, less than two weeks before the midterm elections, reverberated across the nation’s political landscape, heightening fears of political violence in an age of misinformation and conspiracy theories.

The precise contours of Mr. DePape’s life will be pieced together by investigators as the criminal cases against him move forward; he faces a multitude of state and federal felony charges. But already, the apparent role of Gamergate in his radicalization stands out.

In recent years, it has not been uncommon for Gamergate to become a gateway for disaffected men to discover conspiracy theories like Pizzagate and QAnon, two subjects Mr. DePape wrote about, and to become wrapped up in right-wing Trumpian politics, said Joan Donovan, the research director of the Shorenstein Center on Media, Politics and Public Policy at Harvard University.

“When it comes to the vicious misogyny of Gamergate, it doesn’t surprise me to realize that he went after a female public figure,” said Ms. Donovan, who recently co-wrote a book, “Meme Wars,” that traced the role Gamergate has played in the rise of alt-right political movements.

For instance, Steve Bannon, the provocateur who once ran the right-wing news outlet Breitbart News and was an adviser to former President Donald J. Trump, sought to connect the outrage of the Gamergate community, with its cohort of often isolated, mostly white men, to the politics of Trumpism.

More on the Paul Pelosi Attack

“You can activate that army,” Mr. Bannon once told the journalist Joshua Green of Bloomberg Businessweek. “They come in through Gamergate or whatever and then get turned on to politics and Trump.”

Interviews with the people who were closest to Mr. DePape at different times of his life describe a man who was always on the periphery of things, someone who never wanted to stand out and was often fearful of talking to people.

As a boy growing up in Canada, he moved between coastal British Columbia and a farming and ranching community farther inland, and he was described by relatives and classmates as quiet and shy. He liked to retreat into the fantasy worlds of video games, and chose not to go to his high school dance.

In his 20s, he settled in the San Francisco Bay Area with Oxane Taub, an activist famous for protesting in the nude, who is now serving time in prison for several crimes including the attempted abduction of a 14-year-old boy. Mr. DePape and Ms. Taub, who is known as Gypsy, had two children together, dabbled in psychedelic drugs and occult practices and marched against the Iraq War.

Over the last several years, in part disillusioned by the end of his relationship, Mr. DePape took a dark turn: He lived under a tree in a park in Berkeley, told people he was Jesus and spent more and more time online.

“He had tremendous anxiety,” Gypsy Taub said in a telephone interview from the California Institution for Women in Chino, Calif. “He was terrified of people.” Ms. Taub, who said she lost contact with Mr. DePape several years ago, added, “He was literally afraid to say hello.”

Mr. DePape’s own words — taken from his online writings, which were removed from the internet after the attack — help fill out a picture of his life.

In one passage, he described the traumas that shaped him: His biological father was never part of his life, he said, producing a feeling of “abandonment shame”; his grandmother once scalded him with hot water, he claimed, leaving a scar on his back; and worst of all, he said, he was bullied in high school.

“This is the one that really scarred me,” he wrote. “That’s the wave of shame that overwhelmed me.”

Adam Lipson, the public defender representing Mr. DePape in the state case, did not respond to messages seeking comment for this article.

After a recent court hearing, he told reporters that he would be examining Mr. DePape’s mental health, as well as his “vulnerability” to online misinformation and conspiracy theories.

In San Francisco activist circles in the 2000s, Ms. Taub and Mr. DePape were an odd match. While she sought the limelight at every turn, stripping naked at protests against the city’s ban on public nudity, Mr. DePape always kept his clothes on and was often on the edge of the action, camera in hand, filming the protests. Ms. Taub also drew Mr. DePape into a new age spiritual community called Lazaris, which claims a mystical consciousness is channeled through a former insurance salesman from Michigan, dispensing wisdom and guidance.

Ms. Taub said that Mr. DePape, who is not a United States citizen and was living illegally in the United States at the time of his arrest, had no outward political beliefs when they first met in Hawaii in October 2000.

When he joined Ms. Taub in San Francisco, he quickly adopted what she described as her “very progressive” political leanings — opposing the wars that followed the 9/11 terror attacks and supporting President Obama. From 2002 to 2009, Mr. DePape was registered as a Green Party voter in San Francisco, and, despite not having citizenship, attested to being eligible to vote, according to county records.

Even then, there were signs that the types of anti-government conspiracy theories that Mr. DePape embraced leading up to the attack on the Pelosi residence were a part of the couple’s life. Ms. Taub promoted beliefs on a public access television channel that the 9/11 terrorist attacks were an inside job.

Ms. Taub described the suspicion that she said she shared with Mr. DePape that a “shadow government” was controlling events, made up of “the people who push the buttons” behind the scenes.

After Mr. DePape left the home he shared with Ms. Taub in 2015 — their romantic relationship had ended years before — he lived for a time under a tree in a bay-front park in Berkeley that was popular among homeless residents, and kept his belongings in a storage locker. He found steady work starting in 2016, when he was hired by Frank Ciccarelli, a carpenter who found Mr. DePape hanging around a lumber store.

The two men worked together for almost six years, up until the time Mr. DePape was arrested. In that span, Mr. Ciccarelli helped Mr. DePape find housing, in an apartment in a friend’s garage. The address of the apartment in Richmond, Calif., is the same one that was listed on the registration for Mr. DePape’s blog.

Mr. Ciccarelli said he witnessed his friend’s descent in recent years into the deeper and darker reaches of the internet, becoming more isolated and falling captive to online conspiracy theories like the claim that the 2020 presidential election was fraudulent; QAnon, whose adherents believed that a cabal of Democratic pedophiles was working to undermine President Trump; and Pizzagate, a precursor to QAnon whose claim was that elite Democrats were running a child sex-trafficking ring out of a Washington restaurant.

“You would talk about politics, and he was just not rational,” Mr. Ciccarelli said. “He just thought that one side was lying, and one side was telling the truth. It was very black and white. And it was just being reinforced.”

Mr. Ciccarelli, who took Mr. DePape to Thanksgiving and Christmas meals and was the closest thing to family that Mr. DePape had in recent years, suggested in an interview that Mr. DePape was tormented by his emotions.

“So he disassociated, and he dealt with his feelings by basically playing computer games whenever he wasn’t working,” Mr. Ciccarelli said. “He had no friends. He had no social life.”

Back in British Columbia, Mr. DePape’s relatives and former acquaintances tried to reconcile the news of the brutal attack on Mr. Pelosi with the person they once knew well.

Gene DePape, Mr. DePape’s stepfather, who for a time “raised him as my own” after he divorced Mr. DePape’s mother, described his stepson as good-natured and quiet, and as someone who never got into trouble. But he said he grew concerned about his stepson when, as a teenager, David appeared to grow increasingly isolated and became obsessed with video games.

Gene DePape said he tried for years to reconnect with his stepson, to no avail.

Mark DePape, David DePape’s uncle, said he had not seen his nephew in more than 20 years.

“He just decided one day: He was gone,” Mark DePape said.

One high school acquaintance, Loretta Court Brisco, described David DePape in a Facebook message as someone “not seeking to be noticed or stand out.” Another, Alisha Mills, said he was “impressionable” and “a bit of a follower.”

On carpentry jobs, he would feed birds and talk to the squirrels, Mr. Ciccarelli said, and would sometimes tell Mr. Ciccarelli he believed that he was living inside a computer simulation.

Mr. Ciccarelli said he would answer, “David, well, do you want me to slap you across the face and see?”

DMK will waive education loans if voted to power: Stalin