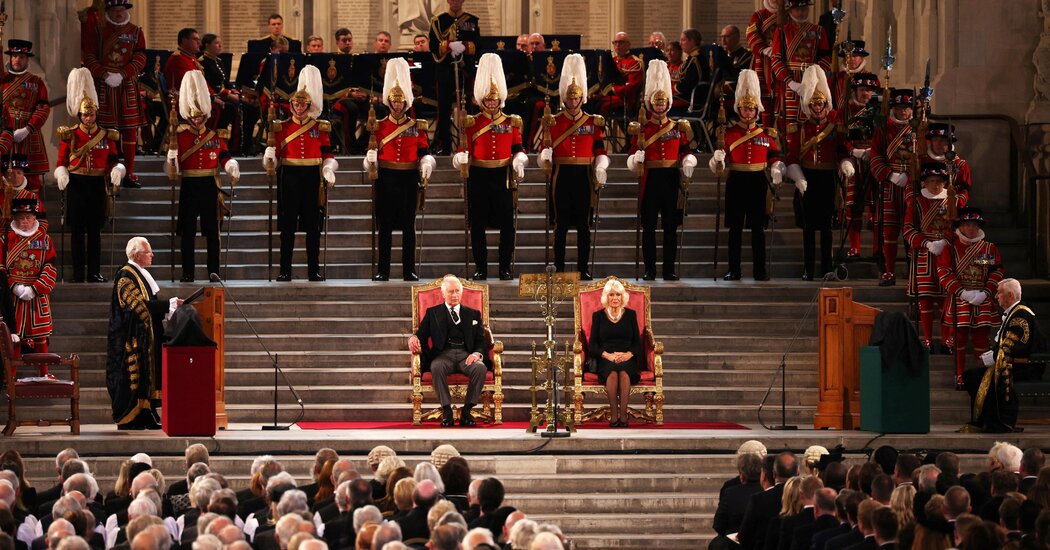 A quarter-century ago Princess Diana’s shocking death provoked outrage at the royal family. Queen Elizabeth’s passing, in contrast, has been draped in civility and respect.

LONDON — The noise rippled through the crowd gathered near Buckingham Palace to mark Queen Elizabeth’s death — a rustling of phones, a sudden cheering, a burst of applause. “I just saw her!” a woman exclaimed excitedly as a dark car sped past, possibly containing some royal, or royal-adjacent, passengers.

How different from a quarter-century ago. Reviled then as the woman who wrecked a royal marriage and destroyed a modern fairy tale, Camilla is now Britain’s queen consort, her image buoyed by the softening of a country’s judgments and the sheer passage of time.

“I think she’ll support Charles just the way Philip supported the queen,” said a well-wisher in the crowd, 52-year-old Diane Pett, speaking of Elizabeth’s late husband and the new King Charles. “Who are we to judge?”

As thousands of people converge on palaces in England and Scotland to mark the (so far) seamless transition from one monarch to another, it’s hard not to be transported back to 1997, another national inflection point. That was when Diana, the 36-year-old Princess of Wales and the ex-wife of Charles, was killed in a car crash, and London erupted in a collective howl of anguish and outrage.

It felt feral, bewildering, a rupture to the natural order of things. There was a dangerous crackle in the air, a fury at the royal family for what was seen as callous treatment of Diana in life and a gross misjudgment of the depth of grief at her death.

Prince Charles, accused (along with Camilla, then his girlfriend) of having been instrumental in Diana’s unhappiness, worried that he might be jeered at or even attacked by the crowd as he and other male members of the royal family briefly followed Diana’s coffin on foot in London. Emotions were so high that there was talk that the monarchy itself might be on the verge of collapse.

But not any more. As Britain settles in to wait for the queen’s funeral on Monday, it is as if that earlier time has been all but forgotten.

For now, there is a mood of quiet agreement, if not about the monarchy’s long-term future, then about the importance of the moment. There is respect for the queen’s long reign and even a kind of appreciation for the baroque rituals — the reading of proclamations, the signing of documents, the swearing of oaths, the sounding of trumpets, the courtiers’ costumes with their be-furred and be-feathered hats — that have been dusted off for the occasion.

Possibly the 1,000-year institution makes sense after all?

“The monarchy is an apolitical symbol of national unity and of Britain’s long history and deep stability,” said Gideon Rachman, chief foreign affairs columnist for The Financial Times.

A historic visit. On May 18, 1965, Elizabeth arrived in Bonn on the first state visit by a British monarch to Germany in more than 50 years. The trip formally sealed the reconciliation between the two nations following the world wars.

First grandchild. In 1977, the queen stepped into the role of grandmother for the first time, after Princess Anne gave birth to a son, Peter. Elizabeth’s four children have given her a total of eight grandchildren, who have been followed by several great-grandchildren.

Princess Diana’s death. In a rare televised broadcast ahead of Diana’s funeral in 1997, Queen Elizabeth remembered the Princess of Wales, who died in a car crash in Paris at age 36, as “an exceptional and gifted human being.”

Golden jubilee. In 2002, celebrations to mark Elizabeth II’s 50 years as queen culminated in a star-studded concert at Buckingham Palace in the presence of 12,000 cheering guests, with an estimated one million more watching on giant screens set up around London.

A trip to Ireland. In May 2011, the queen visited the Irish Republic, whose troubled relationship with the British monarchy spanned centuries. The trip, infused with powerful symbols of reconciliation, is considered one of the most politically freighted trips of Elizabeth’s reign.

Breaking a record. As of 5:30 p.m. British time on Sept. 9, 2015, Elizabeth II became Britain’s longest-reigning monarch, surpassing Queen Victoria, her great-great-grandmother. Elizabeth was 89 at the time, and had ruled for 23,226 days, 16 hours and about 30 minutes.

Marking 70 years of marriage. On Nov. 20, 2017, the queen and Prince Philip celebrated their 70th anniversary, becoming the longest-married couple in royal history. The two wed in 1947, as the country and the world was still reeling from the atrocities of World War II.

Losing her spouse. In 2021, Queen Elizabeth II bade farewell to Prince Philip, who died on April 9. An image of the queen grieving alone at the funeral amid coronavirus restrictions struck a chord with viewers at home following the event.

Mr. Rachman, whose parents emigrated from South Africa to England, noted that every royal coronation since 1066 has taken place in Westminster Abbey. “I think that kind of thing is a source of pride and comfort for people,” he said in an interview, “maybe particularly those of us whose parents came here from much more turbulent countries.”

But after Diana’s sudden, violent death in Paris in 1997, Britain was wracked with turbulence, uncertainty and incipient republicanism. Then, as now, crowds flocked to royal palaces, blanketing the grounds with flowers. Then, as now, there was wall-to-wall coverage of a royal death and endless TV chatter about the arrangements for a royal funeral. The grief was different, for the sudden death of a young woman rather than the sad but expected passing of an elderly monarch.

“It was as if you were living in a revolutionary time,” the novelist and political commentator Robert Harris said. “I’ve never known an atmosphere in London like it. It was borderline hysteria, as if a coup might take place. Nobody knew what might happen.”

Mr. Harris wrote about Diana’s funeral, at Westminster Abbey, for The Mail on Sunday. He was seated not far from Diana’s brother, Earl Spencer, whose stirring funeral address included a biting attack on the decision to strip Diana of her “royal highness” appellation and made a pointed distinction between the family she married into and her “blood family.” (That he came from an ancient noble family, far older than the queen’s, and that the queen was his godmother, added to the punch of the insult and gave his remarks the sense of a brewing mutiny.)

“There was a pause after he finished speaking,” Mr. Harris recalled. “Then there was this curious sound, like rain drumming on the roof, and it became clear that it was the distant sound of applause from all the people gathered outside” — watching on a giant screen near the abbey. Eventually, the applause swept through the church, though the queen and the senior royals did not participate.

“It felt like if we’d been living in Shakespearean times, the Spencer forces would have marched on London and there would have been a Spencer regency with the two princes,” Mr. Harris said, speaking of Diana and Charles’s sons, Princes Harry and William.

It was virtually the only time in her long reign that the queen cast tradition aside and bent to popular will. Under prodding by Tony Blair, then the prime minister and alarmed at what he saw as a crisis of royal legitimacy, Elizabeth returned to London from Scotland and gave a televised address the night before the funeral acknowledging the people’s bewilderment and pain. That helped defuse some of the urgency of the emotions.

Subsequent events — Charles’s marriage to Camilla and Camilla’s gradual acceptance by the queen; the passage into adulthood of William and Harry; Elizabeth’s general imperturbability; the burst of good will following her death — seems to have done the rest.

In an era of troubled democracies around the world, when a violent mob nearly derailed the peaceful transfer of power in Washington in 2021, it has been fascinating to watch the instruments of monarchy play out according to their ancient rhythms.

“No American will ever experience that kind of comfort, that very human form of patriotism across the decades in one’s own life and then the centuries before,” Andrew Sullivan, a Briton who has lived for many years in the United States, wrote recently. “When I grew up studying the Normans and the Plantagenets and the Tudors, they were not just artifacts of the distant past, but deeply linked to the present by the monarchy’s persistence and the nation’s thousand-year survival as a sovereign state.”

As the new king took his oath on Saturday, the seven surviving British prime ministers — John Major, Tony Blair, Gordon Brown, David Cameron, Theresa May, Boris Johnson and Liz Truss, the current holder of the job — gathered politely along with Keir Starmer, leader of the opposition Labour Party. (Never mind that some of them loathe one another and that, as the political writer Adam Bienkov tweeted, Mr. Johnson was “standing with people he has variously compared to a suicide bomber, called ‘girly,’ likened to Col. Muammar el-Qaddafi, said should be tried at The Hague” and blamed for the crimes of Jimmy Savile, the notorious pedophile.)

All the elaborate choreography helped obscure some awkward moments. Preparing to sign a declaration as part of his accession, Charles gestured crossly for an aide to remove some items on the desk and then displayed a teeth-baring grimace as he subsequently noticed that extraneous pens were cluttering the space (the pens were swiftly whisked away).

It also put a temporary bandage over festering family tensions when Prince William and his wife, Catherine, were unexpectedly joined by Charles’s other son, Harry, and his wife Meghan, in a 40-minute walkabout outside Windsor Castle on Saturday. Harry and Meghan, the Duke and Duchess of Sussex, are virtually persona non grata in Britain, at least in the popular imagination, since moving to California and lobbing criticisms at the royal family from across the Atlantic. But the two couples shook hands with star-struck civilians and inspected bouquets of flowers left at the gates.

In another floral inspection at another royal palace, Prince Andrew, the second of Queen Elizabeth’s three sons, emerged briefly from his disgraced near erasure from the family and walked amicably alongside his siblings.

As she stood in Green Park near Buckingham Palace the other day, bouquets of flowers strewn every which way, Janet Ratcliffe, 75, said that after the unpleasantness of the Diana era, she had come to believe that the monarchy could thrive under Charles, and even under Camilla.

“People were very sad, and it was very traumatic,” she said of Diana’s death. She mentioned Camilla, who by now had driven past (or not driven past) in the possibly royal car. She said that Charles had, as far as she could tell, grown into his new role.

“I thought Camilla was the baddie,” she said, “but I’ve come to realize that it’s more complicated than that. They care about each other, and they can do good for the country.”

U.S. vs. Iran at the World Cup: How to Stream

Canada has one more game before turning its focus to 2026.

Germany Gets Even With Spain to Save Hopes of Moving Ahead

Amitabh Bachchan shares intriguing ‘now and then’ post, reveals what changed in 78 years