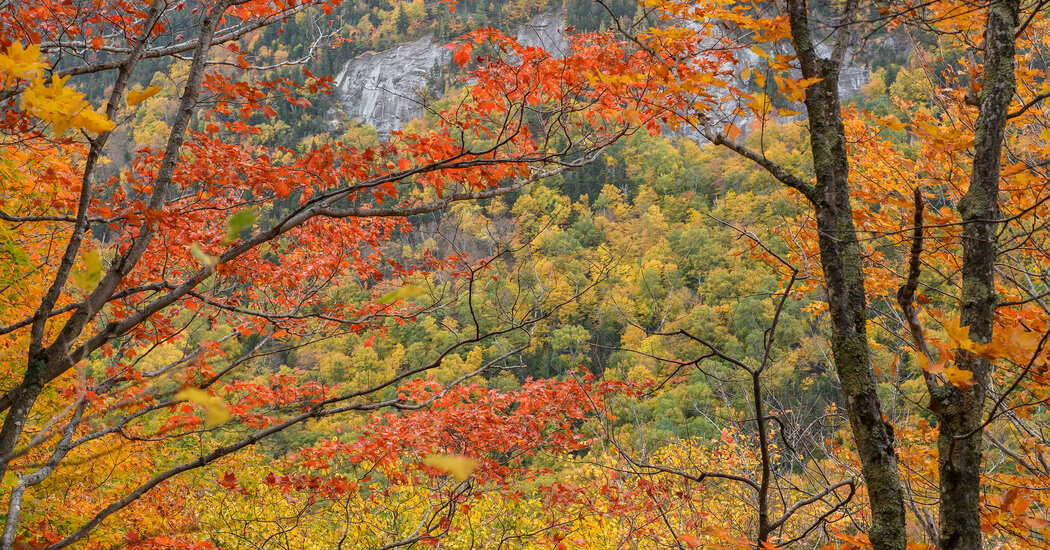 From New England to California, and points in between, the symphony of colors that accompanies the arrival of a snap in the air is playing out differently in 2022.

Planning a pilgrimage to enjoy the brilliant fall leaves will be trickier this year.

Months of record-breaking drought in the Northeast have deprived trees of water, and in the West, nearly 100 large fires have swept a path of destruction across seven states.

From California to Oklahoma to Maine, the symphony of colors that accompanies the arrival of a snap in the air is playing out differently in 2022. But leaf-peepers need not despair. Those looking to feast their eyes on the vibrant foliage of fall will have plenty to savor this year, as long as they plan it right.

The effects of climate change

The impact, Dr. Ober said, can be seen in a few ways: The height of leaf-peeping season is arriving later and sticking around for a shorter period of time.

“Due to warmer weather, the growing season of broadleaf trees in the Northeast and out West is being extended,” he said. “Peak leaf-peeping a few decades ago would happen earlier in the fall, and now it typically happens later on.”

According to Dr. Ober, warm temperatures are keeping some trees green later into the season, staving off the glorious crimson and gold colors that leaf-peepers love. In other regions, a lack of rain is turning others prematurely brown.

This year is shaping up to be the fifth-warmest year in recorded history. The summer of 2022 brought record-breaking heat across the globe. As the mercury rose, water levels dipped dangerously — by August, severe to extreme drought affected more than a quarter of the contiguous United States, and as of late September, a quarter of the Northeast continues to experience abnormally low rainfall.

Dr. Nicole Davi, who leads the environmental science department at William Paterson University, studies trees and the effects that events like extreme weather have on them. She is currently conducting field work in New York’s Catskill Mountains, and said that in many places, this year’s viewing season felt over before it even began.

“We’ve had a pretty serious drought this season, and that can mute colors. What I see in the lower Hudson Valley and northern New Jersey is they’ve kind of skipped the foliage altogether,” she said. “You see how stressed trees have become, and when they’re stressed, you’re not going to see the same brilliance in color.”

When and where to find colors

The good news is that travelers looking for the best colors can lean on hindsight as a guide.

“This season is expected to largely mirror the 2021 season,” said Alan Reppert, a senior meteorologist with AccuWeather.

AccuWeather predicts that peak colors in places like Maine, New Hampshire, Vermont and northern New York will come late this year, in mid- to late October, rather than their usual appearance in late September and the first week of October. This was last year’s trend, as well.

In Michigan and northern Minnesota, leaves will likely drop earlier than usual, thanks to cold fronts, and AccuWeather also predicts that in Minnesota’s Superior National Forest, which is popular for its colorful leaves, foliage has already peaked.

Leaf peepers in the Northeast who may have been hoping that the late summer rains in that region would salvage their season will be disappointed, Mr. Reppert said, because it came too late to undo the damage of a dry midsummer.

“Trees start to prepare for the fall leaf change around the Fourth of July, and rainfall and drought conditions from this point onward really determine the outlook for fall,” he said.

From Boston to New York City, AccuWeather predicts that fall foliage will underperform, and leaves will drop off trees early in the season. Colors are likely to be muted across the Northeast and the Appalachian Mountains, including eastern Pennsylvania, New Jersey and southeastern New York.

And in parts of Connecticut and Rhode Island, some leaves are already turning brown.

In other parts of the country, however, the outlook — and the colors — will be brighter.

Beginning in early October, western Oregon and Washington State are predicted to put on a vibrant display, thanks to a snowy winter and plenty of rain in the spring and early summer. They should reach their peak just before the end of the month.

“Olympic National Park in Washington is one of the places along the West Coast where foliage is expected to be on full display this year,” Mr. Reppert said.

Plenty of rain across the Upper Midwest, the Great Lakes and the Ohio, Tennessee and Mississippi valleys also point to a strong showing for fall colors, and a viewing season that takes off in mid-October and lasts through early November.

Meanwhile, leaf peepers in California, Nevada and western New Mexico, where moderate to extreme drought has persisted for the past two years, can expect a shorter season that doesn’t peak until the end of October, is marked by duller colors and dies out by early November.

Northern California’s trees will offer more brilliance. But wildfire risk in the area means that those traveling to see the leaves should monitor weather conditions and exercise caution.

And from Missouri to Illinois to eastern Kentucky, the bright colors will actually linger longer than usual, with peak colors holding past the first week of November.

In these areas, “in late July and early August, there were 1-in-1,000-year floods that occurred within six days of each other,” Mr. Reppert said. “That increased moisture level will mean states in this region will have longer leaf-peeping periods than in years past.”

And in the eastern Rocky Mountains, a summer of monsoon rains is expected to give way to colors that are particularly vibrant.

“The yellow Aspens that cover Colorado’s high country are expected to look bright this year,” Mr. Reppert said, although he also noted that because of higher temperatures and longer periods of sunshine, foliage will peak slightly later in eastern Colorado. According to a projection from Smoky Mountains National Park, that peak won’t happen until early November.

Last year, colors in the Rockies and the interior Northwest were disappointingly dull thanks to widespread drought and extreme heat. This year, after a wet winter, spring and early summer, the forecast is better.

“Bighorn National Forest, in northern Wyoming, is a bucket-list destination for foliage enthusiasts to visit this season,” Mr. Reppert said.

There are multiple online resources to help leaf-peepers plan the timing and location of their visits.

Travelers in New England can consult the New England Fall Foliage 2022 Forecast, produced by New England Today, and travelers with smartphones can download the Gaia GPS app, created by Outside Online, to check live satellite images of foliage and time their visits accordingly.

Slack C.E.O. Stewart Butterfield to Step Down in January

36 Hours in Mexico City: Things to Do and See