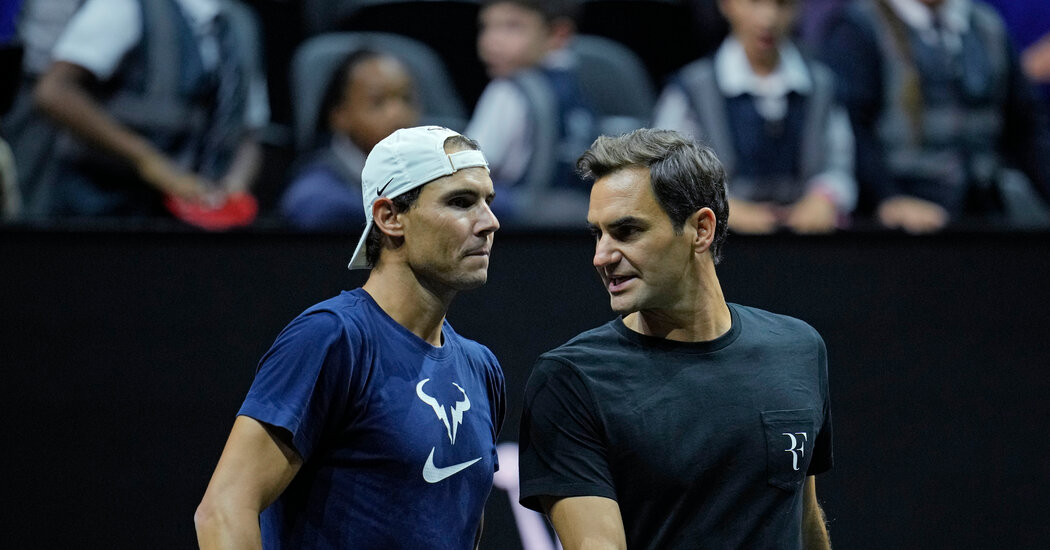 Federer will pair up with Rafael Nadal for a doubles match at the Laver Cup for the last competition of his career. They will play two Americans, Frances Tiafoe and Jack Sock.

On Friday, Roger Federer, the 20-time Grand Slam singles champion, is set to play one final time on the ATP Tour, during the Laver Cup in London.

He won’t be playing singles. Instead, he will be playing doubles, partnered with Rafael Nadal, his longtime on-court rival and friend.

The Laver Cup pits six European players against six players from the rest of the world. The competition, which is sometimes compared to the team-based Ryder Cup golf tournament, is a chance to see players who usually play alone come together.

Federer and Nadal will be playing against two Americans, Frances Tiafoe and Jack Sock. The match will likely happen around 8:30 p.m. London time at the earliest (3:30 p.m. Eastern), because it is not scheduled to begin until after a singles match between Andy Murray and Alex de Minaur (7 p.m. in London, 2 p.m. Eastern).

Federer helped create the Laver Cup and make it a tour event, though on Friday the competition as a whole will take something of a back seat to the opportunity for fans to get one last glimpse at Federer, who has not played since last year’s Wimbledon. The stage is sure to produce several memorable moments.

The Swiss tennis player leaves the game with one of the greatest competitive records in history.

Here are a few things to know about the match:

What channel is broadcasting the match?

In the United States, The Tennis Channel will air the Laver Cup. In Canada, it will be on TVA Sports. ESPN will broadcast the tournament in many Latin American and Central American countries. Eurosport will air the matches in Europe except in France, where viewers will get the competition through beIN Sports. Federer will take the court during the night session in London on Friday.

There are 12 players competing in the Laver Cup. Three players from each team qualify based on their ATP singles rankings on the Monday after the French Open.

Three other players are selected to each team as “captain’s picks.” John McEnroe is the captain for Team World, and Bjorn Borg captains Team Europe.

This year, Team World will be represented by Felix Auger-Aliassime of Canada, Diego Schwartzman of Argentina, Alex de Minaur of Australia, and the Americans Taylor Fritz, Jack Sock and Frances Tiafoe. Tommy Paul of the United States is an alternate for Team World, and Patrick McEnroe, John’s brother, is the team’s vice captain.

Between them, the players representing Team Europe hold more than 60 Grand Slam titles. They are Novak Djokovic of Serbia, Nadal of Spain, Stefanos Tsitsipas of Greece, Federer of Switzerland, Casper Ruud of Norway and Andy Murray of Britain. Matteo Berrettini of Italy is Team Europe’s alternate, and Thomas Enqvist of Sweden, a former player who peaked in the top five, is the team’s vice captain.

The Laver Cup is a combination of singles and doubles matches over three days. The matches are two sets, and if the match is tied at one set each, a winner is determined using a 10-point tiebreaker — the first to 10 points while winning by two takes the match.

Each player plays in at least one singles match on the first two days of the competition, and no player can play a singles match more than twice over the course of the tournament. At least four of the six players on a team play doubles.

Federer was granted an exception to allow him to play once in doubles.

How did the Laver Cup start?

Federer has a special relationship the Laver Cup; it was created by TEAM8, the agency that represents him.

Tony Godsick, Federer’s agent, said that Federer wanted to do something special to honor Rod Laver, the Australian tennis star who won 11 Grand Slam singles titles, including the calendar-year Grand Slam (Australian Open, French Open, Wimbledon and U.S. Open titles all in one year) in 1962 and 1969.

This year’s Laver Cup will be in London at the O2 Arena, an indoor venue that can host up to 20,000 people. The competition rotates between cities in Europe and the rest of the world every year.

Last year, the tournament was played at TD Garden, home of the Boston Celtics of the N.B.A. and Bruins of the N.H.L. Next year’s Laver Cup is set to be held in Vancouver at Rogers Arena, which hosts the Canucks, and the competition will move to Berlin in 2024 at the Mercedes-Benz Arena.

How do you win the Laver Cup?

If the teams are tied at 12 points each, they’ll play one final match on Sunday for the title.

Kangana Ranaut stocks movie together with her 'new but a little irritating friend' |...