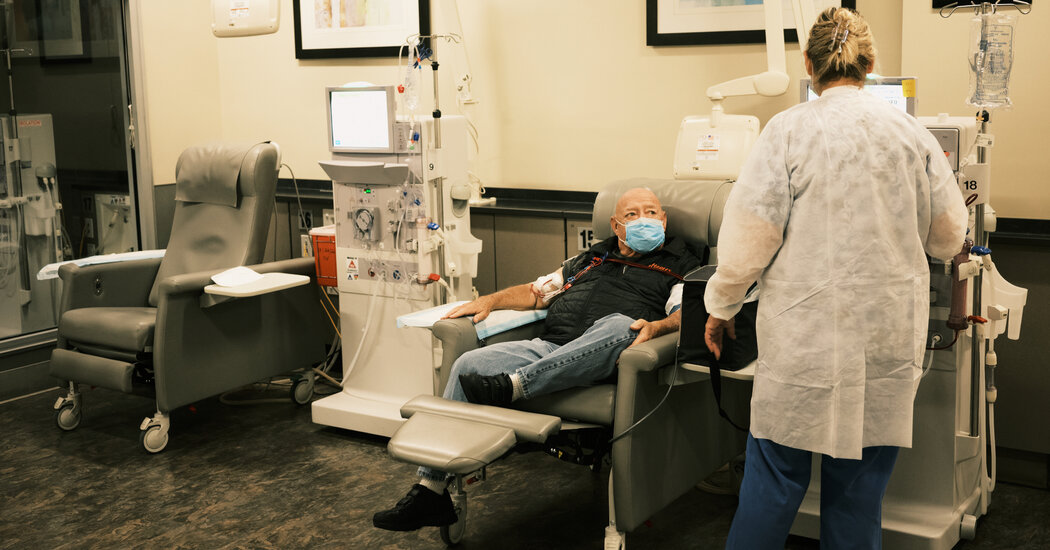 With roads and bridges damaged and water and electricity out, people who rely on every-other-day dialysis treatments needed extraordinary efforts to survive the storm’s aftermath.

The day after Hurricane Ian hit Florida, Michael Condore knew he needed to get off Pine Island.

The storm had damaged the only road access to his beachfront community — a bridge that he normally drove across three days a week to reach a dialysis center in nearby Cape Coral, Fla. Since doctors diagnosed chronic kidney disease in him three years ago, Mr. Condore, 69, has relied on dialysis to survive.

Once before, when he missed treatment for six days, he found himself badly sick, his legs swollen to double their normal size, and he lost a big toe. “That was not going to happen again,” Mr. Condore said. “I was going to get there, somehow.”

“Somehow” turned out to be an eight-hour ordeal — for a trip that would normally take 20 minutes. First, he was ferried by firefighters to the dock at a waterfront bar and grill on the island; from there, he hitched a ride on a crowded fishing boat to the mainland, where one of the center’s nurses picked him up and drove him the rest of the way. His wife had even packed an overnight bag for him in case he couldn’t return home.

“We were some of the lucky ones,” he said.

Ian’s devastating impact on southwestern Florida threw thousands of dialysis patients into a state of crisis, cut off from the regular treatments that stand in for their damaged kidneys. Without the treatments, deadly toxins build up in their blood — a condition that can be fatal after about a week.

The authorities have said that at least three of the 114 deaths in Florida attributed to Ian, including two in Charlotte County and one in Osceola County, happened because the storm left patients unable to access dialysis treatments. The figure could grow as medical officials continue to investigate causes of death from the storm.

Few treatment facilities faced as many challenges as the Cape Coral Kidney Center, part of American Renal Associates, where Mr. Condore had gotten his most recent treatment two days before Ian hit. More than 80 of its patients chose not to evacuate from their homes in places like Pine Island, close to where the hurricane made landfall, or nearby Sanibel Island. Like Mr. Condore, many of them found themselves cut off when their roads were flooded and bridges destroyed.

Officials in Lee County, which includes Pine Island and Cape Coral, have faced criticism for not issuing evacuation orders until the day before Ian made landfall — a day after several neighboring counties had ordered their most vulnerable residents to flee. Officials have defended Lee County’s decision, though it appeared to violate the county’s own evacuation strategy, by pointing to the shifting forecast for the storm’s path.

Some of the kidney center’s patients might have chosen to ride out the storm regardless of official warnings. Mr. Condore said he had just had his roof redone, and thought he would be fine.

In downtown Cape Coral, a city crisscrossed by canals, the kidney center “went through hell” trying to account for patients’ whereabouts after the storm hit, said Dr. Ankush Gulati, a nephrologist at the center. Some had fled or been rescued from rising waters. Phone lines were severed across the region.

Robert Hensley, a registered nurse, hunkered down in the center with another employee, using it as a “home base” during the harrowing hours when Ian came ashore. The building used to be a bank, so it felt safe enough, he said. Mr. Hensley and his co-worker advised patients to download walkie-talkie apps on their phones or to use radios to keep in contact.

After the storm moved on, Mr. Hensley found himself picking up patients off fishing boats at makeshift docks and driving them to dialysis. Even with those efforts, though some went too long without treatment, and had to be hospitalized, Dr. Gulati said. None of the patients from Cape Coral died, he said, but some remained in hospitals for up to two weeks after the storm.

At the same time, the center struggled with restricted water supplies, because the electric power needed to keep the water flowing was out across much of Lee County, and key water lines had been severed. Because of the large volume needed for dialysis equipment and the treatment process, it takes “swimming pools’ worth” of water for a center to function, Dr. Gulati said. So the Cape Coral clinic had to rely on water tanks brought in by the Federal Emergency Management Agency from as far away as Texas.

Other dialysis centers also felt the loss of water, power and accessible roads. DaVita Dialysis, a national provider, shut down 35 of its centers for various periods of time during and after the storm, a spokeswoman said; the company advised the affected patients to begin a three-day emergency diet that reduces the need for dialysis. Within five days of landfall, all of DaVita’s patients had received their treatments, the company said.

Fresenius, another national dialysis provider, had emergency generators, water, fuel and food available at its centers in the storm’s path, a spokesman said.

National dialysis providers have become more efficient in preparing for extreme weather, including working with the federal government to supplement water supplies, since Hurricane Katrina struck in 2005. After that storm, dialysis centers and hospitals across the Gulf Coast had trouble providing treatments, contributing to a higher death toll.

Even so, people can still fall through the cracks. Many patients who rely on dialysis have low incomes, and some, like Jorge Delfin, 32, lack health insurance. A former landscaper living in Fort Myers, Mr. Delfin’s kidney failure was only recently diagnosed; without insurance coverage, he had no other choice but to go to an emergency room for dialysis three days a week, said his wife, Caitlin Delfin.

After the storm, Mr. Delfin’s hospital in Fort Myers lost power and water, so its patients had to be evacuated to Miami. Mr. Delfins’s health documents were lost during the transfer, his wife said. “He went almost a full week without a full dialysis treatment,” she said, adding, “It was a disaster.”

For Mr. Condore, the storm’s aftermath included two more makeshift water taxi rides from his Pine Island home to get to the Cape Coral center, amounting to 30 hours’ worth of round trips. Volunteers captained the boats, which had to navigate past floating debris in waters where buoy markers were missing and sandbars had shifted in the storm.

After so many hours just trying to get to the center, “it was actually relaxing” when his treatments started, Mr. Condore said, adding: “I was glad to sit down in the chair, for once.”