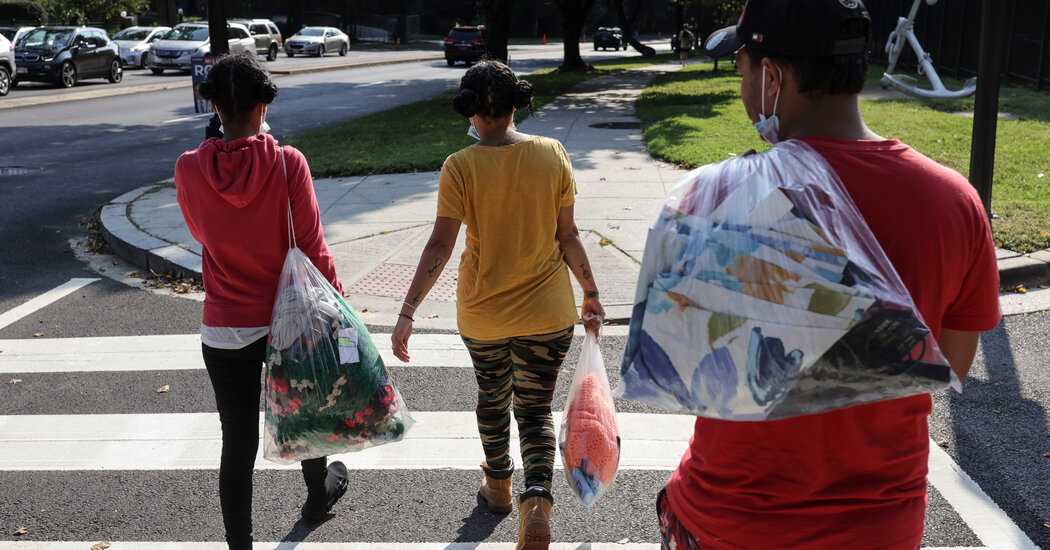 After long, perilous journeys, Venezuelans unexpectedly found themselves on Martha’s Vineyard, wondering what comes next.

Ardenis Nazareth, newly arrived from Venezuela, was standing in a McDonald’s parking lot across the street from a San Antonio shelter a few days ago contemplating his next steps.

After a monthslong odyssey through seven countries he had finally made it to the United States. It was time to banish from his thoughts the worst moments — when he was robbed at gunpoint and people dropped dead of exhaustion beside him as they crossed a lawless jungle, and when he watched helplessly as his friend was swallowed by the turbulent waters of the Rio Grande, just before touching U.S. soil in Texas.

Now Mr. Nazareth had one objective in mind: make money to support the two young daughters he had left behind.

That is when a well-dressed woman who introduced herself as Perla handed him and about 30 other migrants gift cards for the fast-food restaurant, which they gladly accepted. Then she made an enticing offer: a free flight to a “sanctuary,” he recalled, where there were people to help them get on their feet. The place was called Massachusetts.

Was that close to New York, Mr. Nazareth asked. She assured him that it was, and that onward travel would be available, if that is where he hoped to settle. Yet he was surprised when he found himself on Martha’s Vineyard, a small, picturesque vacation destination in the Atlantic. “I thought I was coming to Boston,” he said. “I ended up on this little island.”

He also ended up in the middle of a political drama that escalated this week when Gov. Greg Abbott of Texas sent two busloads of migrants to Vice President Kamala Harris’s residence in Washington and Gov. Ron DeSantis of Florida sent two planeloads of migrants to Martha’s Vineyard. Republican governors in border states have sent thousands of migrants to New York and Washington, arguing that Democratic enclaves whose leaders support more liberal immigration policies should share the responsibility of caring for them. That tactic is causing chaos in cities faced with unexpected arrivals, and changing the trajectory of the lives of individuals, like Mr. Nazareth.

Mr. Nazareth recalled that the woman he met at McDonald’s went table to table making the same offer. Before long, Mr. Nazareth and seven other Venezuelans climbed into a van driven by the woman to reach an airport hotel. More Venezuelans checked in over the following days, until about 50 were placed on charter flights on Wednesday that delivered them to Martha’s Vineyard.

Venezuelans have been fleeing their country amid political and economic turmoil that has caused widespread deprivation. Nearly seven million Venezuelans, more than a fifth of the population, make up the largest international displacement in the hemisphere’s history. Unlike Central American and Mexican migrants who have been immigrating to the United States in large numbers for a long time, Venezuelans are a recent phenomenon and often have no family or friends to receive them.

The U.S. Border Patrol encountered 110,467 Venezuelans along the southern border in the first nine months of this fiscal year, compared with 47,408 in the entire 2021 fiscal year. They now represent the fastest-growing migrant group to the United States.

Tens of thousands have embarked on a perilous route over land through the Darien Gap along the Colombia-Panama border.

“I left my country to support my family,” said Mr. Nazareth, a 34-year-old construction worker. He said that since leaving his home country 18 months ago he had tried to make a living in Peru and Chile. But he could not make ends meet, and word spread among his friends that Venezuelans were managing to enter the United States, where jobs were plentiful.

“I decided I would do anything to provide for my daughters,” he said.

More than 100 Venezuelans set out together, he said. During the jungle crossing, they survived on unripe mango, green bananas and iguanas, he said, after they ran out of food. Thugs robbed most of the money he carried, about $300, he said.

After being harassed by Mexican officials, who demanded bribes, he said, he and his group arrived in Piedras Negras, Mexico, across from Texas, where they intended to turn themselves in to U.S. border authorities. The last leg of their trip was the Rio Grande.

As they began to wade across, ropes affixed to their waists, the currents intensified and the water quickly rose to their chins. Mr. Nazareth’s travel companion, Cesar, 22, suddenly slipped away, and was later found dead.

On Thursday, Mr. Nazareth expressed gratitude for the warm reception that he and his brethren had received in Martha’s Vineyard. “They’re treating us super well,” he said.

“We’re getting food, clothing, all our needs met. I love Massachusetts!”

His plan: “I want to start working as soon as possible.”

Carlos Guanaguanay, 25, said that he and two friends were strolling through the aisles of a supermarket near the shelter in San Antonio a few days ago when a woman approached them.

“She asked us what we were doing here,” he recalled. “We said that we were looking for work.” Three days later, they were traveling on a bus from the La Quinta hotel with other Venezuelans to board a Massachusetts-bound flight.

“We faced hunger, slept in the streets but we have arrived,” said Mr. Guanaguanay, a motorcycle mechanic.

Dependent on a robust tourism industry, the island’s population swells from about 20,000 year-round residents to about 150,000 during the summer months. With that shift comes a dramatic drop in jobs in the off-season. The migrants arrived just as the busy season ended and during one of the worst affordable housing shortages in the island’s history.

The church where they are staying is home to the sole homeless shelter on the island. St. Andrew’s sits in a quiet corner of Edgartown, off the main drag where summer visitors feast on dripping ice cream and oysters.

The parish’s two buildings straddle a narrow, one-way street that on Thursday was crammed with police cruisers, immigration lawyers, translators, news cameras and a few dozen volunteers. Island residents stopped by throughout the day to donate food, clothes and shoes.

Just behind the parish, a crew of Brazilian laborers, a large immigrant work force on the island, was renovating a two-story home.

“We are meeting their needs for food, shelter, and we are definitely supplying them with a lot of love,” said Lisa Belcastro, the manager of the only homeless shelter on the island. “They need to be off island. Their immigration appointments are not here.”

Ms. Belcastro said they would be moved elsewhere, but when remains a question.

A man named Luis who had journeyed from the northern Venezuelan state of Lara with nine family members — including his wife, brothers and cousins — said they traveled through seven countries before making it to San Antonio and boarding the flight to Massachusetts.

Luis, who did not want to share his surname out of concern for his safety, said that after spending three days in San Antonio, his family also encountered a blonde woman in the street who said her name was Perla. The woman, he said, told them she was affiliated with a foundation that helped transport refugees to sanctuary cities and could book them on a flight to Massachusetts. One caveat: They could not take any pictures.

When the pilot announced they were about to land on Martha’s Vineyard, the migrants were shocked, Luis said: “That’s the first time we heard that.” He broke down in tears when he got to the island.

Like other migrants, his family has paperwork from border authorities informing them to report to an immigration office within 15 days, and the man said he feared that his family had been tricked into flying to the island to then be deported.

Venezuelan migrants surrender to border officials once they cross into the United States, and later request asylum. Since the United States has no diplomatic relations with their home country, they are generally allowed to stay, rather than face expedited deportation like many migrants from Mexico and Central America.

After reaching their destinations, the migrants can remain in the United States for months or even years while they await the outcome of their asylum cases, and they are allowed to work while they pursue asylum claims. But they must comply with instructions to appear in court or check in with immigration authorities, or they jeopardize their cases.

Back in San Antonio, Luis Amador Castillo, 34, recalled that he and a friend, Francisco, had crossed the street to the McDonald’s near the shelter.

A woman handed them bottles of water and gift cards from the restaurant. Are you interested in a free hotel stay and a free flight to Massachusetts? she asked with a smile.

There are people waiting for you with food, shelter and ready to help you with whatever you need, the woman told them, Mr. Castillo recalled. Francisco jumped at the idea.

Mr. Castillo said he politely declined because he intended to stay in San Antonio for the time being and later travel to Houston to find work, he said.

He recalled that the name of the place she mentioned sounded funny at first. “She said it was Massa-something,” Mr. Castillo recalled on Thursday while standing outside a shelter run by the city.

Steps away from him, Xavier Lopez, 20, and his girlfriend, Maria Perez, 21, said they regretted missing a free flight. The pair left Venezuela in late May with their 2-year-old son, Santiago.

“We don’t have money to go anywhere. We are going to stay here until we figure out how to find transportation,” Mr. Lopez said. “If I knew there was a person offering flee flights to Miami, that would be ideal for us.”